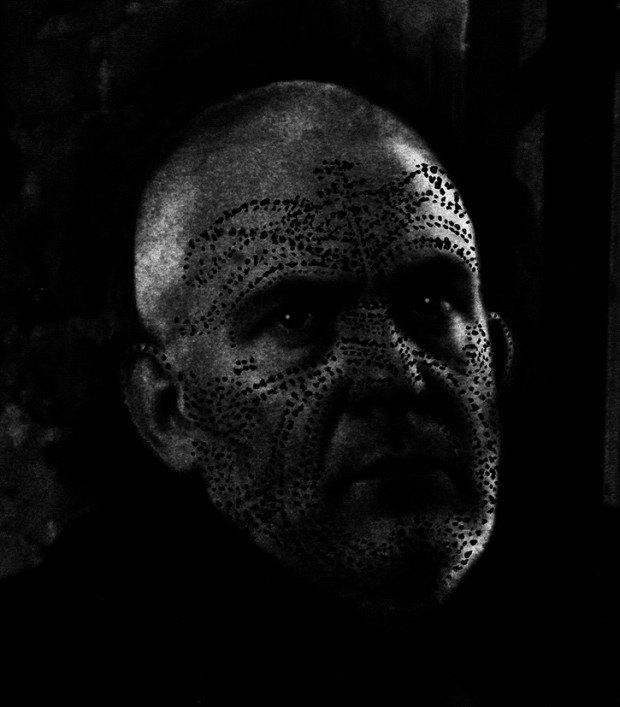 I love this chapter, because I have an inordinate fondness for the malapropism that accompanies “His Mark.” Like “The Chapel,” this chapter contains a graphic reproduction of the thing it’s describing:

But, once again, there’s something serious at stake. Let’s set the scene. Ishmael, as promised, has brought his harpooning friend to see Peleg and Bildad aboard the Pequod. The captains are reluctant to have a “cannibal” aboard, unless said cannibal has converted to Christianity: ” ‘Yea,’ said Captain Bildad in his hollow voice, sticking his head from behind Peleg’s, out of the wigwam. ‘He must show that he’s converted. Son of darkness,’ he added, turning to Queequeg, ‘art thou at present in communion with any christian church?'” (What does it mean that Bildad is hunkered down in a “wigwam,” I wonder.)

Ishmael, having been conned by these two into accepting a lower wage than he was expecting, tries a little verbal con-game of his own, attesting to the fact that Queequeg is a “deacon” in the “First Congregational Truth.” But just as Ishmael called Peleg’s bluff on the subject of Ahab’s being a “crowned king,” so here does Bildad call Ishmael’s bluff: ”   ‘Do tell, now,’ cried Bildad, ‘is this Philistine a regular member of Deacon Deuteronomy’s meeting? I never saw him going there, and I pass it every Lord’s day.’ ” Ishmael persists, but ultimately has to come clean:

Finding myself thus hard pushed, I replied. ‘I mean, sir, the same ancient Catholic Church to which you and I, and Captain Peleg there, and Queequeg here, and all of us, and every mother’s son and soul of us belong; the great and everlasting First Congregation of this whole worshipping world; we all belong to that; only some of us cherish some queer crotchets noways touching the grand belief; in that we all join hands.’

Peleg is tickled by this logic — “why Father Mapple himself couldn’t beat it, and he’s reckoned something” — and he tells Queequeg to forget about showing his conversion papers. Ishmael’s logic should remind us of his argument about turning pagan in order to be a good Christian, and like that earlier moment, it’s also making a serious, cosmopolitan point about the interplay of sameness and difference in human life. Peleg is willing to tolerate Queequeg’s difference, though he’s not interested enough in Queequeg as individual to get his name right:

I say, tell Quohog there — what’s that you call him? tell Quohog to step along. By the great anchor, what a harpoon he’s got there! looks like good stuff that; and he handles it about right. I say, Quohog, or whatever your name is, did you ever stand in the head of a whale-boat? did you ever strike a fish?’

And then Queequeg shifts the ground of the discussion from religious debate to economic practicality, much as Peleg and Bildad did in “The Ship.” He throws his harpoon with astonishing power and accuracy.

Peleg is so excited that he fumbles Queequeg’s name even further: “‘Quick, I say, you Bildad, and get the ship’s papers. We must have Hedgehog there, I mean Quohog, in one of our boats. Look ye, Quohog, we’ll give ye the ninetieth lay, and that’s more than ever was given a harpooneer yet out of Nantucket.'” And, you’ll note, there’s no dickering over Queequeg’s wages, which are considerably higher than Ishmael’s.

Queequeg signs the papers, having done this thing before apparently, copying “upon the paper, in the proper place, an exact counterpart of a queer round figure which was tattooed upon his arm.” Bildad isn’t happy, but ultimately Peleg — and economics — prevail, and we’re left with Bildad “very quietly overlooking some sail-makers who were mending a top-sail in the waist. Now and then he stooped to pick up a patch, or save an end of tarred twine, which otherwise might have been wasted.”

What’s at stake in the “Queequeg / Quohog / Hedgehog” verbal humor? Like Ishmael in “The Spouter-Inn,” Peleg and Bildad are forced to confront radical difference, and their response is to try to render it familiar. So “Queequeg” becomes “Quohog” — the hard-shelled clam that’s common on Nantucket and was probably in the chowder that Queequeg and Ishmael ate in the chapter of that name.

The chapter is nicely read by David Coslett, and the illustration by Brian Catling evokes the “otherness” in Queequeg’s visage that enables Peleg to identify him immediately as a “cannibal.” The illustration is called I Queequeg. Visit the site to see a high resolution version.