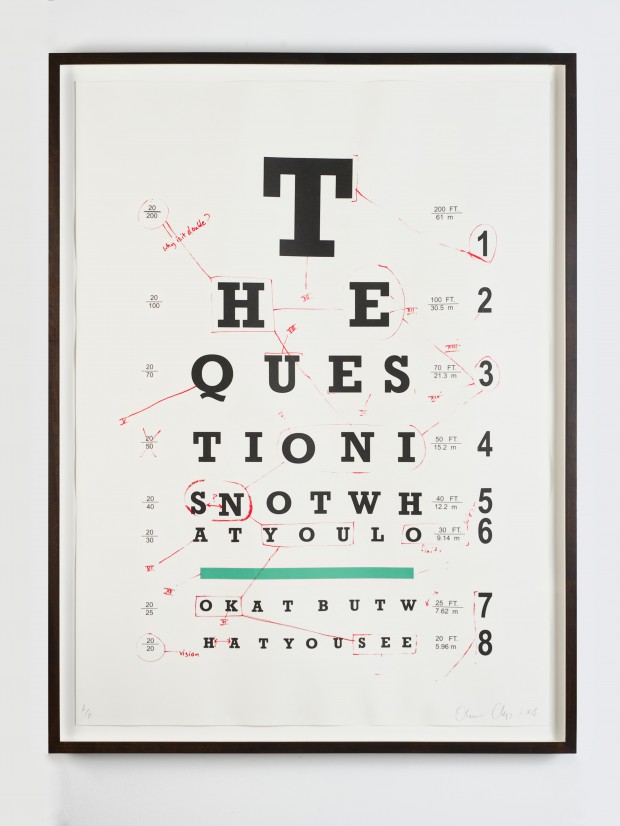 In this chapter, Ishmael braves the “driving sleet and mist” to visit “a Whaleman’s Chapel,” much as Melville did himself before going a-whaling in January 1841. Death looms over this chapter as it did over the opening paragraphs of Ishmael’s narrative, because immediately on entering he encounters a set of cenotaphs that memorialize sailors who were lost at sea. Ishmael remembers that the inscriptions went something like this:

Sacred
To the Memory
of
ROBERT LONG, WILLIS ELLERY, NATHAN COLEMAN, WALTER CANNY, SETH MACY, AND SAMUEL GLEIG,
Forming one of the boats’ crews of the Ship Eliza
Who were towed out of sight by a Whale,
On the Off-shore Ground in the Pacific, December 31st, 1839.
This Marble Is here placed by their surviving Shipmates.

What’s interesting about a cenotaph is that it marks a different kind of absence than a grave in which a body or an urn of ashes is interred. Indeed, in the inscription quoted above, the cenotaph memorializes the presumed demise of sailors who were “towed out of site by a Whale.” Some uncertainty hovers over the sailors’ fates, and this cenotaph attempts to bring closure by providing a place for surviving relatives and friends to mourn together.

When you read the text of the novel, you find that these cenotaphs are simulated typographically, even though Ishmael says he “do[es] not pretend to quote.” When i teach the novel, I suggest that students should think about these reproductions in the same way that they think about inset stories, plays-within-plays, or the “boggy, soggy, squitchy picture” in “The Spouter-Inn” chapter. Indeed, whenever you encounter an embedded aesthetic object in a text, you should see it as a moment of self-consciousness in which the author is inviting you to use it to reflect what is going on in the text as a whole.

For example, the play that’s performed within Shakespeare’s play A Midsummer Night’s Dream — “The most lamentable comedy and most cruel death of Pyramus and Thisbe,” later described as “A tedious brief scene of young Pyramus and his love Thisbe, very tragical mirth” — reminds the audience of the road not taken in the play as a whole: the death or confinement of Hermia for defying her father’s order to marry Demetrius. 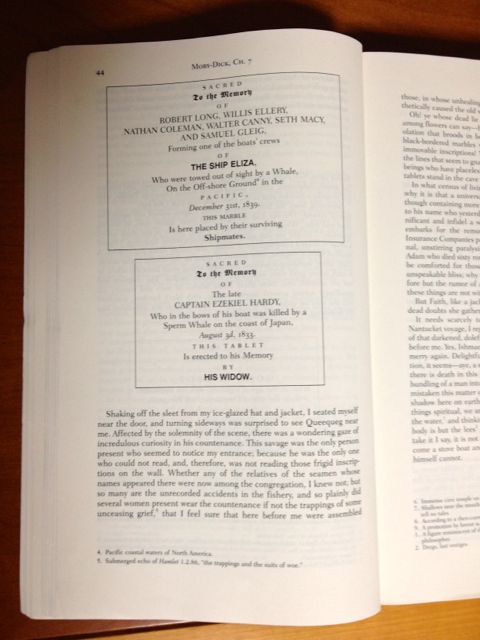 My thinking about the chapter has also been shaped by a paper submitted in a seminar on Moby-Dick that I taught some years ago, never mind how long precisely, by Meg Hammond, a TA for Writing New York. Meg contextualized the chapter by examining nineteenth-century memorial practices and suggested that we might read the novel as a whole as a kind of cenotaph — a very odd cenotaph that isn’t bound by the space limitations of a marble tablet.

You can still visit the Seaman’s Bethel, the chapel in New Bedford, Massachusetts, that Melville visited. For more about the chapel and its link to Melville, see this page on the National Park Service’s website.

The chapter is marvelously rendered by Keith Collins, complete with appropriate sound effects. The visual accompaniment today is a silkscreen print by Oliver Clegg entitled THE QUESTION IS NOT WHAT U LOOK AT BUT WHAT YOU SEE? (2008; 90 x 120cm?silkscreen print on cartridge paper). It was photographed by Nicole Heiniger and is provided to the “Big Read” ?courtesy of the artist. Visit the site to see it in high resolution.