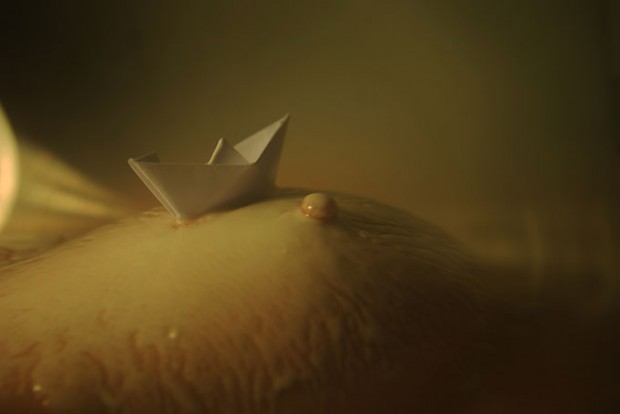 “Chowder” is unlike most of the other chapters in Melville’s novel. Why? Because it has a woman in it! In this case, it’s Mrs. Hosea Hussey, the proprietress of an inn called “The Try Pots,” to which our dynamic duo have been referred by Peter Coffin, the landlord of the Spouter-Inn. Ishmael continues to see ominous symbolism surrounding him at every turn:

Two enormous wooden pots painted black, and suspended by asses’ ears, swung from the cross-trees of an old top-mast, planted in front of an old doorway. The horns of the cross-trees were sawed off on the other side, so that this old top-mast looked not a little like a gallows. Perhaps I was over sensitive to such impressions at the time, but I could not help staring at this gallows with a vague misgiving. A sort of crick was in my neck as I gazed up to the two remaining horns; yes, two of them, one for Queequeg, and one for me. It’s ominous, thinks I. A Coffin my Innkeeper upon landing in my first whaling port; tombstones staring at me in the whalemen’s chapel; and here a gallows! and a pair of prodigious black pots too! Are these last throwing out oblique hints touching Tophet?

I was called from these reflections by the sight of a freckled woman with yellow hair and a yellow gown, standing in the porch of the inn, under a dull red lamp swinging there, that looked much like an injured eye, and carrying on a brisk scolding with a man in a purple woollen shirt.

And so it turned out; Mr. Hosea Hussey being from home, but leaving Mrs. Hussey entirely competent to attend to all his affairs.

Indeed, she proves formidable enough to make leave his harpoon with her instead of bringing it up to his room. And, by Ishmael’s account, she makes an amazing chowder. Two varieties no less: clam and cod. Sadly, neither Ishmael nor Melville has seen fit to provide us with the recipes.

As for females in the novel, they are indeed few and far between. We’ve seen sisters invoked already in “The Chapel” and in “Wheelbarrow.” You’ll meet another woman in “All Astir,” and there are references to wives in the first “Knights and Squires” chapter, in “The First Lowering,” and most significantly in “The Symphony.” Oh, and there’s several females present in “The Grand Armada.” You’ll see.

Today’s chapter is read by Peter Burgess. The accompanying image, “The Whiteness of the Whale” (2012), is by the London-based artist Samantha Sweeting. I like this image and may well write about it in a future post about the novel’s appropriation of the idea of domesticity and its treatment of gender, but for now I wonder why it accompanies a chapter called “Chowder” rather than the chapter with which it shares a title. Though maybe it’s appropriate, given that this is one of the few chapters that includes a woman in the novel. Go to the “Big Read” site to see it in higher resolution.