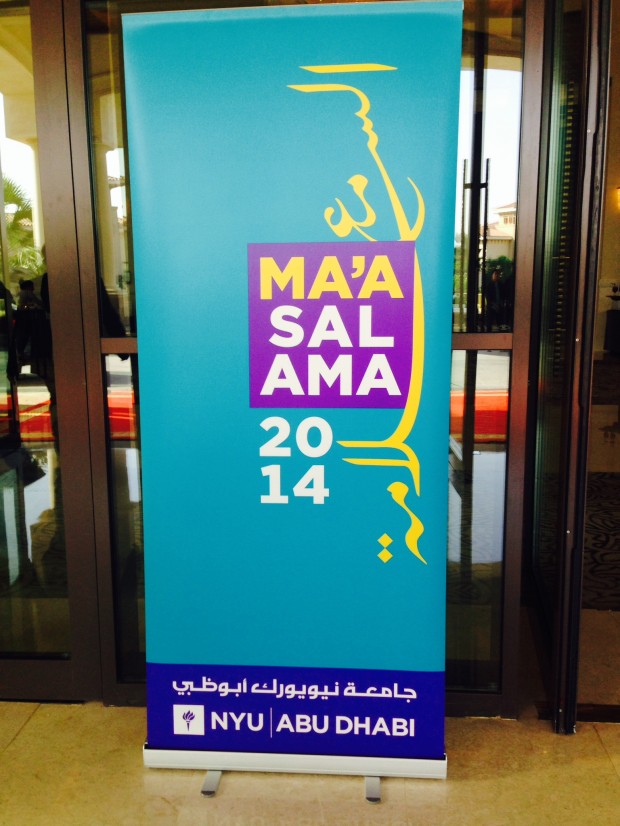 I had the honor of serving in the “color guard” during the inaugural NYU Abu Dhabi commencement today, which meant that I got to carry the NYU NY flag at the head of the procession of graduating seniors as they entered the hall. (The other flags represented the US, the UAE, and NYUAD.) 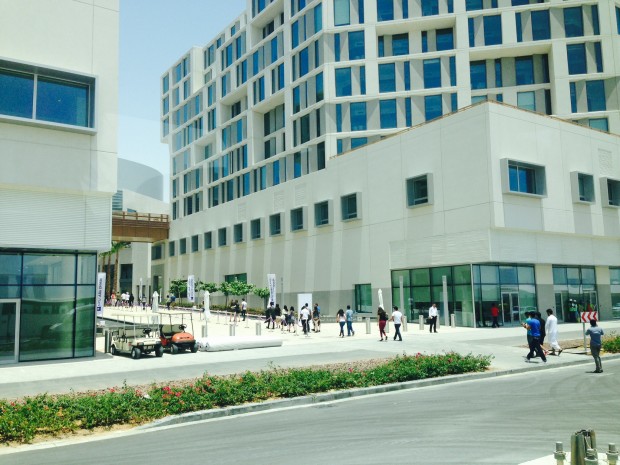 Yesterday, as I rode to the rehearsal at the gymnasium of the new Saadiyat campus, I had a feeling of déjà vu: four years earlier, I had ridden on buses out into the desert with many of these seniors during their candidate weekends, when they were still just prospective students. In the years since, it’s been a privilege to get to know many of them and have some of them in my classes.

A colleague, speaking at the Arts & Humanities “faculty farewell” to the students on Friday, remarked that although he did not come to NYUAD because of the students (having not met them before arriving here), it was because of them that he was committing his career to the institution.

I, in contrast, had been lucky of enough to know some of them in advance because of I took part in their candidate weekends, and it really was as a result of meeting our prospective students that I became hooked on the project. I described one of those weekends more than four years ago in a post called “New Friends in the Desert,” and the comments left by some of the candidates helped my colleagues in New York who were working on the NYUAD project to get the same sense of possibility that meeting these prospective students awakened in me. It was a pleasure to watch some of the students who left comments on that post walking across the stage this morning to receive their degrees.

I’ll be reflecting a lot more on the Abu Dhabi project in the days to come (as my family and I prepare to move to a faculty residence on the new campus on June 1). In the meantime, today belongs to the Class of 2014. I wish you could meet all of them, but you can get to know them a little by watching the videos below.

The first seven-minute video was shown today during the Commencement ceremony, and it will give you a sense of what our seniors are like and what they’ve learned in the past four years together.

During the video, the students refer to some of the research that they pursued as part of their senior-year capstone projects. I watched the following video being made outside my office during the last weeks of the spring term. It was shown at the “Faculty Farewell” luncheon on Friday.

One of the students featured in the first video is Alex Wang, who won a Rhodes Scholarship because of his research into migrant communities here. Here he is describing what it was like to receive the award.

I remember having breakfast with Alex at the Sama Tower dining room at an early moment in his first year, when things were seeming a little bit tough. Alex, like so many of his classmates, found a way to keep going when the going got tough. As students who spent all four of their years being our “seniors,” the members of the Class of 2014 have set an example for those who have come after. They’ve collaborated with the faculty and staff here to make NYU Abu Dhabi into a vibrant community and have learned what it means to be citizens of the world. I look forward to watching them take what they have learned here and spread its light in the years to come.

Mabrouk, Class of 2014! We will miss you. Please stay in touch. I look forward to seeing many of you back here for your fifth reunion. Those of you who are staying in the region should come back to see us on Saadiyat much, much sooner.