College professors teach their students that written arguments must be based on cited evidence. Depending on the field, that evidence can take the form of statistics, quotations from texts, first-hand accounts, archival materials, or scientific data. Students are told to check not only their spelling and grammar before submitting a paper, but also their facts. Indeed, they probably should check facts before checking the other things.

Luckily, Mr. Sorkin — or his editors — caught the most egregious error, in which he confused two football teams (that’s soccer for you in the USA) in the English Premier League: Manchester United and Manchester City. Mr. Al Mubarak was initially identified — erroneously — as the chairman of the former.

Thank goodness, no Manchester fans of either stripe seem to be readers of Mr. Sorkin’s blog. Making that mistake is a little bit like confusing the Yankees and the Mets. 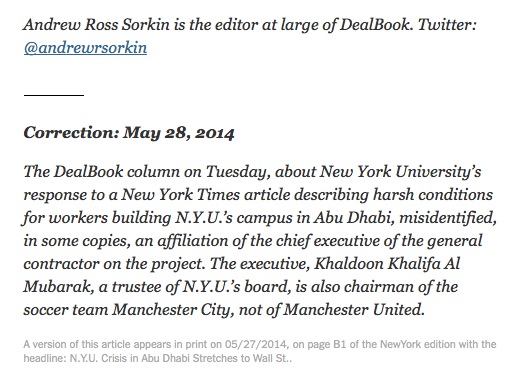 Unfortunately, in correcting that error, Mr. Sorkin repeated another error: that Mr. Al Mubarak’s firm was hired as the general contractor for the construction of  NYU’s campus in Abu Dhabi.

That’s patently false. Mr. Al Mubarak is the Group Chief Executive Officer & Managing Director of Mubadala, an investment and development company whose mandate is to assist the diversification of Abu Dhabi’s economy. Its relation to the NYUAD Saadiyat Campus is this: it is the client.

NYU and the Abu Dhabi government are partners in the creation of NYU Abu Dhabi, and Mubadala is the entity responsible for getting the campus built as part of that arrangement. Mubadala therefore hired a general contractor, which happens to be Al-Futtaim Carillion. If you click on the “New York University” link listed under “Major Projects” on the AFC website, you get this screen, which pretty much spells it out: 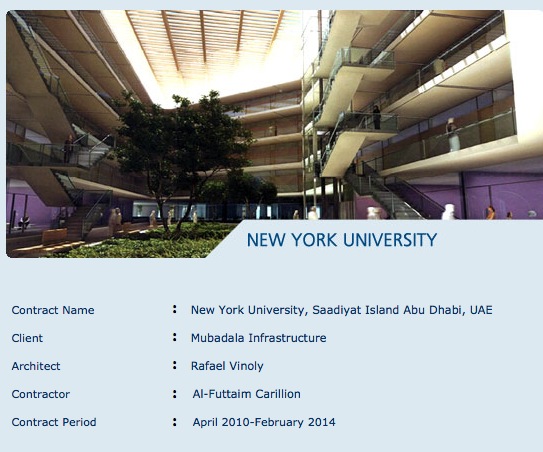 Since I’m assuming that Mr. Sorkin, a respected business journalist, knows the difference between a client and a contractor, I’m assuming he just didn’t bother to check his facts (just a few clicks on Google, Mr. Sorkin) before posting his piece. Anyone who had read any of the compliance reports submitted by Mott McDonald about the NYUAD project wouldn’t have made this mistake either (those reports probably should have been part of Mr. Sorkin’s homework too).

Call me a pedant for wanting my journalists to get their facts straight, but this last mistake is a little bit like asserting that John Kerry runs the Executive Branch of the U.S. government.

I’m waiting for the rewrite, but so far none seems to be forthcoming.