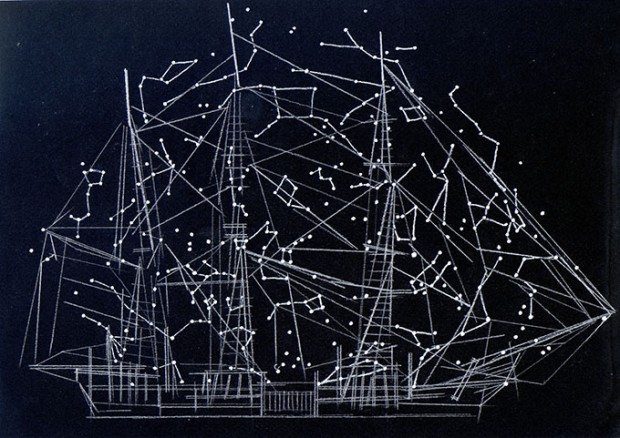 “The Ship” is one of my favorite chapters in Moby-Dick, because it uses comedy to dramatize so many of the novel’s major concerns.

From the opening words of the “Loomings” chapter — “Call me Ishmael” — it is clear that the Bible is going to be a crucial intertext for Moby-Dick — a text that Melville uses to augment his own and to extend its meanings. If, in other words, you didn’t know that a book called The Bible existed, you’d be missing a lot of what’s going on in Moby-Dick.

In “The Ship,” Melville uses Ishmael’s attempt to find a suitable whaling ship for himself and his buddy Queequeg to poke fun at what we might call the cultural uses of Christian religious logic. Ishmael had raised the the issue of predestination comically in the first chapter:

Though I cannot tell why it was exactly that those stage managers, the Fates, put me down for this shabby part of a whaling voyage, when others were set down for magnificent parts in high tragedies, and short and easy parts in genteel comedies, and jolly parts in farces — though I cannot tell why this was exactly; yet, now that I recall all the circumstances, I think I can see a little into the springs and motives which being cunningly presented to me under various disguises, induced me to set about performing the part I did, besides cajoling me into the delusion that it was a choice resulting from my own unbiased freewill and discriminating judgment.

“The Ship” continues to explore the question of how much agency human beings have in determining their own fates. First, Queequeg sends Ishmael off alone to find the ship, which causes Ishmael some trepidation since, in the business of whaling, he’s what my younger son would call a “noob.” Not to worry Queequeg tells him. Apparently,

Yojo earnestly enjoined that the selection of the ship should rest wholly with me, inasmuch as Yojo purposed befriending us; and, in order to do so, had already pitched upon a vessel, which, if left to myself, I, Ishmael, should infallibly light upon, for all the world as though it had turned out by chance; and in that vessel I must immediately ship myself, for the present irrespective of Queequeg.

Most of the ships he finds have ominous names, including the one on which he settles, the Pequod, whose name recalls a tribe of Indians massacred by the Puritans. The ship has a strange look: it’s been inlaid with whalebone, making it see like “a cannibal of a craft, tricking herself forth in the chased bones of her enemies. All round, her unpanelled, open bulwarks were garnished like one continuous jaw, with the long sharp teeth of the Sperm Whale, inserted there for pins, to fasten her old hempen thews and tendons to.”

On the ship, Ishmael meets two of its co-owners, Captains Peleg and Bildad, who, like many Nantucketers, are Quakers. Ishmael muses about the peculiar temperament of these whaling Quakers, pacifists who become bloodthirsty during the thrill of the hunt: “For some of these same Quakers are the most sanguinary of all sailors and whale-hunters. They are fighting Quakers; they are Quakers with a vengeance.”

Ishmael then launches into one of the most memorable passages in the book, a passage that indicates the Shakesperean ambitions that Melville had formed for his novel. It’s worth quoting at length:

So that there are instances among them of men, who, named with Scripture names — a singularly common fashion on the island — and in childhood naturally imbibing the stately dramatic thee and thou of the Quaker idiom; still, from the audacious, daring, and boundless adventure of their subsequent lives, strangely blend with these unoutgrown peculiarities, a thousand bold dashes of character, not unworthy a Scandinavian sea-king, or a poetical Pagan Roman. And when these things unite in a man of greatly superior natural force, with a globular brain and a ponderous heart; who has also by the stillness and seclusion of many long night-watches in the remotest waters, and beneath constellations never seen here at the north, been led to think untraditionally and independently; receiving all nature’s sweet or savage impressions fresh from her own virgin voluntary and confiding breast, and thereby chiefly, but with some help from accidental advantages, to learn a bold and nervous lofty language — that man makes one in a whole nation’s census — a mighty pageant creature, formed for noble tragedies. Nor will it at all detract from him, dramatically regarded, if either by birth or other circumstances, he have what seems a half wilful overruling morbidness at the bottom of his nature. For all men tragically great are made so through a certain morbidness. Be sure of this, O young ambition, all mortal greatness is but disease. But, as yet we have not to do with such an one, but with quite another; and still a man, who, if indeed peculiar, it only results again from another phase of the Quaker, modified by individual circumstances.

Once you meet him and hear his “bold and nervous lofty language,” you’ll realize that Ishmael is actually setting the stage for Ahab in this passage.

Ishmael explains to us how seaman aboard a whaleship are paid. Each is put down for a particular “lay,” meaning a fraction of “the clear net proceeds of the voyage.” Though he’s new to whaling, he figures that his previous experience at sea might gain him the 200th lay, in other words 1/200th of the profits of the voyage. But as the chapter proceeds Bildad and Peleg go through a “good cop, bad cop” routine that leaves Ishmael with the 300th lay — and happy to have it.

“Bildad” and “Peleg” are Biblical names. “Bildad” is one of the sanctimonious neighbors in the Book of Job — a major intertext for Melville’s novel — who tells job that he must have done something to to incur God’s wrath (we readers know that Job is completely innocent). That derivation seems significant here. Meanwhile, I had always thought that the “Peleg” was kind of a joke, being one of many names among the “begets” in Genesis 10. But then I learned that “Peleg” is derived from a root that means “division” and that in the Bible it is during the reign of Peleg that “the earth is divided.” So probably that name tells us something about what’s going on in this chapter as well.

Their con game turns on a Biblical pun. Bildad is reading Matthew 6, when Ishmael turns up:

[19] Lay not up for yourselves treasures upon earth, where moth and rust doth corrupt, and where thieves break through and steal: [20] But lay up for yourselves treasures in heaven, where neither moth nor rust doth corrupt, and where thieves do not break through nor steal: [21] For where your treasure is, there will your heart be also.

So when Peleg asks Bildad what “lay” they should give to Ishmael, Bildad decides to use a Biblical derivation: ‘Thou knowest best,’ was the sepulchral reply, ‘the seven hundred and seventy-seventh wouldn’t be too much, would it? — “where moth and rust do corrupt, but lay — “‘ Ishmael, of course, is appalled, and Peleg plays the good cop, suggesting the 300th instead. Bildad then invokes the investors — “widows and orphans, many of them” — who will be deprived if the crew is overpaid. The two Quakers almost come to blows — or at least appear to — before things are settled. THe chapter dramatizes how easily religious logic can be used for purposes that are decidedly non-spiritual: here theology and economics mix uncomfortably.

Ishmael signs the agreement to ship aboard the Pequod and promises to bring his friend Queequeg the next day. But then he decides to ask about the ship’s actual captain, the one who will command her at sea — Ahab. What he hears from Peleg isn’t exactly comforting:

He’s a queer man, Captain Ahab — so some think — but a good one. Oh, thou’lt like him well enough; no fear, no fear. he’s a grand, ungodly, god-like man, Captain Ahab; doesn’t speak much; but, when he does speak, then you may well listen. Mark ye, be forewarned; Ahab’s above the common; Ahab’s been in colleges, as well as ‘mong the cannibals; been used to deeper wonders than the waves; fixed his fiery lance in mightier stranger foes than whales. His lance! aye, the keenest and the surest that out of all our isle! Oh! he ain’t Captain Bildad; no, and he ain’t Captain Peleg; he’s Ahab, boy; and Ahab of old, thou knowest, was a crowned king!

Another aspect of Christian religious logic that comes under scrutiny here is typology, which originated as a way of interpreting the Bible. In typological hermeneutics, the Old Testament is thought to provide types whose meaning is fulfilled only in New Testament antitypes. Think of a type as the die from which a coin is made, and the antitype as the coin. So, for example, Job can be seen as a type of Christ; Moses’ 40 days and 40 nights on the mountain are the type for Christ’s temptation for 40 days in the wilderness.

The type’s meaning is fulfilled by the antitype, but in crucial ways the meanings of the antitype are determined by the type.

So here’s the question: when you read names like “Ishmael” and “Ahab” in Melville’s novel, should you read them typologically? If you were reading an allegorical novel, you would, and many readers have accepted what seems like the novel’s invitation to allegory. I say, reader beware of allegory when reading Moby-Dick!

Ishmael, of course, was a school teacher, so he’s read his Bible and he can call Peleg’s bluff: as far as kings go, Ahab was ” ‘And a very vile one. When that wicked king was slain, the dogs, did they not lick his blood?'” he asks Peleg. So Peleg shifts his tack, warning Ishmael never to say that kind of thing aboard the Queequeg. Ahab, after all, “did not name himself,” though he can’t help remembering that and it was only the “the old squaw Tistig, at Gayhead, said that the name would somehow prove prophetic.”

Peleg tells Ishmael almost in passing about that “last voyage” when Ahab “lost his leg … by that accursed whale,” which has left the oldman “moody — desperate moody.” But, Peleg concludes, Ahab has a wife and a child and therefore “Ahab has his humanities!” Maybe, we’re thinking, but doesn’t he leave that wife and child behind an awful lot …

Ishmael is moved by the story, which “fill[s him] with a certain wild vagueness of painfulness concerning [Ahab].” Ishmael’s thoughts are soon “carried in other directions, so that for the present dark Ahab slipped my mind.” We, however, should heed well what we’ve learned in this chapter. Melville — or is it Ishmael? — has been sounding many of the notes that will resonate throughout the chapters to come.

The chapter is read for us today by Chad Harbach, author of the acclaimed novel The Art of Fielding, which pays homage to two of my favorite things: baseball and Melville. Click here to read our NYU colleague Richard Horwich’s review of the novel in Newsday and here to read an interview with Harbach in The Daily Beast.