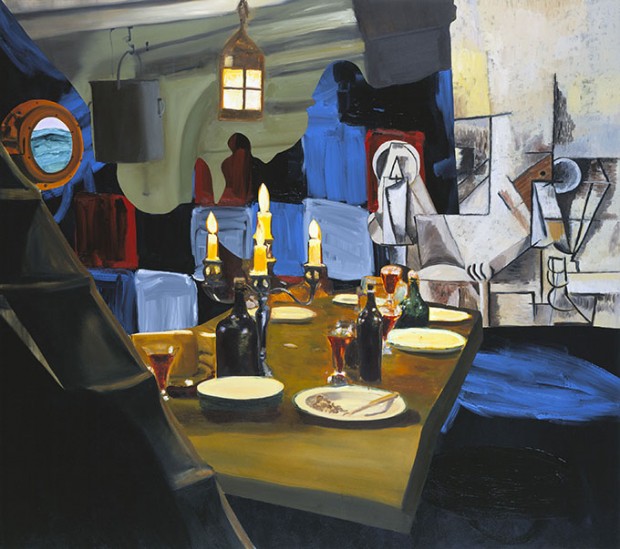 As I indicated in yesterday’s post on “The Ship,” Melville’s novel is animated by what we might think of as a dissident view of Christianity. The Bible is a major intertext for Moby-Dick, but Melville doesn’t have the same relation to the Bible that someone like, say, the Puritan writer Michael Wigglesworth does. When Wigglesworth cites the Bible in his widely read poem “The Day of Doom” (1662), he is using the citations to complete the meaning of his poem, which is essentially a sermon put in narrative form. Wigglesworth and the Bible “agree,” so to speak. Not true of Melville’s narrator Ishmael, who will sometimes make sly jokes that invoke a Biblical passage. When you look at the passage, you realize that Ishmael is writing against the grain of the Bible, making a joke at the Bible’s expense.

I’ve argued in an essay entitled “Cosmopolitanism and Zoroastrianism in Moby-Dick,” which appeared in the collection The Turn Around Religion in America, edited by Nan Goodman and Michael Kramer, that Melville uses ideas and imagery drawn from the Zoroastrian tradition (which he probably knew from reading the French philosophe Pierre Bayle) as a thematic wedge with which to dislodge the authority of Christianity.

The name of Moby-Dick‘s narrator, however, suggests another religious tradition that might be used to explore the limits of Christian belief: Islam. “Ishmael,” after all is a revered figure in the Muslim tradition. In his study The Cultural Roots of American Islamicism, Timothy Marr argues that

Melville [authorized] his early narrators with orientalist privileges to lend them leeway to perform their own exotic identities. Investing his narrators in the guise of Islamicist infidels who transgressed against Protestant conventions formed another major strand of his literary characterization. Melville’s boldest assumption of this figuration was the narrator of Moby-Dick‘s proclamation to “Call me Ishmael,” which announced his affiliation with an individual most widely known in the nineteenth century as the Abrahamic ancestor of the Arabs. …

Marr reminds us that “in the Book of Genesis, God had unjustly cast Ishmael out of the family of Abraham and denied his progeny the promise of God’s covenant with Israel. When Abraham interceded on behalf of Ishmael, God promised that his descendants would greatly multiply and produce twelve princes and a great nation, viewed by Christians as one of the divine sanctions for the existence of Islam.” According to Marr, “Exclusive critical focus on the biblical Ishmael- the “wild ass of a man” whose “hand is against every man and every man’s” – has led to a neglect of the islamicist perspective signified by Melville’s assumption of Ishmael as his narrator’s identity.” Marr concludes that “by annunciating Ishmael as his narrative standpoint, Melville empowered himself to criticize Christian civilization from a position that, although biblical, was also one aligned with the traditional enemies of Christianity, one from which he could speak with the contentious power of an established outsider.”

Melville had read Thomas Carlyle’s Heroes and Hero-Worship (1840), which includes a lecture about “Mahomet” entitled “The Prophet as Hero,” and in her study Melville’s Orienda, Dorothee Metlitsky Finkelstein argues that Carlyle’s view of the hero was an important influence on Melville’s conception of Ahab. Melville may well have known the essay “The Hero as a Man of Letters,” in which Carlyle writes of the nineteenth-century writer: “He wanders like a wild Ishmaelite, in a world of which he is as the spiritual light, either the guidance or the misguidance!”

But I’m not sure that Melville’s consideration of Islam goes much further than that. He would visit the Holy Land and write more about Islam in his long poem Clarel, but that was some years after writing Moby-Dick. And in “The Ramadan” chapter, he borrows the name of Islam’s holy month but reduces it to a ceremony conducted on a single day. Like “The Spouter-Inn” chapter, the cross-cultural confusions of “The Ramadan” provide an occasion for some slapstick humor as Ishmael, worried that his friend won’t respond to knocking at the door, has the landlady break the door down.

As in many of the novel’s chapters, however, the comedy masks some serious concerns. Ishmael is skeptical of most religious rituals, whether Christian or not, which he suggests have the effect of causing dyspepsia. He asks whether Queequeg has ever suffered from dyspepsia. So Queequeg launches into a story about “one memorable occasion. It was after a great feast given by his father the king, on the gaining of a great battle wherein fifty of the enemy had been killed by about two o’clock in the afternoon, and all cooked and eaten that very evening.”

Ishmael can’t quite stomach this level of detail: ” ‘No more, Queequeg,’ said I, shuddering; ‘that will do;’ for I knew the inferences without his further hinting them.” It’s easy enough to say, “Better sleep with a sober cannibal than a drunken Christian,” and even to be tolerant of religious practices if they involve bowing to a little jet-black idol. But this chapter indicates there are limits to Ishmael’s toleration, places where his imagination simply doesn’t want to go. Perhaps for good reason.

What does this little textual moment indicate to us about the limits of cosmopolitan toleration for difference?

Writing as I am these days from Abu Dhabi in the United Arab Emirates, I’m interested in finding out more about the influence of Islamic thought on Melville’s novel. I’m hoping that this will be one of the topics that we explore in my class on Moby-Dick next term.

“The Ramadan” is read by Warren Cole. Today’s illustration is Herman Melville (2005; oil on canvas, 183.5 x 212 cms) by Dexter Dalwood (copyright the artist and Gagosian Gallery).