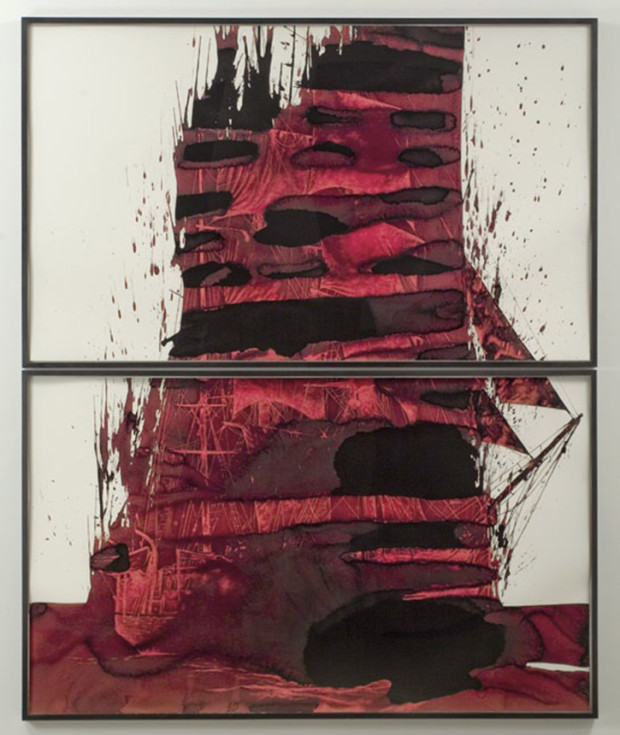 With “Stowing Down and Clearing Up,” Ishmael brings to a close the sequence of chapters devoted to descriptions of the practices required to kill, butcher, and commodify a whale. After the hellish imagery of “The Try-Works” and the Orientalism of “The Lamp,” we get a return to domesticity, with a little bit of philosophical reflection serving as an epilogue. Ishmael compares the whale oil to “hot punch,” which is put into barrels and then stored below. The storage of the oil will provide a narrative crux later in the voyage, when Starbuck notices that some of the barrels have been leaking.

Ishmael describes the remarkable transformation of the Pequod that takes immediately afterward, as the ship is returned to a pristine condition that belies its recent activities of slaughter and butchery. Among its properties, Ishmael tells us, “sperm oil possesses a singularly cleansing virtue” so that the decks of a whaler”never look so white as just after what they call an affair of oil.” The crew likewise cleans itself up, performing ablutions so that the sailors look “fresh and all aglow, as bridegrooms new-leaped from out the daintiest Holland.”

Ishmael thus creates certain continuities with the thematic and symbolic patterns laid down in  “A Squeeze of the Hand,” not the least of which is that this interlude of domestic bliss, in which the sailors can “humorously discourse of parlors, sofas, carpets, and fine cambrics,” cannot last: the ship is always on the lookout for more whales to slaughter. Here, however, in lieu of the earlier chapter’s vision of “long rows of angels in paradise,” Ishmael ends with a piece of non-Christian religious belief, evoking the idea of “metempsychosis” — the transmigration of souls — to describe the cycle of life aboard a whaleship. Wasn’t that the ancient philosopher of metempsychosis, he asks, reincarnated as “a green simple boy,” whom Ishmael taught “to splice a rope” during that last voyage?

“Stowing Down and Clearing Up” is read by Gailen Cullen. Today’s illustration, Ahab’s America Pequod (2010) is by Tony de Los Reyes, who also served as a reader on Day 82, “The Honor and Glory of Whaling.” The image vividly evokes the state of the Pequod’s decks (and all they may be said to represent) before the process of “stowing down and clearing up” takes place.