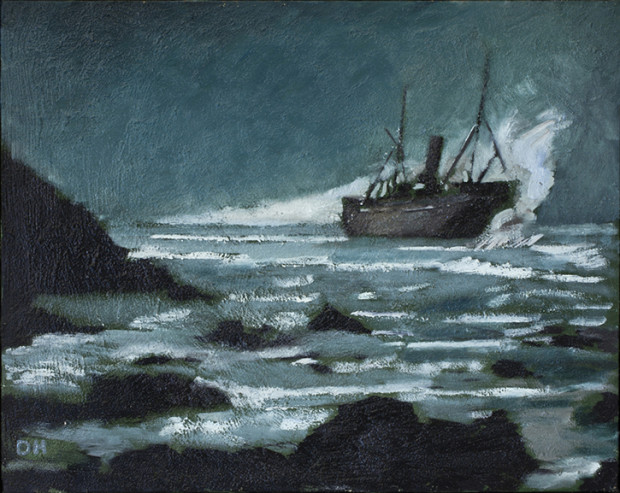 In my discussion of “The Pequod Meets the Rosebud,” I suggested that the comic tone of the gam chapters thus far would eventually shift to something else. In “The Castaway,” Ishmael foreshadows this change and raises the issue, once again, of predestination. Picking up the idea of reversal of circumstance broached in the previous chapter — the low made high, the corruptible made incorruptible — Ishmael begins by telling us:

some few days after encountering the Frenchman … a most significant event befell the most insignificant of the Pequod‘s crew; an event most lamentable; and which ended in providing the sometimes madly merry and predestinated craft with a living and ever accompanying prophecy of whatever shattered sequel might prove her own.

Pip, the young black cabin boy, has already emerged as a figure of contradiction. Ishmael reminds us that we “have heard of him before; ye must remember his tambourine on that dramatic midnight, so gloomy-jolly.” Ishmael tells us that Pip had a “bright” intellect and admonishes us not to smile with incredulity at the idea that a “little black” could be “brilliant.” Pip’s intellect links him both to Ishmael and to Ahab, and when, in the course of the second lowering described in this chapter, Pip is thrown overboard, the experience is far more damaging than it might have been to a lesser intellect.

Unused to being in a whaleboat, a nervous Pip jumps overboard when a harpooned whale raps the whaleboat, becoming entangled in the whale line and forcing Stubb to order Tashtego to cut the whale loose. Stubb isn’t happy, and he reminds Pip that “a whale would sell for thirty times what you would, Pip, in Alabama.” Slavery rears its head again, but Ishmael also reminds us that slavery is just an example of the ways in which the desire for money often trumps other impulses: “Hereby perhaps Stubb indirectly hinted, that though man loved his fellow, yet man is a money-making animal, which propensity too often interferes with his benevolence. ”

Well, Pip goes over again, and this time he is left behind, though Ishmael suggests that Stubb is less hard-hearted than his remark might suggest and had assumed that Pip would be pick up by the whaleboat trailing then.

Pip is eventually recovered but the experience drives him mad. Ishmael believes it is because Pip has seen something that is beyond human comprehension:

The sea had jeeringly kept his finite body up, but drowned the infinite of his soul. Not drowned entirely, though. Rather carried down alive to wondrous depths, where strange shapes of the unwarped primal world glided to and fro before his passive eyes; and the miser-merman, Wisdom, revealed his hoarded heaps; and among the joyous, heartless, ever-juvenile eternities, Pip saw the multitudinous, God-omnipresent, coral insects, that out of the firmament of waters heaved the colossal orbs. He saw God’s foot upon the treadle of the loom, and spoke it; and therefore his shipmates called him mad. So man’s insanity is heaven’s sense; and wandering from all mortal reason, man comes at last to that celestial thought, which, to reason, is absurd and frantic; and weal or woe, feels then uncompromised, indifferent as his God.

After his rescue, Ishmael tells us, the little negro went about the deck an idiot; such, at least, they said he was.” Ishmael knows better. Pip has the madness of one of Shakespeare’s fools. Pip has had a glimpse of what lies beyond Ahab’s “pasteboard mask,” and Ahab will eventually recognize in Pip a kindred spirit. Both of them are mad, but both of them retain the faculty of reason — reason inflected by madness. Many commentators have likened the relationship that emerges between them to the relationship that Shakespeare depicts between Lear and his fool, the bitterest of all the fools in Shakespeare’s plays. We’ll soon see an example of Pip’s reasoning madness in the wonderful chapter called “The Doubloon,” a chapter in which, you’ll see, I take a special interest.

“The Castaway” is read by Carolyn Brown. The illustration, The Wreck of the Christadora (1989; oil on canvas, 16?x20?), is by Duncan Hannah.