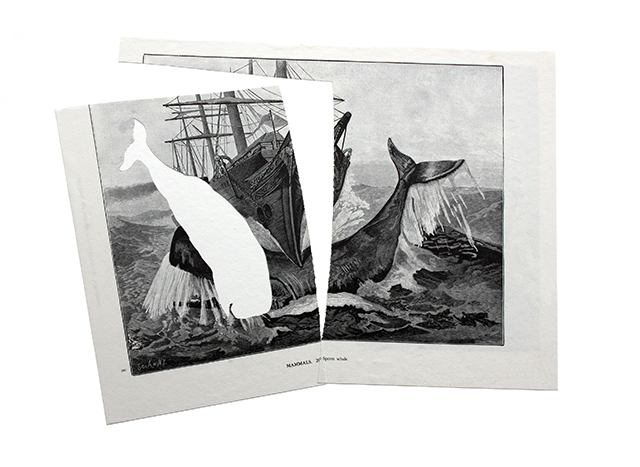 We’re still in the middle part of the voyage, so the gam chapters can still be opportunities for comedy. (That’ll change.)

In the last gam chapter, “The Pequod Meets the Virgin ,” German whalers fall under Ishmael’s satirical gaze; here, it’s the French. The air stinks, which means that there are dead whales around, likely one of the “drugged” whales left behind during the chase described in the “Grand Armada” The Pequod comes a cross a French whaler with a figurehead in the shape of a wooden rosebud, which is busy engaged in trying to strip two dead whales, much to the chagrin of the whaler’s first mate. The crafty Stubb is particularly interested in one of the two whales at the ship’s side, a “blasted whale” that Ishmael describes as “one of those problematical whales that seem to dry up and die with a sort of prodigious dyspepsia, or indigestion; leaving their defunct bodies almost entirely bankrupt of anything like oil.”

Moby-Dick is an early example of what we might call the novel of expertise: part of its project is instruct its readers in the practices used by whalers. (Twentieth-century examples might include Hemingway’s descriptions of fly-fishing or Ian Fleming’s descriptions of James Bond’s card games or skiing skills.) Stubb cuts into the blasted whale as soon as he’s towed it out of sight of the Rosebud and is soon rewarded:

Dropping his spade, he thrust both hands in, and drew out handfuls of something that looked like ripe Windsor soap, or rich mottled old cheese; very unctuous and savory withal. You might easily dent it with your thumb; it is of a hue between yellow and ash color. And this, good friends, is ambergris, worth a gold guinea an ounce to any druggist. Some six handfuls were obtained; but more was unavoidably lost in the sea, and still more, perhaps, might have been secured were it not for impatient Ahab’s loud command to Stubb to desist, and come on board, else the ship would bid them good bye.

To the expert goes the spoils.

“The Pequod Meets the Rose-Bud” is read by Meri Ratzel, a research assistant at the Provincetown Cewnter for Coastal Studies, together with Ben Haas The illustration, No. 20: “Sperm Whale” (2011, collage on paper), is by Nathalie Guinamard.