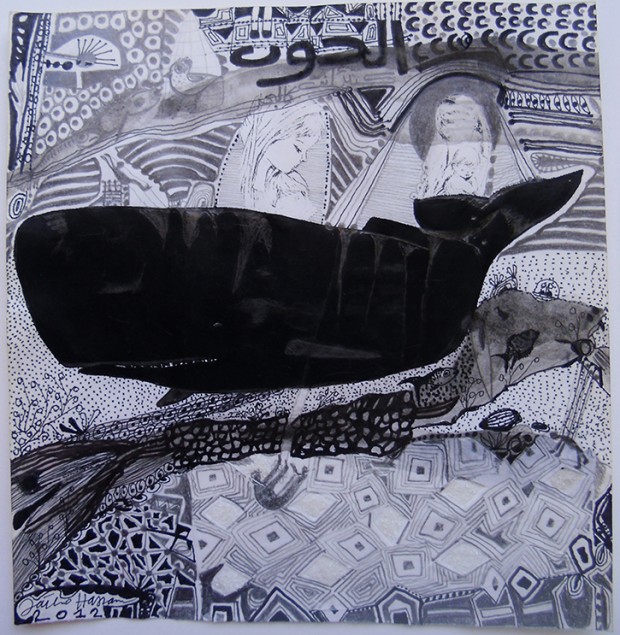 The captain of the German ship, a Dutchman named Derick De Deer, is eager to gam because, despite being a whaler, he’s run out of oil, and Ishmael jokes that the German ship deserves its name of Jungfrau (“Virgin”) because it’s “a clean one (that is, an empty one).”

No sooner, however, has the Pequod obliged than whales are spotted, leading to a frantic competition between whaleboats from the two ships. And, just as Moby-Dick veers in tone wildly from chapter to chapter (at least in the first 2/3 or so the novel), this chapter contains some grim moments, including this pointed reminder of the brutality of whaling and what Ishmael takes to be the hypocrisy of much religious belief:

As the boats now more closely surrounded him, the whole upper part of his form, with much of it that is ordinarily submerged, was plainly revealed. His eyes, or rather the places where his eyes had been, were beheld. As strange misgrown masses gather in the knot-holes of the noblest oaks when prostrate, so from the points which the whale’s eyes had once occupied, now protruded blind bulbs, horribly pitiable to see. but pity there was none. For all his old age, and his one arm, and his blind eyes, he must die the death and be murdered, in order to light the gay bridals and other merry-makings of men, and also to illuminate the solemn churches that preach unconditional inoffensiveness by all to all.

The whale that has been killed is an old whale who bears the scars of battle with whalers; indeed the Pequod‘s sailors discover inside his flesh “the entire length of a corroded harpoon.” The whole adventure is somewhat misbegotten, as the whale’s body suddenly sinks, despite the fact that its blubber should make it buoyant — a phenomenon that elicits the usual learned commentary from Ishmael.

From the comic to the gruesome to the encyclopedic, the chapter goes, ending on a comic note as Derick starts off suddenly on another chase, a wild goose chase it will turn out, because he has mistaken the spout of a Fin-Back for the spout of a Sperm Whale, and a Fin-Back Ishmael tells us “is a species of uncapturable whales.” There’s an alleogry of something in that, and Ishmael is happy to provide us with a moral to this chapter’s story: “Oh! many are  the Fin-Backs, and many are the Dericks, my friend.”

“The Pequod Meets the Virgin” is read by Meg Guroff, editor of Power Moby-Dick: The Online Annotation, which offers a treasure trove of information about the novel and is a worthy supplement to the Norton Critical Edition

. Follow her on Twitter: @powermobydick. The illustration is by Fathi Hassan and is presented courtesy of Rose Issa Projects.