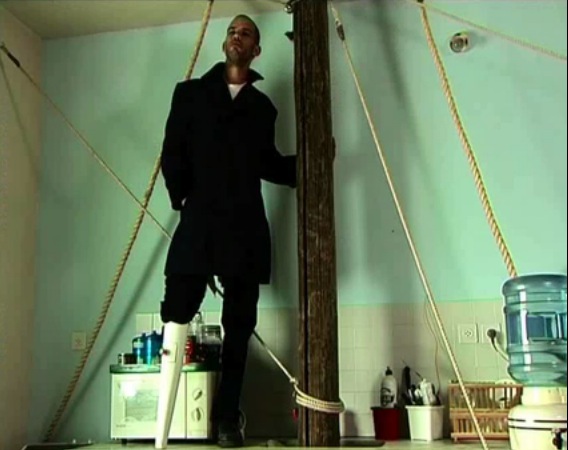 The five-chapter-long narrative digression on the past, present, and future of the whale is now over: “Ahab’s Leg” brings back to our plot (such as it is) and the immediate aftermath of the gam with the Samuel Enderby. During his precipitous return to the Pequod, Ahab seems to have damaged his ivory leg. Never content to keep things simple, however, Ishmael immediately gives us a flashback, recalling that

it had not been very long prior to the Pequod’s sailing from Nantucket, that he had been found one night lying prone upon the ground, and insensible; by some unknown, and seemingly inexplicable, unimaginable casualty, his ivory limb having been so violently displaced, that it had stake-wise smitten, and all but pierced his groin; nor was it without extreme difficulty that the agonizing wound was entirely cured.

Ahab can thus add near-castration to his litany of grievances against whales in general and Moby Dick in particular. And the present occasion — Ahab’s ordering the ship’s carpenter and blacksmith to fashion a completely new leg out of the best bieces of “jaw-ivory (Sperm Whale) so far accumulated on the voyage — gives Ishmael to meditate further on the nature of Ahab’s monomania, and he attributes to his captain the belief that “the ancestry and posterity of Grief go further than the ancestry and postetrity of joy” and that “the ineffaceable, sad birth-mark in the brow of man, is but the stamp of sorrow in the signers.” Ishmael believes Ahab’s temperament to be fundamentally pessimistic: Ahab believes that his personal woe is not simply personal but reflects the ontological state of both gods and men.

This chapter is also a long-delayed sequel to the “The Ship,” in which Captain Peleg offered reasons for Ahab’s lack of visibility during the ship’s preparations that “appeared by no means adequate.” Ishmael now reveals that Ahab’s injury accounted for his reclusiveness and that Ahab’s “circle” on shore “conspired … to muffle up the knowledge of this thing from others.” Ishmael does not reveal how it is that he and other sailors aboard the ship learned Ahab’s secret, and Ishmael dismisses the matter — and the metaphysical speculations it has occasioned — peremptorily with a simple “Bu be all this as it may …”

It’s an enigmatic chapter, as much for what Ishmael chooses not to reveal as for what he does.

“Ahab’s Leg” is read by poet and novelist Joyelle McSweeney, who is Associate Professor of English at the University of Notre Dame. She is the author of two volumes of poetry, The Red Bird (2002) and The Commandrine and Other Poems (2004),  and of two novels,  Nylund, the Sarcographer (2007), a “baroque-noir” and Flet (2008), a work of science fiction. Her most recent publication is the collection Percussion Grenade: Poems & Plays (2012).

Today’s illustration is a comic video that was shown to me by one of my teaching assistants some years ago — never mind how long precisely. It’s called Moby Dick (2007), and it’s by Israeli video artist Guy Ben-Ner. Here’s a description of the video from YouTube and UbuWeb:”Trapped between the whiteness of the whale and the terrifying whiteness of the kitchen, “Moby Dick” is a Slapstick version of the novel, performed by the artist and his daughter at home. A second sea adventure that starts (as all sea adventures do) with the hero sailing away and leaving his family behind. yet another unfulfilled fantasy.” The stills shown above and below give you some idea of what to expect: 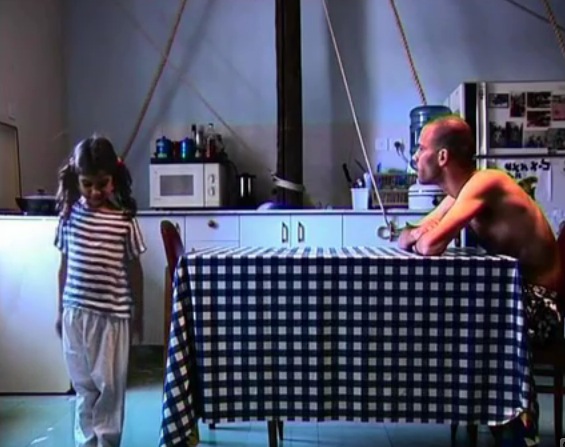