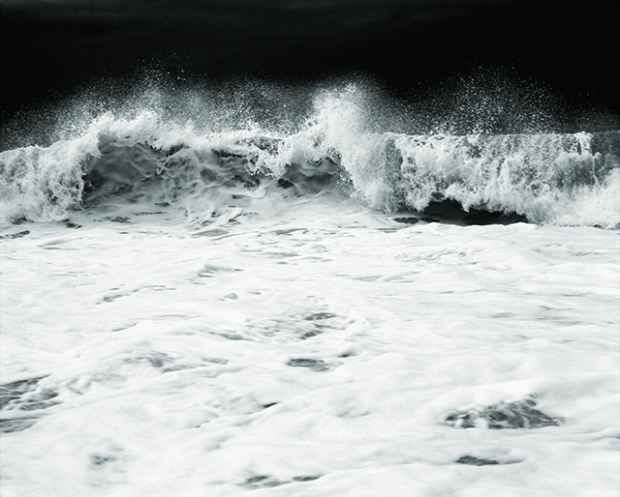 Ishmael begins: “When gliding by the Bashee isles we emerged at last upon the great South Sea; were it not for other things, I could have greeted my dear Pacific with uncounted thanks, for now the long supplication of my youth was answered; that serene ocean rolled eastwards from me a thousand leagues of blue.”

According to The Edinburgh Gazeteer (1822), the Bashee Islands are “five islands in the Chinese sea, north of which are two rocky inlets. They were visited by Dampier, the English navigator, in 1687, and named by him Orange, Monmouth, Grafton, Goats, and Bashee Island.” The editors of the Norton Critical Edition, drawing on the work of Merton Sealts and Mary Bercaw, list Williams Dampier’s A New Voyage Around the World (London,1697-1707) as one of  Melville’s sources for Moby-Dick. The version of Dampier’s book available at Project Gutenberg Australia contains this map: 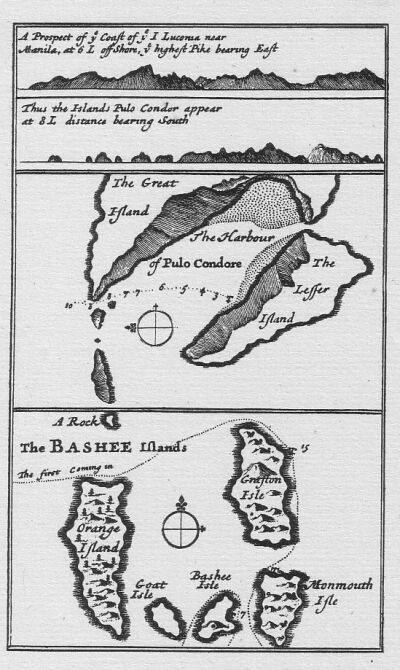 Dampier describes his naming of the islands:

The sixth day of August we arrived at the five islands that we were bound to and anchored on the east side of the northernmost island in 15 fathom, a cable’s length from the shore. Here, contrary to our expectation, we found abundance of inhabitants in sight; for there were three large towns all within a league of the sea; and another larger town than any of the three, on the back side of a small hill close by also, as we found afterwards. These islands lie in latitude 20 degrees 20 minutes north latitude by my observation, for I took it there, and I find their longitude according to our charts to be 141 degrees 50 minutes. These islands having no particular names in the charts some or other of us made use of the seamen’s privilege to give them what names we please. Three of the islands were pretty large; the westernmost is the biggest. This the Dutchmen who were among us called the Prince of Orange’s Island, in honour of his present Majesty. It is about seven or eight leagues long and about two leagues wide; and it lies almost north and south. The other two great islands are about four or five leagues to the eastward of this. The northernmost of them, where we first anchored, I called the Duke of Grafton’s Isle as soon as we landed on it; having married my wife out of his duchess’s family, and leaving her at Arlington House at my going abroad. This isle is about 4 leagues long and one league and a half wide, stretching north and south. The other great island our seamen called the Duke of Monmouth’s Island. This is about a league to the southward of Grafton Isle. It is about three leagues long and a league wide, lying as the other. Between Monmouth and the south end of Orange Island there are two small islands of a roundish form, lying east and west. The easternmost island of the two our men unanimously called Bashee Island, from a liquor which we drank there plentifully every day after we came to an anchor at it. The other, which is the smallest of all, we called Goat Island, from the great number of goats there; and to the northward of them all are two high rocks.

Dampier goes on to offer detailed descriptions of the islanders, their customs, and his dealings with them. Perhaps thinking of the liquor that Dampier mentions, Ishmael describes a “sugary musk” that wafts on the air from the islands and imagines that in their “sweet woods mild lovers must be walking.”

In passing these islands, the Pequod enters the Pacific Ocean, which Ishmael apparently has since his youth been longing to encounter. Continuing the Persian motif of the book’s first chapter, Ishmael asserts ” to any meditative Magian that rover, this serene Pacific, once beheld, must ever after be the sea of his adoption.” For Ishmael, the Pacific is the grandest of oceans, “the Indian ocean and Atlantic being but its arms”: it is an ocean that “zones the world’s whole bulk about; makes all coasts one bay to it; seems the tide-beating heart of earth.”

But it is also the ocean in which Ahab expects to find Moby Dick, and the chapter ends with Ahab’s anticipatory “ringing cry”: “Stern all! the White Whale spouts thick blood!”

For the crew of the Pequod, the Pacific will prove to be anything but pacific.

“The Pacific” is read by zoologist Mark Carwardine, whose website banner features this excellent graphic:

The accompanying image, Hurricane XLII, is by Clifford Ross and is © Clifford Ross Studio, all rights reserved. Visit the “Big Reads” site to see a high-resolution version.