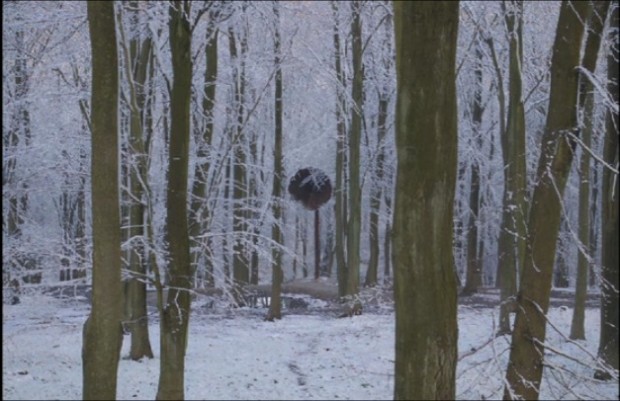 According to Ishmael, the Arsacides (pronounced ar-SASS-i-DEEZ) are a group of islands found to the northeast of Australia, just south of the Solomon Islands. Apparently during one voyage when he was “attached to the trading-ship Dey of Algiers,” Ishmael was invited to spend a few days at Pupella where Tranquo, the king of one of these islands, lived in a “palm villa.” There he discovered among the king’s collections of unusual items the skeleton of a sperm whale that. “after an unusually long raging gale, had been found dead and stranded, with his head against a cocoa-nut tree.” The bones of this whale were “transported up the Pupella glen, where a grand temple of lordly palms now sheltered it.” It was, Ishmael tells us, a “wondrous sight”:

The ribs were hung with trophies; the vertebrae were carved with Arsacidean annals, in strange hieroglyphics; in the skull, the priests kept up an unextinguished aromatic flame, so that the mystic head again sent forth its vapory spout; while, suspended from a bough, the terrific lower jaw vibrated over all the devotees, like the hair-hung sword that so affrighted Damocles.

Ishmael notes the presence of strange hieroglyphic carvings in the whale’s bone, hieroglyphics being one of his particular interests as we’ve seen. Picking up on his musings about fate in “The Mat-Maker,” Ishmael likens the vines on the floor of the forest to a gorgeous carpet, woven by nature with the sun serving as “a flying shuttle.” Ishmael marvels at the strange interweaving of life and death in the bower, as the whale’s skeleton is covered with rich “verdure”: “Life folded Death; Death trellised Life; the grim god wived with youthful Life, and begat him curly-headed glories.”

The whale’s skeleton has become a sacred space for the priests of the island, who object to Ishmael’s attempts to measure its interior but, typical for members of their calling, begin arguing with one another.

My favorite part of this chapter comes at the end, when Ishmael reveals that he, like his buddy Queequeg, is covered with tattoos.

The skeleton dimensions I shall now proceed to set down are copied verbatim from my right arm, where I had them tattooed; as in my wild wanderings at that period, there was no other secure way of preserving such valuable statistics. But as I was crowded for space, and wished the other parts of my body to remain a blank page for a poem I was then composing — at least, what untattooed parts might remain — I did not trouble myself with the odd inches; nor, indeed, should inches at all enter into a congenial admeasurement of the whale.

The idea that the body can serve as a text runs throughout Moby-Dick. We see it in the idea, proposed by the phrenologists and physiognomists to whom Ishmael refers in “A Bosom Friend” and “The Prairie,” that the body (or at least the head) is already legible and can be used to decode character and psychology. We also see it here as a blank slate on which people like Ishmael can write things like poems. And we’ll see it again in Ishmael’s description late in the novel of Queequeg’s body as “a mystical treatise on the art of attaining truth.”

“A Bower in the Arsacides” is read by literary scholar Marina Warner, who teaches at the University of Essex and is the author most recently of the magisterial study Stranger Magic: Charmed States and the Arabian Nights. Marina spent the 2012 January Term with us at NYU Abu Dhabi, teaching an intensive creative writing course “Tales of Love and Death.” Today’s illustration is a video entitled Still by Jem Finer (a still from Still appears above).

[Cross-posted with Patell and Waterman”s History of New York]