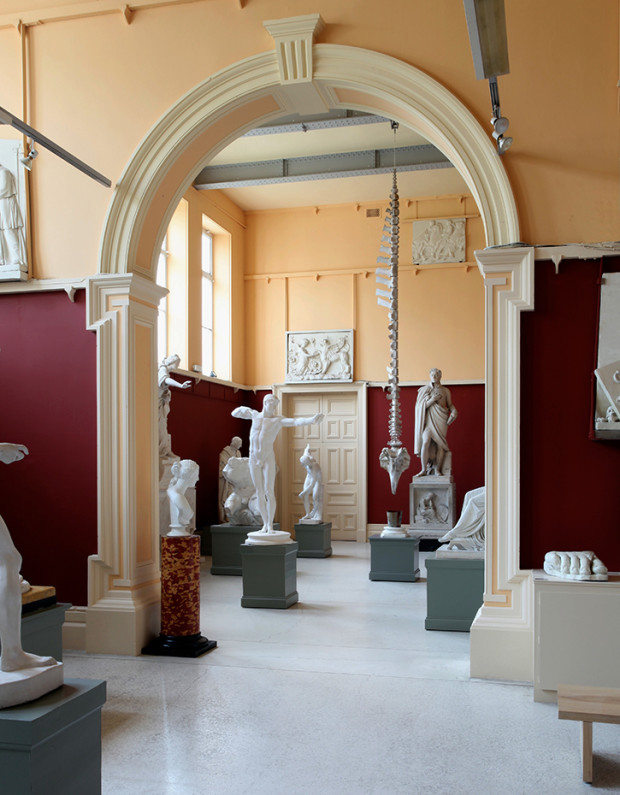 In this chapter, Ishmael provides us with the measurements of the whale’s skeleton that he once saw in the Arsacides, measurements that he had tattooed on his arm so as not to lose track of them. A constant reminder, perhaps, of the seeming physical insignificance of human beings.

Ishmael tells us that he is struck by how little of the sense of the living whale the bones actually provide:

In considering these ribs, I could not but be struck anew with the circumstance, so variously repeated in this book, that the skeleton of the whale is by no means the mould of his invested form. The largest of the Tranque ribs, one of the middle ones, occupied that part of the fish which, in life, is greatest in depth. Now, the greatest depth of the invested body of this particular whale must have been at least sixteen feet; whereas, the corresponding rib measured but little more than eight feet. So that this rib only conveyed half of the true notion of the living magnitude of that part.

I love these moments in which Ishmael is self-conscious about the fact that he is writing a book (not just serving as a narrator). The chapter reiterates what Ishmael asserted earlier in his discussion of “Monstrous Pictures of Whales” — that “the living whale, in his full majesty and significance, is only to be seen at sea in unfathomable waters.” Once again he reminds us here that “only in the heart of quickest perils; only when within the eddyings of his angry flukes; only on the profound unbounded sea, can the fully invested whale be truly and livingly found out.” Should we extend this logic to the book that we are reading? Is Moby-Dick ultimately doomed to failure if its goal is to portray the whale “in his full majesty and significance”?

But Ishmael is not content to end his chapter with the sublime, perhaps because it’s a chapter that deals with empirical observation and ostensibly scientific measurement. He notes that some of the vertebrae of the Arsacidean whale are missing, “lost by some little cannibal urchins, the priest’s children, who had stolen them to play marbles with.” From the sublime to the ridiculous: “Thus we see how that the spine of even the hugest of living things tapers off at last into simple child’s play.”

There’s an allegory of something in that.

By the way, you can get some sense of what it would take to articulate a sperm whale’s skeleton by consulting The Sperm Whale Engineering Manual; or, Building A Big Whale Skeleton, Vol. 2, which I mentioned on Day 80. You can order it here.

“Measurement of the Whale’s Skeleton” is read by British writer Will Eaves, who is the author most recently of the novel This Is Paradise (2012). Today’s illustration is a photograph entitled Whale (2011) is by Irish artist Dorothy Cross. It depicts the Cuvier whale skeleton (height: 7 metres) at the Crawford Art Gallery in Cork, Ireland.