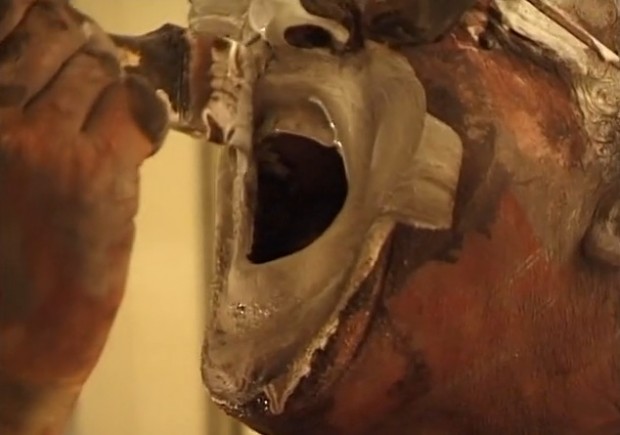 This chapter provides further evidence of Ahab’s superstitious nature and gives the Pequod’s mates an opportunity to think about their surprise shipmate, Fedallah. Ahab has given permission for the crew to capture a right whale because (as Flask reports) Fedallah has proclaimed “that the ship which but once has a Sperm Whale’s head hoisted on her starboard side, and at the same time a Right Whale’s on the larboard . . . can never afterwards capsize?'” Fedallah, Flask reports, “seems to know all about ships’ charms.”

Stubb, however, is unconvinced and, moreover, promises to pitch Fedallah overboard if the opportunity presents itself, because he believes “Fedallah to be the devil in disguise. . . . The reason why you don’t see his tail, is because he tucks it up out of sight.”

Early critics of the novel followed Stubb’s lead, seeing in the relationship of Ahab and Fedallah a retelling of the story of Faust’s corruption by Mephistopheles. F. O. Matthiessen, for example, offers a brief description of Zoroastrian theology, but then argues that Melville rejects them in favor of Christian associations. According to Matthiessen, “you find [Melville] numbering among the sacred associations of whiteness, ‘the white forked flame . . . held the holiest on the altar . . . by the Persian fire-worshippers.’ Yet when he came to treat the relations between Ahab and Fedallah, he was thinking in terms of a Yankee Faust, and the Parsee’s power had therefore to be made diabolic” (American Renaissance, 441).

T. Walter Herbert Melville argues that Melville “indicates that Fedallah is an impostor spirit sent by an evil God to entrap Ahab” (Calvinism, 144). Herbert fits Fedallah into his description of the novel’s Calvinist framework by stressing Stubb’s description of Fedallah as “the devil in disguise,” without acknowledging the joking tone that suggests that the novel may not share Stubb’s perspective. He reads Ishmael’s description of Fedallah’s relationship to Ahab—”he soon evinced himself to be linked with Ahab’s peculiar fortunes; nay, so far as to have some sort of a half-hinted influence; Heaven knows, but it might have been even authority over him”—as a confirmation of Stubb’s belief, quoting but not emphasizing Ishmael’s prefatory statement that “Fedallah remained a muffled mystery to the last” (“Cosmic Evil,” 1617).

Neither  Matthiessen nor Herbert seem to consider the possibility that what we are seeing is a view of Fedallah presented by sailors—including Ishmael—who are steeped in the Christian tradition and therefore inclined to view with suspicion someone who looks like Fedallah: “tall and swart,” dressed in black, with “a glistening white plaited turban, the living hair braided and coiled round and round upon his head” “strangely crowning his ebonness” (as Ishmael describes him in “The First Lowering“).

WE, however, will consider alternative readings of the character — all in good time.
“Stubb and Flask Kill a Right Whale” is read by Susan Steinberg and illustrated with a both a still photo and a video by Stuart Brisley. The still photo (by Leslie Haslam) is part of the Tate Collection and comes from the project  Moments of Decision/Indecision (1975), which Brisley describes on his website in this way:

I was offered a DAAD fellowship to live and work in West Berlin for a year in 1973/74.

The first thing I did was to go to Warsaw where I met Józef Szajna, the Director of Teatra Studio.

I was offered an opportunity to make a work at the studio in 1975.

It was subsequently titled Moments of Decision/ Indecision.

The work was situated in a large room half of which I designated for the performance which took place over six days.

I attempted to climb up the wall at the end of the room without aid. The floor was covered in black and white paint in liberal quantities.  This impossible task produced a number of actions .

I was naked with shaven head. In the attempts to climb the wall I became covered in paint and lost my sight on each of the six days.  At this point the photographer who came with me from West Berlin acted as my guide. Telling where I was in relation to the wall.  The title refers to this situation where the photographer made decisions both through the camera and in becoming my sight guide. I was the photographed subject moving at will but unable to see hence the term indecision.  There are a number of ways to interpret what happened given the sharp context of the work and the fundamentally  separate ideological conditions between East and West at the time..

Some of the resulting photographic images have become art works in their own right.

The video, which seems to reimagine the earlier project, is called Black Red White, 1997-2009. A still is shown above; visit the “Big Reads” site to watch the video.