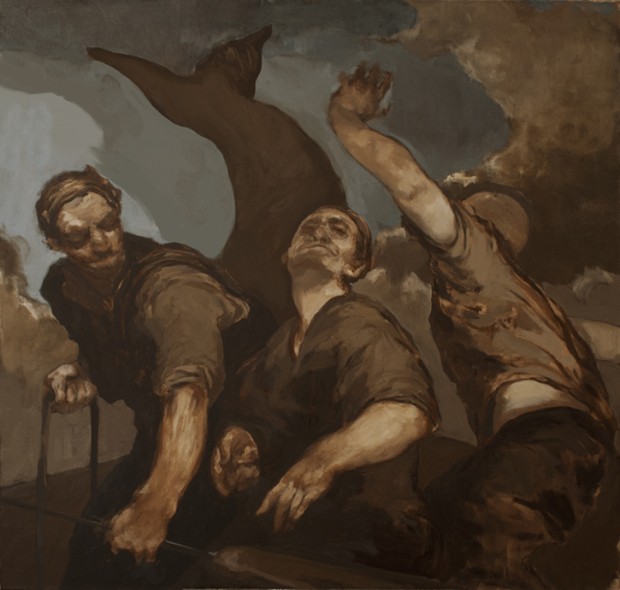 “The First Lowering” is a long chapter: Tom Brown’s evocative reading lasts 25.41 and vividly captures the frenetic action that accompanies the first chase after a whale.

The “dusky phantoms” who appeared at the end of the last chapter turn out to be Ahab’s personal boat crew, “smuggled on board, somehow, before the ship sailed.” The Pequod‘s mates and sailors are startled. Ahab was not expected to lead a whaleboat himself on this voyage and his “boat had always been deemed one of the spare boats, though technically called the captain’s, on account of its hanging from the starboard quarter.” Ahab’s crew is led by the harpooneer Fedallah, who is described in this way:

The figure that now stood by its bows was tall and swart, with one white tooth evilly protruding from its steel-like lips. A rumpled Chinese jacket of black cotton funereally invested him, with wide black trowsers of the same dark stuff. But strangely crowning his ebonness was a glistening white plaited turban, the living hair braided and coiled round and round upon his head. Less swart in aspect, the companions of this figure were of that vivid, tiger-yellow complexion peculiar to some of the aboriginal natives of the Manillas; — a race notorious for a certain diabolism of subtilty, and by some honest white mariners supposed to be the paid spies and secret confidential agents on the water of the devil, their lord, whose counting-room they suppose to be elsewhere.

Ishmael’s description immediately establishes a connection between Fedallah and the devil that has dominated commentary on Fedallah by Moby-Dick scholars. I’ll have more to say about that critical commonplace in the days to come.

As the chapter progresses, we focus at intervals on each of the four boats led by the captain and his three mates, as Ishmael’s prose struggles to capture the intensity of whale-hunting:

Not the raw recruit, marching from the bosom of his wife into the fever heat of his first battle; not the dead man’s ghost encountering the first unknown phantom in the other world; — neither of these can feel stranger and stronger emotions than that man does, who for the first time finds himself pulling into the charmed, churned circle of the hunted Sperm Whale.

It’s his first time in a whaleboat, and let’s just say that it’s eventful. Remember those cenotaphs in “The Chapel“? Ishmael comes close to needing one of his own.

“The First Lowering” is read by Tom Brown. The illustration, The Sighting (2012), is by Tom Wilson