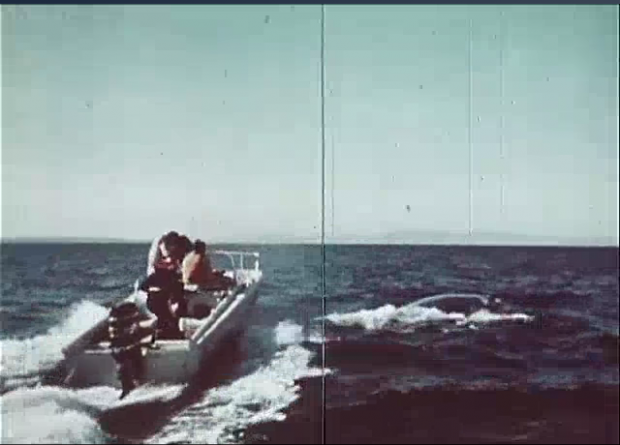 “The Sphinx” is another chapter in which Ishmael gives us information that causes us to retrace our steps through the previous chapters and reimagine things. Ishmael reveals that before the whale’s body is stripped of its blubber, the whale has been beheaded and the head has been hung from the side of the ship. Ahab addresses a soliloquy to the head, an apostrophe in which he contemplates the mysteries that the whale’s eyes have seen. If only the head could speak!

In calling the chapter “The Sphinx,” Ishmael not only continues the Egyptian motif of the previous chapter, but also likens Ahab to the ancient Greek tragic hero Oedipus, who came to rule Thebes by solving the riddle of the sphinx. But unlike Oedipus, Ahab cannot solve the riddles that are embodied by the whale’s head. Ahab is interrupted when a ship is sighted “three points on the starboard bow,” and he ends his monologue with what strikes me as an intertextual reference to Emerson’s Nature. I said two days ago, that Ishmael seems to disagree with Emerson’s idea that “every man’s condition is a solution in hieroglyphic to those inquiries he would put.” Here, however, Ahab seems to engage in precisely the kind of analogical thinking in which Emerson delighted. Ahab exclaims:

O Nature, and O soul of man! how far beyond all utterance are your linked analogies! not the smallest atom stirs or lives on matter, but has its cunning duplicate in mind.

Compare that to the dicta with which Emerson begins the “Language” chapter ofNature:

1. Words are signs of natural facts.

3. Nature is the symbol of spirit.

This spring, when we think about Melville and Emerson (as I suspect we might) during our course on Moby-Dick, these chapters concerning the aftermath of the Pequod‘s first hunt may provide a good place to start.

“The Sphinx” is read by the artist Dorothy Cross. The reading is illustrated with a video entitled Description of a Struggle (2012) by Jessica Sarah Rinland, which splices together vintage footage (mid-twentieth-century) related to whaling. The title comes from a long story by Franz Kafka, which provides the epigraph for the video. Visit the “Big Read” site to watch it. Rinland’s most recent project is a documentary short entitled Electric Oil (2012) in which a patient realizes that her disease was caused by events that took place aboard her father’s whaling ship when she was six-years-old.