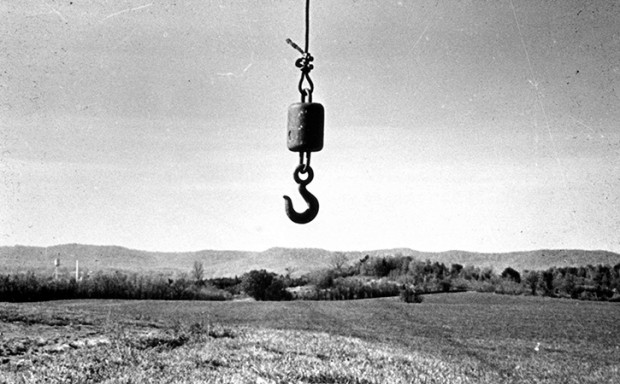 The whale that Stubb killed didn’t start out white but it ends up that way: Ishmael reports that “the peeled white body of the beheaded whale flashes like a marble sepulchre.” As it floats off into the distance, the whale’s carcass attracts sharks and vultures. In “Brit,” Ishmael asked us to consider ” the universal cannibalism of the sea”; here, he asks us to consider the “horrible vultureism of earth! from which not the mightiest whale is free.” Nature in Moby-Dick is indeed savage, the “warre of every one against every one,” as Thomas Hobbes put it, explaining why men choose to enter into a social contract that leads to civilization but also submission to the state, which Hobbes calls the “leviathan.”

But once again Ishmael uses an aspect of whaling practice as the pretext for a meditation on something else. In this case, it’s the tyranny of “orthodoxy.” Sometimes, it seems, a ship, seeing a whale’s carcass from afar, will mistake it for a rocky shoal and note it that way on a chart; ever after, ships will avoid the place. Ishmael exclaims: “There’s your law of precedents; there’s your utility of traditions; there’s the story of your obstinate survival of old beliefs never bottomed on the earth, and now not even hovering in the air! There’s orthodoxy!”

Orthodoxy becomes the ghost that haunts men, harder to expose as a fraud than the famous Cock Lane Ghost of the previous century.

“The Funeral” is read by poet Brian Patten. The illustration is “The only known photograph of God” by Thomas Merton (used with Permission of the Merton Legacy Trust and the Thomas Merton Center at Bellarmine University). I wonder: are the curators suggesting that the photo tells us something about orthodoxy and its discontents?