There’s always another way of looking at things: “If to Starbuck the apparition of the Squid was a thing of portents, to Queequeg it was quite a different object. ‘When you see him ‘quid’, said the savage, honing his harpoon in the bow of his hoisted boat, ‘then you quick see him ‘parm whale.'” Although the rocking of the waves is threatening to lull the Pequod to sleep, suddenly in the ship’s lee Ishmael and the other two lookouts spy ” a gigantic Sperm Whale,” which “lay rolling in the water like the capsized hull of a frigate, his broad, glossy back, of an Ethiopian hue, glistening in the sun’s rays like a mirror. But lazily undulating in the trough of the sea, and ever and anon tranquilly spouting his vapory jet, the whale looked like a portly burgher smoking his pipe of a warm afternoon.” Ishmael’s choice of adjectives to describe the color of the whale — Ethiopian — once again links the whale to the discourse of race (which we saw earlier in the “Moby Dick” chapter).

We see the line that Ishmael described in the previous chapter hurled into action and witness its deadly power. Having lit his pipe (thereby making himself a foil for the whale), Stubb harpoons the whale-burgher and his boat is towed in what sailors referred to as a “Nantucket sleigh ride.”

Those of you who are interested in seeing a real-live Nantucket sleigh ride should have a look at the 1922 film Down to the Sea in Ships, a fictional narrative that makes use of documentary footage from an actual whaling voyage. The title cards include quotations from Moby-Dick. (Click here to read the Wikipedia entry.) 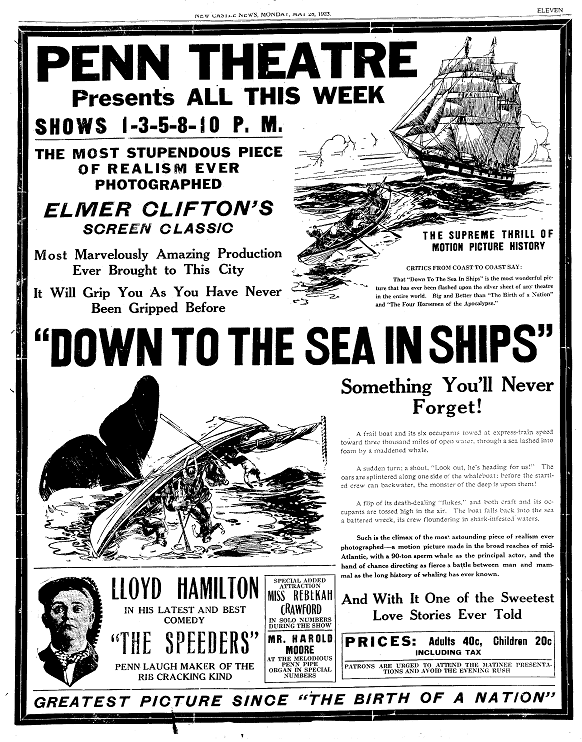 “Stubb Kills a Whale” contains some of the most gruesome imagery in the novel, as the mate uses his harpoon to stab the whale to death. In a bit of comic business that doesn’t provide relief as much as grotesque counterpoint, the whale’s “pipe” goes out at the same time that Stubb’s does. The chapter reminds us that what whaling involves is the brutal transformation of a majestic living creature into commodities for use by human beings. We’ll explore this idea further as the novel progresses.

For today’s audio presentation, which lasts 17 minutes, Ishmael’s narrative is presented in a stately (or is it drowsy?) cadence by the performance artist Marcia Farquhar. The chapter’s dialogue is read by the composer Jem Finer. Today’s illustration is entitled Fluke (2012) by the artist Mat Chivers.