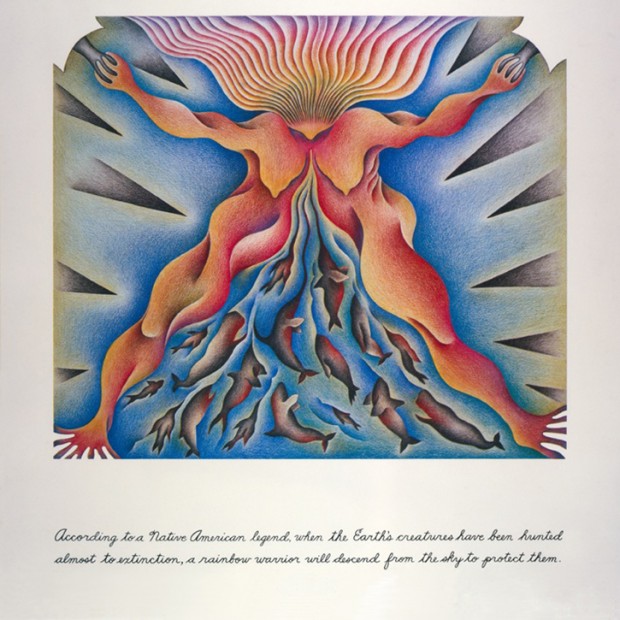 When I’m teaching Moby-Dick, I will often ask my students this question: “What color is the white whale … really?” The question usually throws them for the loop, but the answer can be found in this chapter.

As the chapter opens, Ishmael reasserts his narrative voice; the dramatic interlude is over:

I, Ishmael, was one of that crew; my shouts had gone up with the rest; my oath had been welded with theirs; and stronger I shouted, and more did I hammer and clinch my oath, because of the dread in my soul. A wild, mystical, sympathetical feeling was in me; Ahab’s quenchless feud seemed mine. With greedy ears I learned the history of that murderous monster against whom I and all the others had taken our oaths of violence and revenge.

It’s one of those moments in the novel when Ishmael forces us to rethink what’s gone before in the light of new information. We now need to imagine Ishmael drinking the grog and swearing death to Moby Dick.

As if suddenly getting hold himself, however, Ishmael now proceeds to analyze the factors that have led to the spread of “the outblown rumors of the White Whale,” which “did in the end incorporate with themselves all manner of morbid hints, and half-formed foetal suggestions of supernatural agencies” and “which eventually invested Moby Dick with new terrors unborrowed from anything that visibly appears.” These factors include the natural superstitiousness of sailor; the even greater superstitiousness of whalers; the acknowledged fierceness of sperm whales; and the belief that Moby Dick was somehow “ubiquitous” and possibly even “immortal.”

And then Ishmael gets to the description, noting that what distinguished Moby Dick from other sperm whales was “a peculiar snow-white wrinkled forehead, and a high, pyramidical white hump. These were his prominent features; the tokens whereby, even in the limitless, uncharted seas, he revealed his identity, at a long distance, to those who knew him.”

In other words, movies and paintings that depict Moby Dick as a completely white whale aren’t accurately representing what Ishmael describes:

The rest of his body was so streaked, and spotted, and marbled with the same shrouded hue, that, in the end, he had gained his distinctive appellation of the White Whale; a name, indeed, literally justified by his vivid aspect, when seen gliding at high noon through a dark blue sea, leaving a milky-way wake of creamy foam, all spangled with golden gleamings.

This description of Moby Dick is a fitting emblem for the dynamic that Toni Morrison describes in Playing in the Dark as the fundamental dynamic of American literature: she asks whether “the major and championed characteristics of our national literature–individualism, masculinity, social engagement versus historical isolation; acute and ambiguous moral problematics; the thematics of innocence coupled with an obsession with figurations of death and hell–are not in fact responses to a dark, abiding, signing Africanist presence.” And in her essay “Unspeakable Things Unspoken: The Afro-American Presence in American Literature” (1988) , Morrison reads Moby-Dick as an allegory of American thinking about race, in which Ahab emerges as the only white male American heroic enough to try to slay the monster that was devouring the world as he knew it.” She argues that what motivates Melville in Moby-Dick is “his recognition of the moment in America when whiteness became ideology. And if the white whale is the ideology of race, what Ahab has lost to it is personal dismemberment and family and society and his own place as a human in the world.”

I find Morrison’s reading intriguing, though I think she goes too far. I do, however, suggest to my students that Melville cannot have been making use of this imagery of black and white in 1850 in the United States of America without having the problems of race relations and slavery somewhere in the back of his mind. The year 1850, after all, is the year of the passage of the infamous “Compromise of 1850″ and the federal ” Fugitive Slave Law ” that galvanized anti-slavery activity in New England and even led Ralph Waldo Emerson, generally so concerned to limit his discourse to abstract questions, to speak out against the law.

And these were not just abstract questions for Melville: his father-in-law, Lemuel Shaw, was the chief justice of Massachusetts and, despite his personal abolitionist beliefs, presided over the case that resulted in Thomas Sims being returned to his owners in Georgia aboard a US warship accompanied by Federal marshals. The Sims case was notorious throughout New England; even if Melville were not Shaw’s son-in-law, he could hardly have avoided hearing about it.

But it seems that Melville did take an active interest in his father-in-law’s cases. The idea of “monomania” was at issue in another of Shaw’s cases, Commonwealth v. Rogers, in which it was cited in support of an unsuccessful insanity defense. Ishmael uses the term monomania here in this chapter to describe Ahab’s obsession with the whale, in another of my favorite passages:

all evil, to crazy Ahab, were visibly personified, and made practically assailable in Moby Dick. He piled upon the whale’s white hump the sum of all the general rage and hate felt by his whole race from Adam down; and then, as if his chest had been a mortar, he burst his hot heart’s shell upon it. …  [C]ertain it is, that with the mad secret of his unabated rage bolted up and keyed in him, Ahab had purposely sailed upon the present voyage with the one only and all-engrossing object of hunting the White Whale.

Or, rather, the white-and-black whale.