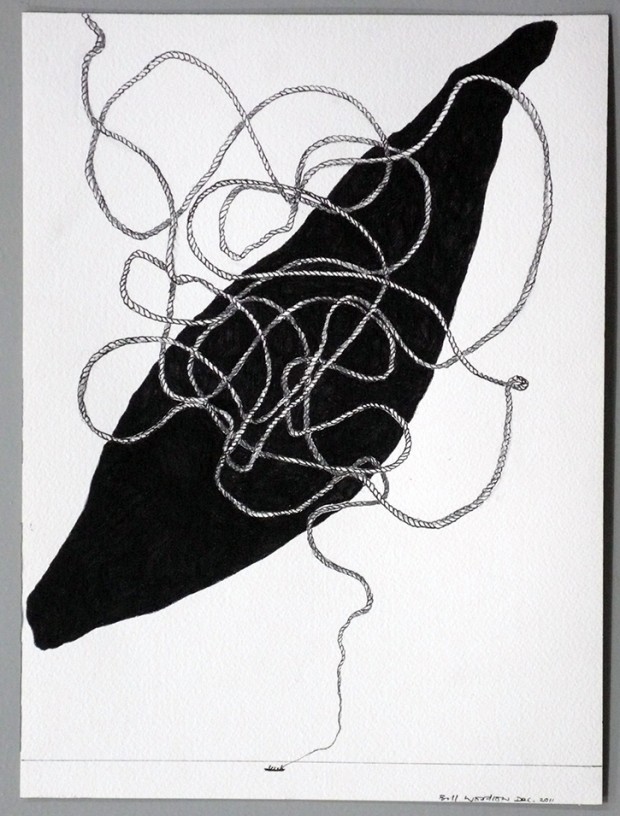 “The Line” is a paradigmatic example of the narrative method of Moby-Dick, in which the seemingly encyclopedic chapters about the methods of whaling serve not only to convey knowledge about whaling, but also  to elaborate the thematic and symbolic patterns of the novel — and, as we’ll find out eventually, present what will turn out to be facts relevant to the unfolding of the novel’s plot. Like many things having to do with whaling (and, Ishmael suggests, with life), the whale line is both “magical” and “sometimes horrible.”

To understand the intricacies of Ishmael’s description, it helps to have a picture in your head: 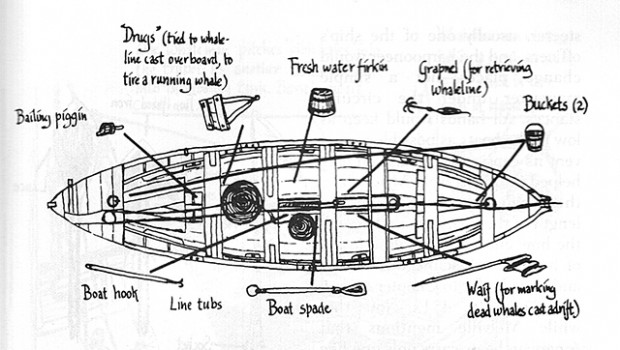 The illustration (from John B. Putnam’s essay “Whaling and Whalecraft: A Pictorial Account, in the Norton Critical Edition

of Moby-Dick) helps to understand why Ishmael says, “Thus the whale-line folds the whole boat in its complicated coils, twisting and writhing around it in almost every direction.” The chapter should put us mind of those men memorialized on the cenotaphs described in “The Chapel“: “Sacred To the Memory of ROBERT LONG, WILLIS ELLERY, NATHAN COLEMAN, WALTER CANNY, SETH MACY, AND SAMUEL GLEIG, Forming one of the boats’ crews of the Ship Eliza Who were towed out of sight by a Whale, On the Off-shore Ground in the Pacific, December 31st, 1839.” When the harpoon is thrown, you need to be careful last it snag on your person and pull you out of the boat: 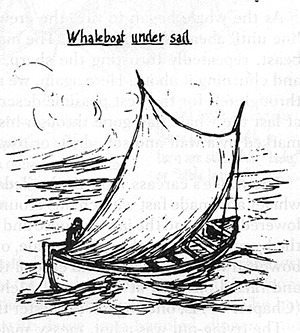 For, when the line is darting out, to be seated then in the boat, is like being seated in the midst of the manifold whizzings of a steam-engine in full play, when every flying beam, and shaft, and wheel, is grazing you. It is worse; for you cannot sit motionless in the heart of these perils, because the boat is rocking like a cradle, and you are pitched one way and the other, without the slightest warning; and only by a certain self-adjusting buoyancy and simultaneousness of volition and action, can you escape being made a Mazeppa of, and run away with where the all-seeing sun himself could never pierce you out.

What’s amazing is that the whalers get used to it and even approach their task with a sort of grim comedy. And suddenly Ishmael is taking us from material observations to philosophical abstractions, musing that “all men live enveloped in whale lines.” Ishmael adopts the kind of jolly fatalism we’ve seen in Stubb: “All are born with halters round their necks; but it is only when caught in the swift, sudden turn of death, that mortals realize the silent, subtle, ever-present perils of life.”

In other words, taking a “philosophical” approach can help you to undertake the daunting task of getting into a whaleboat and chasing after a creature as large as a sperm whale. Because if it’s your time to go, you’ll go whether you’re in a whaleboat or sitting at home.

Ishmael tries to convince us that “if you be a philosopher, though seated in the whale-boat, you would not at heart feel one whit more of terror, than though seated before your evening fire with a poker, and not a harpoon, by your side.”

But is this philosophizing? Or just rationalizing? Isn’t it ridiculous to think that you’re just as safe at home as you are in a whaleboat being towed by an enraged harpooned whale?How trusting in fate should we really be? Isn’t this just the kind of thing that a half-crazed whaleman would tell himself in order to get himself to do something that no one in his right mind would actually want to do.

This passage has always reminded me of Jonathan Edwards’s sermon “Sinners in the Hands of an Angry God” (1741) a paean to God’s power:

O sinner! Consider the fearful danger you are in: it is a great furnace of wrath, a wide and bottomless pit, full of the fire of wrath, that you are held over in the hand of that God, whose wrath is provoked and incensed as much against you, as against many of the damned in hell. You hang by a slender thread, with the flames of divine wrath flashing about it, and ready every moment to singe it, and burn it asunder; and you have no interest in any Mediator, and nothing to lay hold of to save yourself, nothing to keep off the flames of wrath, nothing of your own, nothing that you ever have done, nothing that you can do, to induce God to spare you one moment.

In the view of Edwards and the Calvinists who came before him, all human beings are sinners, no deserves to be saved, and yet people are saved because God is merciful. The virtuous person who has faith in God has no reason to fear what is predestined. That slender thread is strong enough so long as you are linked to the hand of God.

But what happens when you still believe, like Ahab, in predestination, but you’re no longer sure about a merciful God? What happens if the slender and the flames of wrath belong not to god but only to the White Whale? Isn’t getting into that boat suicide by other means? Remember what Ishmael says in the opening chapter:

Whenever I find myself growing grim about the mouth; whenever it is a damp, drizzly November in my soul; whenever I find myself involuntarily pausing before coffin warehouses, and bringing up the rear of every funeral I meet; and especially whenever my hypos get such an upper hand of me, that it requires a strong moral principle to prevent me from deliberately stepping into the street, and methodically knocking people’s hats off — then, I account it high time to get to sea as soon as I can. This is my substitute for pistol and ball. With a philosophical flourish Cato throws himself upon his sword; I quietly take to the ship. There is nothing surprising in this. If they but knew it, almost all men in their degree, some time or other, cherish very nearly the same feelings towards the ocean with me.

“The Line” is read by Adam Low and illustrated with a pen-and-ink drawing by Bill Woodrow.