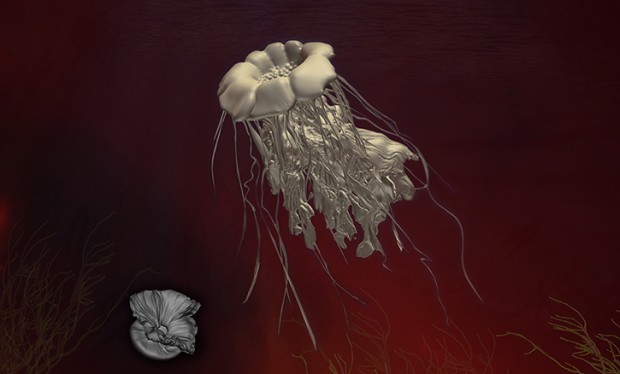 Here Ishmael recounts the story of a false alarm, in which Daggoo spies a white mass ahead of the ship and yells, “There! there again! there she breaches! right ahead! The White Whale, the White Whale!” Ahab instantly orders the boats lowered, but it turns out not to be a whale at all. Indeed, it turns out to be something much more rarely seen:

Almost forgetting for the moment all thoughts of Moby Dick, we now gazed at the most wondrous phenomenon which the secret seas have hitherto revealed to mankind. A vast pulpy mass, furlongs in length and breadth, of a glancing cream-color, lay floating on the water, innumerable long arms radiating from its centre, and curling and twisting like a nest of anacondas, as if blindly to clutch at any hapless object within reach. No perceptible face or front did it have; no conceivable token of either sensation or instinct; but undulated there on the billows, an unearthly, formless, chance-like apparition of life.

It is a giant squid, and the superstitious Starbuck takes it to be an ominous encounter: “Almost rather had I seen Moby Dick and fought him, than to have seen thee, thou white ghost!” Ishmael ends the chapter with an ominous Biblical reference, disparaging the idea suggested by naturalists that this giant creature is related to the ordinary cuttle-fish with whom it is classed by naturalists. In calling the squid “the Anak” of his tribe, Ishmael indicates by how much the giant squid dwarfs the cuttle-fish, invoking this from the Book of Numbers: “And there we saw the giants, the sons of Anak, which come of the giants: and we were in our own sight as grasshoppers, and so were we in their sight.”

As in “Cetology,” Ishmael is once again disparaging the kind of knowledge that naturalists offer with their zeal for classification. And he’s also suggesting just how perilous it is to be an ordinary human afloat on a wooden boat amidst the wonders and terrors of the ocean.

Appropriately enough, “Squid” is read by fantasy fiction author China Miéville,  who blogs at chinamieville.net. It is illustrated by Melanie Jackson‘s piece Towards A New Working Class: The Glaucous Aquatic Gleam (2012; digitally), which is part of The Urpflanze (Part 2).

The “Big Read” is asking its listeners to donate to the Whale and Dolphin Conservation Fund. Click herefor more information.