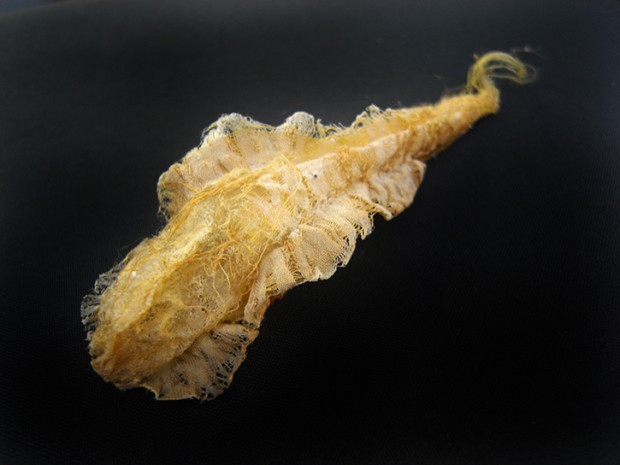 Ishmael begins this chapter by detailing the careful preparations that Ahab has made to ensure that he can command his own whale-boat. He has smuggled aboard his own boat crew and fitted out the bow of his whale-boat to accommodate his prosthetic leg. The appearance of the shadowy crew is a shock, but the shock doesn’t last for long, for (as Ishmael notes)

in a whaler wonders soon wane … such unaccountable odds and ends of strange nations come up from the unknown nooks and ash-holes of the earth to man these floating outlaws of whalers; and the ships themselves often pick up such queer castaway creatures found tossing about the open sea on planks, bits of wreck, oars, whale-boats, canoes, blown-off Japanese junks, and what not; that Beelzebub himself might climb up the side and step down into the cabin to chat with the captain, and it would not create any unsubduable excitement in the forecastle.

An exception to the rule, however, seems to be Fedallah, Ahab’s harpooneer:

But one cannot sustain an indifferent air concerning Fedallah. He was such a creature as civilized, domestic people in the temperate zone only see in their dreams, and that but dimly; but the like of whom now and then glide among the unchanging Asiatic communities, especially the Oriental isles to the east of the continent — those insulated, immemorial, unalterable countries, which even in these modern days still preserve much of the ghostly aboriginalness of earth’s primal generations, when the memory of the first man was a distinct recollection, and all men his descendants, unknowing whence he came, eyed each other as real phantoms, and asked of the sun and the moon why they were created and to what end; when though, according to genesis, the angels indeed consorted with the daughters of men, the devils also, add the uncanonical Rabbins, indulged in mundane amours.

Early critics of the novel followed Ishmael’s lead in associating Fedallah with the devil, seeing in the relationship of Ahab and Fedallah a retelling of the story of Faust’s corruption by Mephistopheles. For example, T. Walter Herbert argues that Melville “indicates that Fedallah is an impostor spirit sent by an evil God to entrap Ahab” (Moby-Dick and Calvinism, p. 144).

Critics who follow this line of thought never seem to consider the possibility that what we are seeing is a view of Fedallah presented by sailors—including Ishmael—who are steeped in the Christian tradition and therefore inclined to view with suspicion someone who looks like Fedallah: “tall and swart,” dressed in black, with “a glistening white plaited turban, the living hair braided and coiled round and round upon his head” “strangely crowning his ebonness” (as Ishmael puts it in “The First Lowering“).

Fedallah is more than simply a Mephistophelean figure, and we’ll be talking about him more as the novel progreses. For now, however, we might wonder why Ishmael, so quick to befriend Queequeg the cannibal, finds himself unable to extend the same kind of sympathetic identification to Fedallah. Ishmael is curious to learn about Queequeg’s history, but Fedallah he is content to relegate to the mists of myth.

“Ahab’s Boat and Crew. Fedallah” is read by Columbia University professor Andrew Delbanco, who is the author of the biography Melville: His World and His Work. The illustration, Untitled (2012), is by Paul Hazelton.