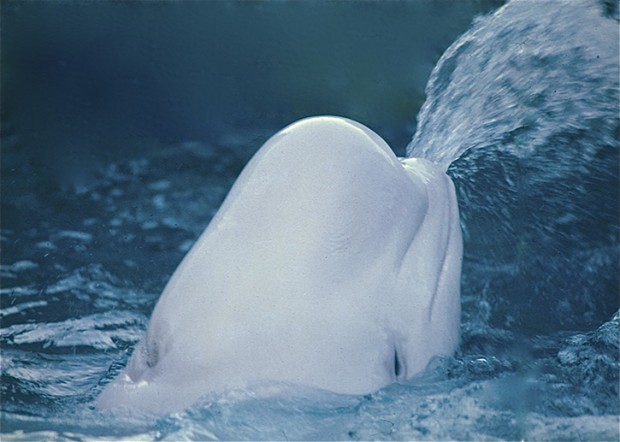 “The Spirit-Spout” opens some time after the events of the Pequod‘s first lowering. Ishmael tells us:

Days, weeks passed, and under easy sail, the ivory Pequod had slowly swept across four several cruising-grounds; that off the Azores; off the Cape de Verdes; on the Plate (so called), being off the mouth of the Rio de la Plata; and the Carrol Ground, an unstaked, watery locality, southerly from St. Helena.

The ship is now in the South Atlantic off the coast of Africa: 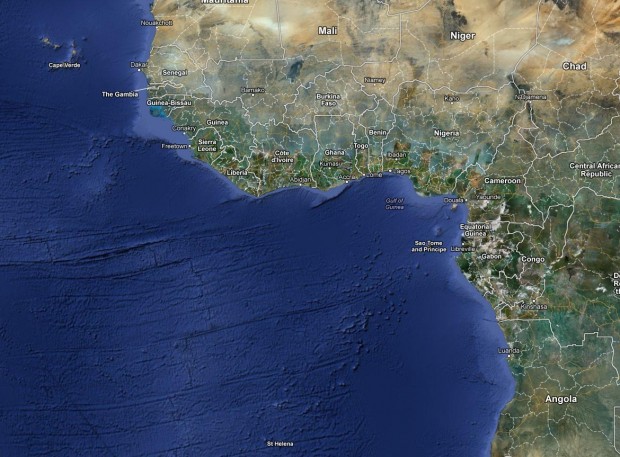 Ishmael describes the seas here as “wearily, lonesomely mild” as if “all space, in repugnance to our vengeful errand, seemed vacating itself of life before our urn-like prow.” “The Spirit-Spout” is an eerie chapter, full of portents, as Fedallah spies a ghostly spout, “a silvery jet … lit up by the moon” in the dead of night. Appearing intermittently, the spout seems to be leading the ship on, and the sailors come to believe that the spout belongs to none other than Moby Dick:

For a time, there reigned, too, a sense of peculiar dread at this flitting apparition, as if it were treacherously beckoning us on and on, in order that the monster might turn round upon us, and rend us at last in the remotest and most savage seas.

And then the Pequod continues its journey east — around the tip of Africa — and the calm seas are no more. “The Cape winds began howling around us,” Ishmael writes, and the emptiness is replaced by “dismal sights”: “strange forms in the water darted hither and thither before us; while thick in our rear flew the inscrutable sea-ravens.” And still the white spout leads them on.

Ishmael offers us two arresting images of Ahab in this chapter. The first is Ahab walking on the deck: “While his one live leg made lively echoes along the deck, every stroke of his dead limb sounded like a coffin-tap. On life and death this old man walked.” The second shows us Ahab alone in his cabin (yet another scene that Ishmael cannot witnessed himself):

with closed eyes sitting straight in his floor-screwed chair; the rain and half-melted sleet of the storm from which he had some time before emerged, still slowly dripping from the unremoved hat and coat. On the table beside him lay unrolled one of those charts of tides and currents which have previously been spoken of. His lantern swung from his tightly clenched hand. Though the body was erect, the head was thrown back so that the closed eyes were pointed towards the needle of the tell-tale that swung from a beam in the ceiling.

Starbuck, who happens upon Ahab in this pose one night while checking the ship’s barometer, thinks to himself, “Terrible old man! … sleeping in this gale, still thou steadfastly eyest thy purpose.”

Sophia Hawthorne, the writer’s wife, must have asked Melville whether the chapter was meant to be read allegorically, because he writes to her in a letter (8 January 1852):

At any rate, your allusion for example to the “Spirit Spout” first showed to me that there was a subtile significance in that thing — but I did not, in that case, mean it. I had some vague idea while writing it, that the whole book was susceptible of an allegoric construction, & also that parts of it were — but the speciality of many of the particular subordinate allegories, were first revealed to me, after reading Mr. Hawthorne’s letter, which without citing any particular examples, yet intimated the part & parcel allegoricalness of the whole. (Reprinted in the Norton Critical Edition

Melville’s letter is useful to readers like me who believe that the “meaning” of a literary text is not simply put into it by the author, but instead results from a negotiation between author and reader through the medium of the text. Though my colleagues in the sciences tend to find it hard to believe, the author’s intention contributes to — but does not fully control — literary meaning.

“The Spirit-Spout”is read with deliberate cadence and appropriatelty eerie musical accompaniment by Alexis Kirke, who is is composer-in-residence for the Plymouth Marine Institute. Among his recent compositions is Fast Travel, a 10- minute piece for saxophone and artificially intelligent whale schools, co-composed with Sam Freeman. The pair also combined on Soundwave, a 12-minute piece for large-scale wave tank, water drummers and electronics, which was commissioned by the Plymouth Marine Institute for the opening of their new building at Plymouth University.  Soundwave premiered on October 30, 2012 with Kirke playing wave-tank accompanied by  water drummers Josie Boucharde, Philip J. Kendall, Magdalena Walker and Jennie Pinhey.