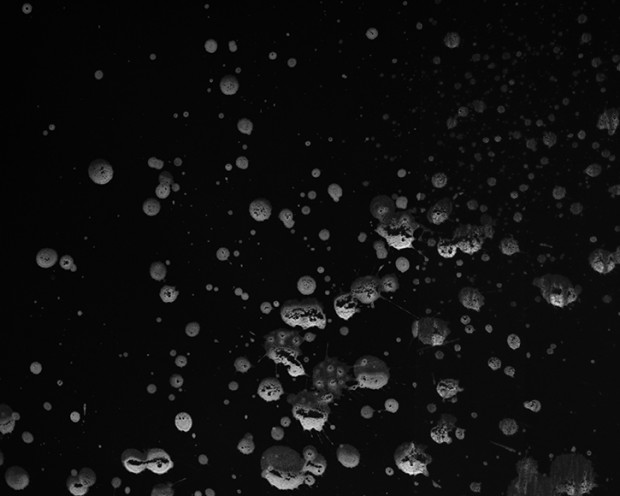 It is in this chapter — “The Quarter-Deck” — that Moby-Dick really kicks into gear. Ishmael signals that something out of the ordinary is about to happen when he includes a stage direction — “(Enter Ahab: Then, all.)” — below the chapter title.

In fact what we are about to see is a mixture of pageant and ritual, written and directed by Ahab, which is designed to manufacture ideological agreement among the members of his crew. It’s a superb of what the cultural critic Sacvan Bercovitch calls a “ritual of consensus.”

Ahab takes the unusual step of assembling the entire crew of the Pequod above deck at the same time in order to reveal the true purpose behind their voyage. Usually, aboard a whaling ship, the crew rotates according to “watches,” so that some sailors are sleeping while others are working. And ordinary sailors are generally never assembled on the quarter-deck at the stern of the ship, which is an area reserved for the captain and the mates. Remember what Ishmael has told us in the “Loomings” chapter: “No, when I go to sea, I go as a simple sailor, right before the mast, plumb down into the forecastle, aloft there to the royal mast-head.” To assemble the entire crew at once and on the quarter-deck no less means that something mighty extraordinary is afoot. 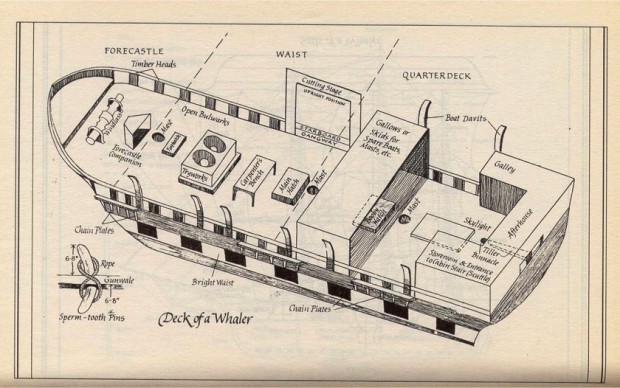 (Illustration from the first edition of the Norton Critical Edition

Once he has the crew assembled, Ahab nails a golden doubloon to the mast and declares, “Whosoeer of ye raises me a white-headed whale with a wrinkled brow and a crooked jaw; whosoever of ye raises me that white-headed whale, with three holes punctured in his starboard fluke—look, ye, whosoever of ye raises me that same white whale, he shall have this gold ounce, my boys!” This Ecuadorian “gold ounce” was worth sixteen Spanish silver dollars, a hefty sum for an ordinary seaman. In offering this incentive to keep a close lookout for a particular white whale, Ahab seems to be appealing to the economic motives that have led the sailors to go a-whaling. But as the scene progresses, Ahab shifts the ground from economy to something elese.

One of the harpooneers, Tashtego, asks whether “that white whale must be the same that some call Moby Dick.” Queequeg and Daggoo, the other harpooneers, are familiar with him as well. And so is the first mate:

“Captain Ahab,” said Starbuck, who, with Stubb and Flask, had thus far been eyeing his superior with increasing surprise, but at last seemed struck with a thought which somewhat explained all the wonder. “Captain Ahab, I have heard of Moby Dick — but it was not Moby Dick that took off thy leg?”

What follows is one of my favorite paragraphs in the novel, just from the standpoint of syntax and diction:

“Who told thee that?” cried Ahab; then pausing, “Aye, Starbuck; aye, my hearties all round; it was Moby Dick that dismasted me; Moby Dick that brought me to this dead stump I stand on now. Aye, aye,” he shouted with a terrific, loud, animal sob, like that of a heart-stricken moose; “Aye, aye! it was that accursed white whale that razeed me; made a poor pegging lubber of me for ever and a day!” Then tossing both arms, with measureless imprecations he shouted out: “Aye, aye! and I”ll chase him round Good Hope, and round the horn, and round the Norway maelstrom, and round perdition’s flames before I give him up. And this is what ye have shipped for, men! to chase that white whale on both sides of land, and over all sides of earth, till he spouts black blood and rolls fin out. What say ye, men, will ye splice hands on it, now? I think ye do look brave.”

This paragraph, by the way, serves as the basis for one of the iconic moments in Star Trek II: The Wrath of Khan, a film that is rife with references to Moby-Dick.

Ahab’s speech has an immediate effect on the harpooneers and seamen, who excitedly run “closer to the old man.” Ahab calls for some liquor — some grog — to be brought from below.

But Starbuck is having none of it: “I am game for his crooked jaw, and for the jaws of Death too, Captain Ahab, if it fairly comes in the way of the business we follow; but I came here to hunt whales, not my commander’s vengeance. How many barrels will thy vengeance yield thee even if thou gettest it, Captain Ahab? it will not fetch thee much in our Nantucket market.”

Starbuck is reminding Ahab that the crew of the Pequod has been contracted by the ship’s owners to hunt whales for profit. Ahab’s response sounds positively Emersonian in its scorn for the logic of the marketplace:

”Nantucket market! Hoot! But come closer, Starbuck; thou requirest a little lower layer. If money”s to be the measurer, man, and the accountants have computed their great counting-house the globe, by girdling it with guineas, one to every three parts of an inch; then, let me tell thee, that my vengeance will fetch a great premium here!”

Compare, for example, these well-known lines from Emerson’s essay “Self-Reliance” (1841):

Society everywhere is in conspiracy against the manhood of every one of its members. Society is a joint-stock company, in which the members agree, for the better securing of his bread to each shareholder, to surrender the liberty and culture of the eater. The virtue in most request is conformity. Self-reliance is its aversion. It loves not realities and creators, but names and customs.

Whoso would be a man must be a nonconformist. He who would gather immortal palms must not be hindered by the name of goodness, but must explore if it be goodness. Nothing is at last sacred but the integrity of your own mind. Absolve you to yourself, and you shall have the suffrage of the world.

Should we see Ahab, in this chapter, as a self-reliant individual on the Emersonian model, eschewing economic logic for a logic that he himself will define? Starbuck’s response is to switch from economics to religion: “Vengeance on a dumb brute!” cried Starbuck, “that simply smote thee from blindest instinct! Madness! To be enraged with a dumb thing, Captain Ahab, seems blasphemous.”

Ahab parries with a long speech in which he shifts from economics to metaphysics with a Platonic overlay:

“Hark ye yet again, — the little lower layer. All visible objects, man, are but as pasteboard masks. But in each event — in the living act, the undoubted deed — there, some unknown but still reasoning thing puts forth the mouldings of its features from behind the unreasoning mask. If man will strike, strike through the mask! How can the prisoner reach outside except by thrusting through the wall? To me, the white whale is that wall, shoved near to me. Sometimes I think there’s naught beyond. But ’tis enough. He tasks me; he heaps me; I see in him outrageous strength, with an inscrutable malice sinewing it. That inscrutable thing is chiefly what I hate; and be the white whale agent, or be the white whale principal, I will wreak that hate upon him. Talk not to me of blasphemy, man; I’d strike the sun if it insulted me. For could the sun do that, then could I do the other; since there is ever a sort of fair play herein, jealousy presiding over all creations. But not my master, man, is even that fair play. Who’s over me? Truth hath no confines. …”

In class, I spend a lot of time unpacking this part of Ahab’s speech. Ahab appropriates the economic language of agent and principal and turns it to his own purposes. Agency is the power to act, by forming an intention and then effecting it. Often, an person will be simultaneously a principal — forming an intention — and an agent — effecting it. But there are times when a principal might delegate the power to act to someone else. That’s exactly what Bildad, Peleg, and the other owners of the Pequod have done. They are the principals who have designated the crew as their agents and delegated to the crew the task of hunting whales and returning with whale oil that can be sold on the Nantucket market.

Ahab takes that language and applies it both to the whale Moby Dick and to something else, which he describes as “that inscrutable thing.” Maybe Nature. Maybe God. What Ahab cannot abide is the idea that the loss of his leg was merely an accident, as Starbuck suggests, something that arose out of the “blindest instinct” of an animal. No, for Ahab, the loss of his leg had to have significance, had to be the result of an intention. Whether that intention was formed by Moby Dick or some power that used Moby Dick, Ahab doesn’t know. What he does know is that the white whale is his only access to “that inscrutable thing” that formed the intention of maiming him, so “be the white whale agent, or be the white whale principal, [he] will wreak that hate upon him.”

Some other things to note about the passage: 1) The idea that visible objects are but pasteboard masks is a double invocation of the Classical tradition: a hint of Platonism plus the Greek tragic mask; 2) the idea of compensation, so important to Emerson, is evoked in the idea of “ever a sort of fair play herein”; 3) Ahab’s claim that he would “strike the sun if it insulted me” is an evocation of the epic tradition: think of Book 15 in the Iliad when Apollo — the sun god — descends to the battlefield to help the Trojans.

Starbuck loses this particular war of words, and Ahab brings out the grog. But he isn’t done yet. After letting the ordinary seamen drink from the flagon of grog, he instructs the harpooneers to remove the tips from their harpoons, and — reversing the order of command — orders the mates to serve as cup-bearers to the harpooneers. The overturned harpoon tips are used as “murderous chalices” to hold the grog, which is “hot as Satan’s hoof.”

What Ahab has done is to create a communion ceremony — a demonic communion — that binds the crew to him: “Commend the murderous chalices! Bestow them, ye who are now made parties to this indissoluble league. Ha! Starbuck! but the deed is done.”

By the end of the chapter, Ahab has fully emerged as the “mighty pageant creature, formed for noble tragedies” whom Ishmael had described in “The Ship.” And for the next few chapters, the novel will suddenly erupt into the dramatic mode, with soliloquies and a play script — registering at the level of textual form the disruption of the Pequod‘s mission by Ahab.

“The Quarter-Deck” chapter is read for us by Cornish author Jon Cleave and illustrated with the photograph Black Fountain by Sarah Pickering. The silver gelatin photograph is presented courtesy of the artist and the Meessen De Clercq Gallery, Brussels.