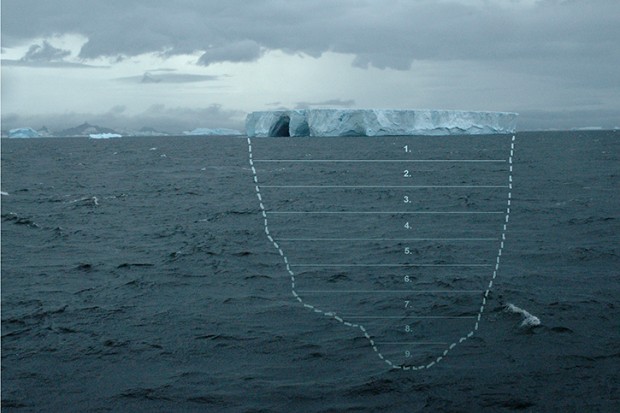 One of the fun things for me about re-reading and teaching Moby-Dick is that I’m always noticing new things in the text. This propensity can be dangerous if you’re lecturing, because you turn to one page, notice something interesting on the facing page, and risk veering off onto a tangent. On the other hand, some of my best insights have come off-the-cuff while riding the wave of one of the tangents.

The thing I usually say about the chapter “Enter Ahab; To Him Stubb” is that, since Ahab has actually “entered” the foreground of the text in the previous chapter, the title isn’t descriptive so much as suggestive: of stage directions, preparing the way for the tangent into drama that the text will take in a few chapters. Today, though, I’m intrigued by what seems to be a description of Ahab’s claustrophobia:

“Old age is always wakeful; as if, the longer linked with life, the less man has to do with aught that looks like death. among sea-commanders, the old greybeards will oftenest leave their berths to visit the night-cloaked deck. It was so with Ahab; only that now, of late, he seemed so much to live in the open air, that truly speaking, his visits were more to the cabin, than from, the cabin to the planks. “It feels like going down into one’s tomb,” — he would mutter to himself, — “for an old captain like me to be descending this narrow scuttle, to go to my grave-dug berth.”

Confinement of any kind is anathema to Ahab, who will declare in a crucial moment that’s coming soon, “Who’s over me? Truth hath no confines.”

In this chapter, Ahab’s restlessness is depicted as an effect of his age, perhaps the sense that this voyage is his last chance to find the whale he seeks. One of the things that’s misleading about the casting of Gregory Peck as Ahab in John Huston’s film adaptation film adaptation is that Peck doesn’t play Ahab as an old man (see yesterday’s illustration). Ahab tells Starbuck late in the novel about his first time whaling: “On such a day — very much such a sweetness as this — I struck my first whale — a boy-harpooneer of eighteen! Forty — forty — forty years ago!” That puts Ahab at 58, which pretty old for the mid-nineteenth century and very old if you’re a whaleman. What is it that Indiana Jones says to Marion near the end of Raiders of the Lost Ark? “It’s not the years, honey, it’s the mileage.”

Today’s illustration by Simon Faithfull is entitled 9/10ths (2005). It’s a digitally annotated digital photograph, representing how little of an iceberg is visible above water. That’s not a bad metaphor for thinking about sperm whales or the text of Moby-Dick.

For today’s chapter, though, it’s a little ironic, unless we imagine that we’re looking at Faithfull’s iceberg as it recedes into the distance. As the chapter opens, we discover that we’ve traveled quite a distance in a relatively few pages. Leaving Nantucket in “Merry Christmas” (Chapter 22), we’ve arrived at the equator 7 chapters later: “Some days elapsed, and ice and icebergs all astern, the Pequod now went rolling through the bright Quito spring, which, at sea, almost perpetually reigns on the threshold of the eternal August of the Tropic.” Ishmael is making reference to the weather in Quito, Ecuador, unchanging because it’s located along the equator in the tropics (the area bounded by the Tropic of Cancer in the North and the Tropic of Capricorn in the South).

This chapter is all about what’s astern: icebergs behind the ship and the restless Ahab at the back of the ship. And I wonder whether the “silent steersman … watch[ing] the cabin-scuttle” is not, if not always, then frequently Ishmael himself. (Ishmael will tell us later on about a misadventure while he’s at the tiller that nearly scuttles the ship.) Ishmael notes that “some considerating touch of humanity” was “in” Ahab on those nights, as he refrained from pacing around in order not to wake the sailors sleeping below with the thumping of his peg-leg. The last time we heard about Ahab’s “humanities,” it was on Day 16, with Peleg telling Ishmael about Ahab’s wife and child, a disturbing notion that Ahab spends practically not time with his wife and child, leaving them behind to go whaling. Here too, the “humanity” yields to Ahab’s obsession (about which we will soon get all the details), and the chapter ends with a confrontation between him and Stubb, the second mate, who has the temerity to ask Ahab to put something on the peg to muffle its sound.

Ahab gives him an insult worthy of Falstaff, and the chapter ends with a long monologue in which Stubb upbraids himself for taking the insult passively. It’s a gratuitously long passage, unless we see it as a warm-up for the text’s coming eruption in to drama.

The chapter is read for us today by Thomas White.