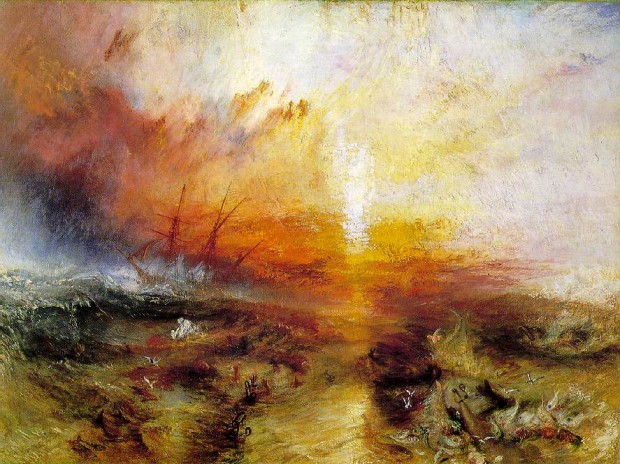 Today’s chapter, “The Spouter-Inn,” is longer than those that preceded it, clocking in at just under 35 minutes. It’s read by author, screenwriter, and playwright Nigel Williams.

“The Spouter-Inn” is one of my favorite chapters in Moby-Dick, and I generally spend a lot of time with it when I’m lecturing on the novel. For one thing, it begins with a marvelous reflection on the interpretation of artworks, when Ishmael enters the inn and notices what he calls “a boggy, soggy, squitchy picture” hanging on the wall. I like the passage so much that I’m going to quote it in its entirety:

On one side hung a very large oil-painting so thoroughly besmoked, and every way defaced, that in the unequal cross-lights by which you viewed it, it was only by diligent study and a series of systematic visits to it, and careful inquiry of the neighbors, that you could any way arrive at an understanding of its purpose. such unaccountable masses of shades and shadows, that at first you almost thought some ambitious young artist, in the time of the New England hags, had endeavored to delineate chaos bewitched. But by dint of much and earnest contemplation, and oft repeated ponderings, and especially by throwing open the little window towards the back of the entry, you at last come to the conclusion that such an idea, however wild, might not be altogether unwarranted.

But what most puzzled and confounded you was a long, limber, portentous, black mass of something hovering in the centre of the picture over three blue, dim, perpendicular lines floating in a nameless yeast. A boggy, soggy, squitchy picture truly, enough to drive a nervous man distracted. Yet was there a sort of indefinite, half-attained, unimaginable sublimity about it that fairly froze you to it, till you involuntarily took an oath with yourself to find out what that marvellous painting meant. Ever and anon a bright, but, alas, deceptive idea would dart you through. — It’s the Black Sea in a midnight gale. — It’s the unnatural combat of the four primal elements. — It’s a blasted heath. — It’s a Hyperborean winter scene. — It’s the breaking- up of the ice-bound stream of Time. But at last all these fancies yielded to that one portentous something in the picture’s midst. That once found out, and all the rest were plain. But stop; does it not bear a faint resemblance to a gigantic fish? even the great Leviathan himself?

In fact, the artist’s design seemed this: a final theory of my own, partly based upon the aggregated opinions of many aged persons with whom I conversed upon the subject. The picture represents a Cape-Horner in a great hurricane; the half-foundered ship weltering there with its three dismantled masts alone visible; and an exasperated whale, purposing to spring clean over the craft, is in the enormous act of impaling himself upon the three mast-heads.

I like the fact that to arrive at interpretation, Ishmael must consult some experts — “many aged persons” — suggesting the collective nature of artistic or literary interpretation, in which interpretations pile one upon the other over time, some times in agreement, sometimes in disagreement. The meaning of art, this little scene suggests, is constructed rather than transmitted. And I like the acknowledgment that the context of interpretation makes a difference: Ishmael can’t arrive at an interpretation without “throwing open the little window towards the back of the entry.”

Scholars think that the description is meant to invoke paintings like J. M. S. Turner’s “The Slave Ship” (first exhibited in 1840 and shown above), and it’s thought that Melville saw paintings by Turner during his trip to England on the eve of his beginning Moby-Dick. (There’s an interesting account of Melville’s relationship to Turner’s art by Réka Takács Tóth, available here.) But what to make of those three blue lines that Ishmael describes. Try drawing it for yourself: is there a hidden (hint: Biblical) meaning that the passages evokes but avoids?

The chapter, of course, is the one in which our narrator, Ishmael, meets his future bosom body, the South Seas harpooneer “Queequeg” in a slapstick scene that evokes the genre of “Down East Humor” made popular by writers like Seba Smith. The meeting between the two is orchestrated by the inn’s landlord, Peter Coffin, whose name sounds allegorical but is actually derived from a longstanding Nantucket surname. (Well, maybe it’s a little bit allegorical too.) Ishmael’s attempt to make sense of what he sees in the room — first, Queequeg’s possessions, then Queequeg himself  — is a study in both rationalization and the application of inadequate interpretive frames of reference.

The scene sometimes puts me in mind of Lockwood’s introduction to his landlord Heathcliff in Emily Brontë’s novel Wuthering Heights. Lockwood expects to be in a house that follows all the rules that apply within a typical novel of manners, but he discovers to his chagrin that he’s in a rather different sort of novel. (That “obscure cushion full of something like cats”? Sorry, Lockwood, it’s a pile of dead foxes.) Queequeg, of course, turns out to be a lot more friendly than Heathcliff.

I always imagine Coffin standing at the door of the room he entices Ishmael to share with Queequeg, maybe even peeking through the keyhole. Williams does a pretty a good job with the scene.  My favorite line comes near the end: “Better sleep with a sober cannibal than a drunken Christian.” Have a listen.