Another Year, Another Marhaba Week 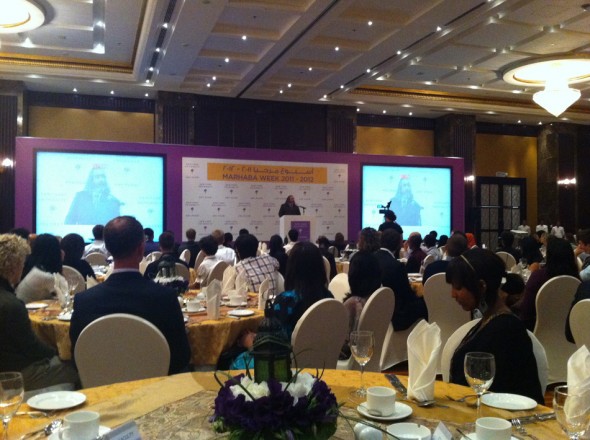 A little under a year ago, NYUAD held an Iftar dinner for the Class of 2014 in a Ramadan tent set up in the parking lot of the Downtown Campus. I had the honor of giving a talk on that evening on the subject of “fallibilism.” There were newspaper reporters present on that night and for much of Marhaba week. A story appeared in the English language daily The National the next day, and I was subsequently described in a longer piece in the newspaper’s weekly magazine as having “steely, talk-show affability.” The mobile generator blew out temporarily shortly before my talk. The lights were blinding (because it was all being videotaped). The final call to prayer sounded just after I began speaking, and no one seemed to be sure whether I should stop or continue. The whole evening was a bit of an adventure.

Tonight was the opening Iftar of NYUAD Year 2. I decided to wear the same suit, though I substituted a different Liberty of London tie.

The tie wasn’t the only thing that was different. The biggest difference: no tent. We were in a rather standard multipurpose room in the Beach Rotana Hotel. A second big difference: no reporters.

It felt like a typical ceremonial dinner to open a college year. There was abundant food and excellent speeches: from Vice Chancellor Al Bloom and Dean of Students Julie Avina on the opportunities that NYUAD would make available to the Class of 2015; from student body president Mohammed Omar on leadership and responsibility; from philosopher Matty Silverstein on the pleasures of the intellect (or why “coursework” is a misnomer); and from former Sheikh Mohammed Scholar Khulood al Aityah on the meaning of Ramadan.

Okay, Khulood’s moving translation of the call to prayer that ends the fast isn’t something that takes place at the start of the year on many campuses in the US, but the subsequent rush to the buffet had all the earmarks of … college!

In short, there was something pleasingly normal about the evening, in marked contrast to last year’s nerves and media and over-the-top attention.

As if, this year, NYUAD has slipped into something like a comfortable groove. To me, that feels like progress. I look forward to seeing  how the year unfolds. And this year, I’ll get to be here for all of it.

[Photo: Matty Silverstein talking about the pleasures of the intellect.]