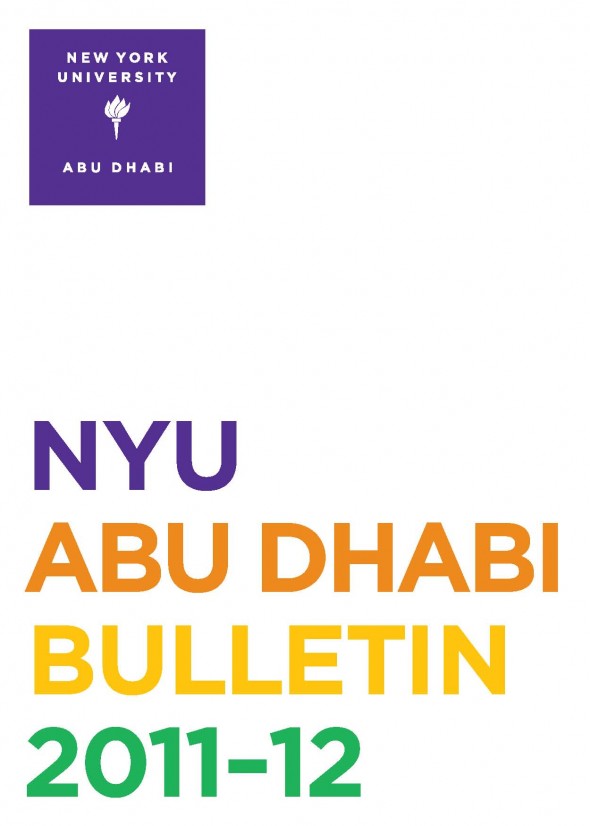 A month from today we’ll be touching down in Abu Dhabi — many bags in tow but hopefully not much baggage from New York — to begin a sojourn of at least a year. It’s hard to believe that three years of accelerating involvement with the NYUAD project are finally leading my family and me to an apartment in Sama Tower. As I spent today suggesting a few final emendations for the next edition of the NYUAD Course Bulletin, I read through the book  and found my enthusiasm for the project once again renewed.

I was reminded of one of my favorite passages in Thoreau’s Walden, which comes from the chapter “Where I Lived and What I Lived For”:

Let us spend one day as deliberately as Nature, and not be thrown off the track by every nutshell and mosquito’s wing that falls on the rails. Let us rise early and fast, or break fast, gently and without perturbation; let company come and let company go, let the bells ring and the children cry- determined to make a day of it. Why should we knock under and go with the stream? Let us not be upset and overwhelmed in that terrible rapid and whirlpool called a dinner, situated in the meridian shallows. Weather this danger and you are safe, for the rest of the way is down hill. With unrelaxed nerves, with morning vigor, sail by it, looking another way, tied to the mast like Ulysses. If the engine whistles, let it whistle till it is hoarse for its pains. If the bell rings, why should we run? We will consider what kind of music they are like. Let us settle ourselves, and work and wedge our feet downward through the mud and slush of opinion, and prejudice, and tradition, and delusion, and appearance, that alluvion which covers the globe, through Paris and London, through New York and Boston and Concord, through Church and State, through poetry and philosophy and religion, till we come to a hard bottom and rocks in place, which we can call reality, and say, This is, and no mistake; and then begin, having a point d’appui, below freshet and frost and fire, a place where you might found a wall or a state, or set a lamp-post safely, or perhaps a gauge, not a Nilometer, but a Realometer, that future ages might know how deep a freshet of shams and appearances had gathered from time to time. If you stand right fronting and face to face to a fact, you will seethe sun glimmer on both its surfaces, as if it were a cimeter, and feel its sweet edge dividing you through the heart and marrow, and so you will happily conclude your mortal career. Be it life or death, we crave only reality. If we are really dying, let us hear the rattle in our throats and feel cold in the extremities; if we are alive, let us go about our business.

When I teach Walden, I try to point out how it is a work that situates itself within many genres: it’s settlement narrative, a natural science treatise, an economic treatise, an autobiography, and a work of Transcendentalist philosophy. In part it’s about stripping life down to its essentials, searching for that “hard bottom,” that “point d’appui,” as he puts it in the passage above. He’s looking for “a place where you might found a wall or a state,” a phrase that indicates that he’s not only building a house in the woods as part of a personal experiment, but undertaking a philosophical though experiment about how we might best reconstitute society so that it can enable more of us to live life more fully.

There’s something of that idealistic spirit behind the NYU Abu Dhabi venture. We’re building walls — a few in downtown Abu Dhabi, a lot more on Saaidyat Island — with the ultimate goals of remaking the state of global education and helping the Emirati remake Abu Dhabi into an idea capital, where knowledge and culture are created. I was pleased to see that a lot of that spirit has made its way into the Bulletin.

By the way, if you’re interested in my take on that passage from Thoreau, you can look at this lecture from my contribution to NYU’s Open Ed project.