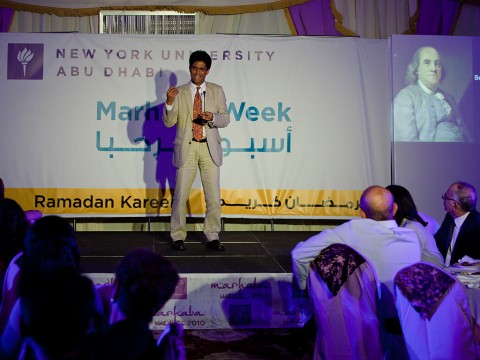 One of the concepts that I deliberately left unaddressed in the lecture that I recorded for the NYAUD Summer Colloquium was fallibilism, which Appiah discusses in his chapter on counter-cosmopolitanism. Appiah describes falliblism as “the sense that our knowledge is imperfect, provisional, subject to revision in the face of new evidence” (p. 144). In my reading of Appiah’s account of cosmopolitanism, fallibilism is a crucial part of the rationale for the kinds of conversations that he advocates, conversations in which we are willing to put our ideas to the test and to have our minds changed by those with whom we are conversing.

It is precisely because we are fallible — because we are imperfect, error-prone beings — that we really need to listen to other people. Why? Because they may have a better account of the truth than we have or simply a better idea. Talking to other people and keeping an open mind as we do it makes us more likely to be able to recognize when we are in error — and more likely to be willing to admit and correct our errors.

I withheld a discussion of fallibilism from the summer lecture because I wanted to talk about it to the NYUAD community in person at the first Iftar dinner ( you know, the one that required the bigger tent). I began my talk by reminding the students of some of the ways that we had begun thinking about cosmopolitanism during the summer colloquium: I quickly went through the roots of the idea of the “citizen of the world” in Greek thought and then its emergence as an alternative to conceptions of nationalism during the European Enlightenment.

And I reminded them of one of Appiah’s crucial philosophical (and rhetorical) strategies: taking terms that we think we understand — like “conversation” or “contamination” — and leading us rethink them, deepening our conceptions (as in the case of “conversation”) or even reversing the value-judgments that we customarily ascribe to them (as in the case of “contamination”).

I took the opportunity to perform a similar operation on a term that Appiah doesn’t use explicitly but that is implicit in his accounts of cosmopolitan epistemology: perfectionism. We often use the term, I suggested, to indicate something negative: the tendency not to let go of a piece of work until we consider it “perfect.” But in philosophical terms,”perfectionism” is not about producing a perfect product. After all, human beings aren’t capable of being perfect. Only God is capable of being perfect. Human beings exist in what scientists might think of an asymptotic relation to perfection: we can work every day toward perfection and through hard work and diligence make ourselves better and better at whatever it is we wish to do.

In other words, we should regard perfectionism as an approach to life in which we understand ourselves to be error-prone beings who can nonetheless learn from our mistakes. We can work to perfect ourselves and our endeavors each day, knowing that we can never fully succeed. The point of perfectionism isn’t product: it’s process.

As you’ve no doubt guessed from the picture above, I offered the great American polymath Benjamin Franklin as an example of a productive approach to the idea of perfectionism. He’s a good model for NYUAD students, I suggested, because he valued education so highly. But he was an autodidact: in contrast to men like John Adams and Thomas Jefferson, Franklin could not expect a college education as his due. He had to apprentice himself to his brother, who was a printer. A liberal arts education was something he had to acquire for himself. And he did. He was a voracious reader, who established lending libraries. He was also a scientist, famous for his experiments with lightning and electricity, eventually becoming a Fellow of the Royal Society, one of the few 18th-century Americans to be so honored.

Franklin’s Autobiography is regarded by scholars of American literature as a text that plays a seminal role in the creation of the mythology of the self-made man. The ability to recognize and correct error proves to be a crucial part of Franklin’s approach to self-making. Throughout the Autobiography, Franklin uses a metaphor drawn from the printer’s trade to describe his approach to perfectionism, describing his mistakes as errata, or printer’s errors. In Franklin’s day, type was set by hand, with individual fonts of type laid down on a bed to form words and sentences. The printer would print a proof sheet, which would then be proofread. If you discovered an erratum, you could correct it by pulling out the incorrect or defective font and replacing it with the correct one.

Here is Franklin’s description of a youthful folly in which he borrowed from some money that he was supposed to be keeping safe for a friend of his brother:

“The breaking into this money of Vernon’s was one of the first great errata of my life; and this affair show’d that my father was not much out in his judgment when he suppos’d me too young to manage business of importance.”

Later on, however, he is able to correct his error:

“Mr. Vernon, about this time, put me in mind of the debt I ow’d him, but did not press me. I wrote him an ingenuous letter of acknowledgment, crav’d his forbearance a little longer, which he allow’d me, and as soon as I was able, I paid the principal with interest, and many thanks; so that erratum was in some degree corrected.”

Franklin describes several events in his life this way, including his broken courtship of the woman who would eventually become his wife. Some of the errata Franklin is unable to correct during his lifetime, but by pointing them out in his Autobiography as errors he wished he could have corrected, he is essentially able to correct them for posterity. Chalk one up for the power of narrative.

I suspect that Franklin’s aspirations might resonate with many of the students who are attending NYUAD: he’s an autodidact, a voracious reader, a successful businessman, a famous scientist, and ultimately a diplomat and citizen of the world. I find this paragraph from a pamphlet “Information to Those Who Would Remove to America” (1784) to be a good summary of Franklin’s perspective:

Tolerably good workmen in any of those mechanic arts are sure to find employ, and to be well paid for their work, there being no restraints preventing strangers from exercising any art they understand, nor any permission necessary. If they are poor, they begin first as Servants or Journeymen; and if they are sober, industrious, and frugal, they soon become Masters, establish themselves in Business, marry, raise Families, and become respectable Citizens.

Notice how this vision of the opportunity that America provides depends on the idea of toleration (“there being no restraints preventing strangers from exercising any art they understand”).

What I finally tried to suggest at the Iftar dinner was that the idea of fallibilism provides a link between the ways in which the students were thinking about cosmopolitanism during the summer colloquium — as an approach to cultural politics that stands in contradistinction to nationalism and universalism — and the experience that they were about to have in their classrooms.

Fallibilism means embracing the fact that we are all imperfect beings, whether we are students or teachers. Don’t expect your teachers to be perfect — or even to be authority figures who have all the answers. Think of them as guides whose job is to lead you (and themselves) not to final answers but rather to more complex questions based on the provisional answers that you discover. Don’t be afraid to make mistakes when speaking in class or in public, but be willing and able to recognize and admit when you’re in error. Then adjust your ideas to take into account the new truths that you’ve discovered. Franklin believed that something called “truth” exists, but he wasn’t willing simply to take it on faith: he believed in testing ideas for himself.

As one great sage of American educational television put it: “Take chances! Make mistakes! Get messy!”