Yesterday, I went with a group of students from the NYU residence hall in which I live up to the IMAX Theater on Broadway and 68th Street to see Martin Scorsese’s Rolling Stones concert documentary, Shine a Light. The film was shot two years ago up Broadway at the Beacon Theater by an all-star team of cameramen, and it’s more than just a filmed concert: it’s a concert reimagined through the cinematic imagination of a filmmaker who happens to be a life-long Stones fan.

The craggy faces, hands, and instruments of the Stones fill the screen in extreme close-up, and they look great, wrinkles and all. The cameras hug Jagger as he careens about the stage, struggling to keep up with him. Every now and then, the camera lingers for a moment on Keith’s or Ronnie’s fingers and guitar, and the riff that’s being played jumps out of the soundtrack for an added shot of presence. The film’s editing is kinetic, and Scorsese manages to capture the pure joy of being the Stones on stage. The film isn’t about trying to understand who the Stones are; it’s about representing the larger-than-life selves into which they transform themselves when they’re playing live. And in IMAX, they’re larger-than-larger-than life.

The film shows us the late-model Stones at their best: they’ve gotten tighter on stage with age, and I’ve often entertained the heretical notion that the Stones sound better with Darryl Jones on bass than they did with Bill Wyman. And there are three terrific guest appearancs: a worshipful Jack White III singing “Lovin’ Cup” with Mick; Buddy Guy inspiring worship from none other than Keith on “Champagne and Reefer”; and Christina Aguilera injecting a growling jolt of sexual energy into her duet with Mick on “Live With Me.” 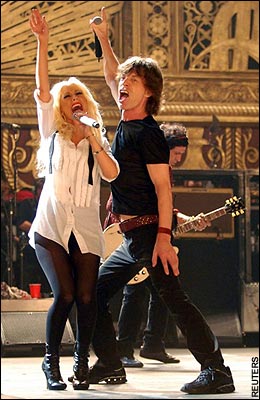 The Stones no longer “matter” in the way that they did back in the day, when they seemed to be dangerous countercultural voices, and their last album, A Bigger Bang, was entertaining but not nearly as significant as, say, The Rising by Bruce Springsteen. The Stones are an oldies band these days, but for my money they’re still “the greatest rock ‘n’ roll band in the
world.”

Scorsese caught the band during two marvelous shows in an intimate venue, but if you’d been there you wouldn’t have gotten to see what you see in Shine a Light. You need the light that Scorsese’s cameras shine on the band for that.

If you’re a Stones fan, a Scorsese fan, or a fan of concert films, make sure to get uptown and see it in IMAX. It may only be rock ‘n’ roll, but chances are you’ll like it.

[Click here to see a brief clip of Mick and Christina doing their thing.]