Some Girls and the MXR Phase 90 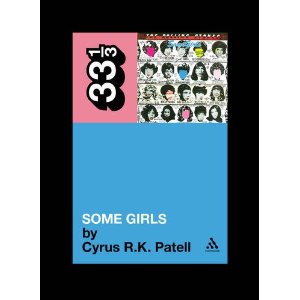 I’ve been listening to the newly released remastered version of Some Girls and enjoying the 12 bonus tracks that accompany it. I’ll be writing about those tracks here in the months to come with the idea of producing a Kindle-based companion volume to my book on the album, which appeared in Continuum’s 33 1/3 series.

Meanwhile, my friend and former doctoral student Robert Gunn (a member of the English Department at the University of Texas, El Paso) recently sent me this reminiscence prompted by his reading of the book:

I really enjoyed your reading of the album in the context of your personal experience of NYC as a kid.  As an ill-reformed rock and roll guitar player myself, I must say I also delighted in your discussion of the technical side of the Stones’ sound, including Keef’s infatuation with open G tuning on five strings.  As it happens, Some Girls was the first full Stones album I bought, in high school (I, too, began with Hot Rocks, and wore it out before bothering to venture deeper into the canon).  Nowadays, Beggars Banquet through Exile remain steady in the rotation (love the country blues stuff), but Some Girls has enduring appeal.

As I was reading, I felt wistful reflection back on my own unselfconscious identification with Jagger’s lyrics.  It was kind of comical, actually—I mean, I knew he was talking about New York in “Miss You” and “Shattered,” but somehow that place didn’t seem real to me; I was sure he was talking, instead,  about that somewhere else I always wanted to be, in a mystical zone of cool and where everyone had that jaded, faded, rocknroll strut.  And even if no one else knew what it was about, that’s where I belonged (and often felt I was, in my own mind).  And so I’d walk down the rainy streets of Eugene, Oregon, humming riffs to myself, thinking you needed to be tough tough tough tough tough tough to live in this town(!), and keeping an eye out for all of those Puerto Rican girls who (I dearly and earnestly hoped) were just dying to meet me.

But the best part was the sound—my best friend and I were in rival bands, and I was extremely envious of his old MXR Phase 90, which produced the “Shattered” sound perfectly; my band played that song for a while, too, but I dropped it because, ultimately, it sounded like shit approximated on my Peavey digital flanger (a truly worthless relic of 80s hair metal; I don’t think I ever, even once, produced a cool sound off of that thing).

You can hear Keith Richards talking lovingly about that MXR box, by the way, in a recent interview broadcast on NPR’s World Cafe show. The segment lasts about 30 minutes, with Richards getting the first 15 and Mick Jagger getting the second. No, they weren’t in the same room; in fact, the interviews were conducted by different interviewers. Apparently, after all the sniping that’s occurred in the wake of the release of  generated by Richards’s autobiography, Life, it’s hard to imagine the Glimmer Twins ever being in the same room together, let alone sharing the same stage.

In the meantime, I’m thankful that those Some Girls-era outtakes have been polished up and given a legitimate release. Wish they’d included “Fiji Jim” though.