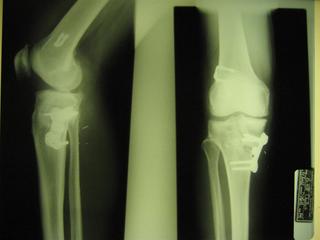 It’s now been ten weeks since my knee surgery, and everything is going beautifully. The x-rays pictured above were taken three weeks ago during my third post-op visit to my surgeon, Dr. Andrew Feldman. (At the left is a side view, at right a frontal view.) He was very pleased with the way that they looked, pointing out that the line where he made his cut (just to the left of the plate and equidistant between the screws on the righthand x-ray) was barely visible, indicating that the bone was healing perfectly. He said that the realignment of the leg was exactly what he wanted it to be and that the reconstructed ligament felt strong.

He cleared me to begin bearing weight on the leg, suggesting that I move to one crutch, then to a cane, and then to unassisted walking as I felt ready. My target was to be able to put 50% of normal weight on the leg after a week, and full weight a week after. I was able to shed the full-length brace at the beginning of week eight in favor of a much smaller brace, which I dont’ have to wear at night. Lately, I’ve only been wearing it when I go outside.

As it turns out, I was able to progress more quickly, putting full weight on the leg with a week and moving to a cane shortly thereafter. I’m now walking around without the cane, and I try to minimize the limp as much as possible.

My physical therapy sessions have become more demanding, lasting between 1.5 and 2 hours. We’ve added riding on the stationary bicycle at low resistance for 10 minutes, isometric exercises for the quads, and some weight-training for the quads. Russian stim is no longer necessary.  When I’m at the gym by myself, I’ll usually start with 30 minutes of bike riding, followed by the complete leg routine and whatever upper-body exercises I still have the energy for.

Because it’s being used now, the leg is sore much of the time — not painful, just sore, with the occasional twinge around the area where the plate was affixed. My therapists started massaging the scar area a few weeks ago to keep the skin from adhering unnaturally to the tissue below, and it’s made a difference. There’s less discomfort in the area now, and the numbness has decreased.

I’m not due to see Dr. Feldman for another five weeks if all keeps going well. My goal is to be able to walk into his office without limping at all. Walking on the leg does feel a little strange, because I feel conscious that the outside of my knee is bearing more weight than it used to and that I’m a little knock-kneed. Whether I can actually feel that, or whether I think I’m feeling it because I know that’s what the surgery was supposed to do, I can’t say. It does feel, however, as if I’m re-learning how to walk properly.

Click on the continuation link, if you’d like to compare the present x-ray to the one that was taken before the surgery. 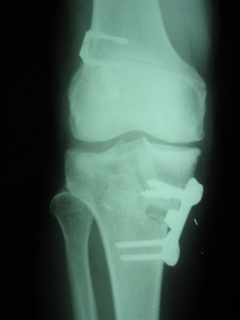 The picture on the left was taken late last year. Part of the reason that the surgery lasted so long was that the hardware below the knee was precisely in the place where the cut into the tibia had to be made. That clip had to be removed first. The clip above was, I believe, left in place. I’m not sure that you can see the hardware for the new ACL graft in the x-ray on the left, but you sure can see my new hardware, the plate and screws that kept the allograft bone in place. And you can get a sense of the new angle of my leg. The correction was 10 degrees.

Below is a picture of the knee from the side. 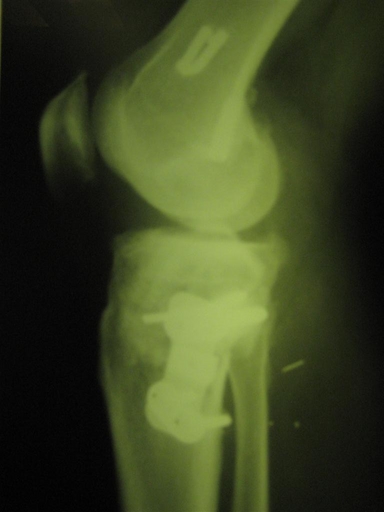