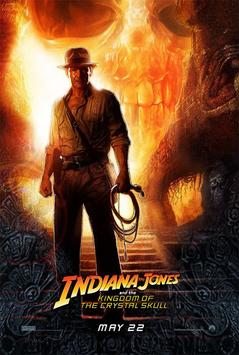 I’ve just returned from a 12:01 a.m. showing of Indiana Jones and the Kingdom of the Crystal Skull. I wanted to make sure that I saw it before I had a chance to read any of the reviews.

I’ll admit I spent most of the day worried that the movie was going to be a disappointment, because I couldn’t avoid hearing about some pre-release negative commentary on the internet and a lukewarm response when the film was shown on Sunday at Cannes.

Like the other Indiana Jones films, it’s a rollercoaster ride, though it’s a rollercoaster whose twists and turns we’ve been taught to anticipate by the previous three Indy rides. The film doesn’t have the wonder of Raiders of the Lost Ark, the over-the-top kineticism of Indiana Jones and the Temple of Doom, or the wonderful character development of Indiana Jones and the Last Crusade. And it doesn’t need to. It’s like a reunion, in which old friends get together to remember good times and have a few new adventures that are fun even if they don’t quite match the thrills of yesteryear.

Where the three previous films paid homage to 1930s-style serials, the Crystal Skull pays homage to the sci-fi films of the 1950s — and to the three films that preceded it. Indy’s older now, a little thicker around the middle, as is his old flame, Marion Ravenwood, but it’s still great to see them back in action. Especially Karen Allen as Marion. (I had the same crush on her back in the day that David A. Kaplan describes in this column from Newsweek.) Part of the pleasure of the film is the way in which it refers back to moments from the earlier films (and to moments in Steven Spielberg’s pre-Indiana Jones films). The earlier sequels had some of the same referentiality (remember Indy and the two swordsmen in Temple of Doom), but the new film is chock full of them. Some made find it a little too nostalgic, but it reminded me of the way in which I felt back in 1981 when I first saw Raiders. It didn’t produce the same feeling, but the reminder was enough.

The plot is silly in a kind of 1950s sci-fi film way and not nearly as muddled as the critics are suggesting. Sure there’s a Maguffin that ostensibly drives the plot like the ark, the Sankara stone, and the Holy Grail in the earlier film, but like it’s predecesors the film is really about something ese. Let’s just say that like Raiders it’s about rediscovering old feelings; like the Last Crusade it’s about sons getting to know fathers.

Of all the reviews that I’ve sped through before I sat down to write this post, this one from Salon comes the closest to capturing what I felt about the film.

Oddly enough, I managed to marry a woman who has never seen an Indiana Jones film, but she knows how much I love them and has agreed to watch them with me. I think I’ll show her Raiders and Last Crusade and take her to Crystal Skull. They make a nice trilogy.