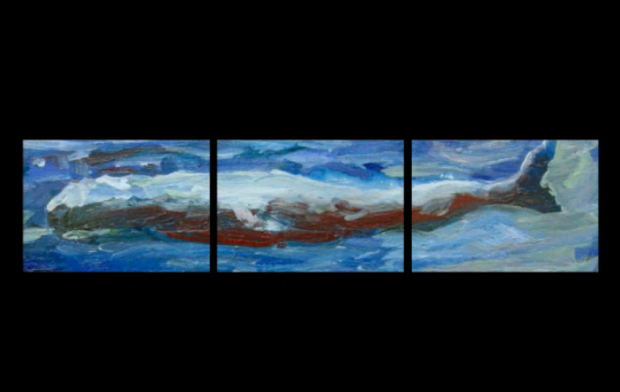 One of the remarkable aspects of this chapter is that Ishmael has occasion to pinpoint the “blessed minute” — “fifteen and a quarter minutes past one o’clock P. M. of this sixteenth day of December, A. D. 1850.” [Actually, the first American edition read “1851,” the year of publication rather than composition; December 16 would have been a month and two days after the book’s publication. The error was corrected in the English edition.]

Another remarkable aspect is Ishmael’s use of the phrase “finny tribes.” WIkipedia tells me that “finny tribe” was a term used by the Rosicrucians for fish. I’m not sure what to make of this fact, or the fact that it was embedded not in entries on “finny tribe” or “Rosicrucians” but rather in an entry about a Scottish dance music band called Finitribe. I, for one, first encountered the phrase as an example of the literary device of “peirphrasis” — deliberate wordiness or “circumlocution” — in a class on “The Age of Johnson” taught by Walter Jackson Bate. I’m pretty sure it was in a poem by either Joseph or Thomas Warton, but I haven’t been able to find it again.

In any case, the question that Ishmael addreseses — unanswered even to the minute of his writing — is whether the whale’s spout consists of water or vapor. Unlike the members of the “finny tribe” the whale has lungs instead of gills, meaning that when he sounds the deep he must have a way of holding his breath and must have a huge supply of oxygenated blood. Ishmael notes that whales seem to want to take 70 breaths, exhaling 70 spouts, when they’re at the surface, and if they’re interrupted, they will resurface and take further breaths until they have reached their quota.

Along the way, Ishmael tells us, that because the whale’s “windpipe solely opens into the tube of his spouting canal, and as that long canal — like the grand Erie Canal — is furnished with a sort of locks (that open and shut) for the downward retention of air or the upward exclusion of water, therefore the whale has no voice.” The editors of the Norton Critical Edition tell us that this is “a supposition since disproved. Whales ‘sing,’ according to the great modern whale authority Roger Payne, Among Whales (1995).”

But sperm whales do not sing: they “click” (or maybe “creak”):

I think I’m inclined to agree with Ishmael on the subject of the sperm whale’s voice.

Ultimately, however, “The Fountain” is another chapter about religion, philosophy, and the limitations of science. Don’t try to ascertain the answer to the question of the whale’s spout through empirical observation, because getting too close to the spout is dangerous:

You cannot go with your pitcher to this fountain and fill it, and bring it away. For even when coming into slight contact with the outer, vapory shreds of the jet, which will often happen, your skin will feverishly smart, from the acridness of the thing so touching it. And I know one, who coming into still closer contact with the spout, whether with some scientific object in view, or otherwise, I cannot say, the skin peeled off from his cheek and arm. Wherefore, among whalemen, the spout is deemed poisonous; they try to evade it. Another thing; I have heard it said, and I do not much doubt it, that if the jet is fairly spouted into your eyes, it will blind you. The wisest thing the investigator can do then, it seems to me, is to let this deadly spout alone.

And so Ishmael is content to “hypothesize … that the spout is nothing but mist.” Mist suits “the great inherent dignity and sublimity of the Sperm Whale” better than water. Veering away from science into other realms of thought, Ishmael tells us (half jokingly — but only half):

I am convinced that from the heads of all ponderous profound beings, such as Plato, Pyrrho, the Devil, Jupiter, Dante, and so on, there always goes up a certain semi-visible steam, while in the act of thinking deep thoughts. While composing a little treatise on Eternity, I had the curiosity to place a mirror before me; and ere long saw reflected there, a curious involved worming and undulation in the atmosphere over my head. The invariable moisture of my hair, while plunged in deep thought, after six cups of hot tea in my thin shingled attic, of an August noon; this seems an additional argument for the above supposition.

The fact that you can sometimes see a rainbow in the whale’s spout is further evidence of his hypothesis, because “rainbows do not visit the clear air; they only irradiate vapor.” Moreover, the rainbow is an apt symbol of the way in which, “through all the thick mists of the dim doubts in my mind, divine intuitions now and then shoot, enkindling my fog with a heavenly ray.” At the end of the chapter, Ishmael leaves us with another version of the thought with which he concluded his chapter on Jonah, splitting the difference between faith and reason in order to find truth: “Doubts of all things earthly, and intuitions of some things heavenly; this combination makes neither believer nor infidel, but makes a man who regards them both with equal eye.”

“The Fountain” is read by Scott McVay, who (with Roger Payne) first described the song of the humpback whale in a 1971 article entitled “Songs of Humpback Whales,” which appeared in the journal Science. The chapter is illustrated with a three-channel video installation entitled Whale (2006) by Jacco Olivier. Visit the “Big Read” site to view the video. The still shown above doesn’t do justice to the work! Last year, Olivier installed six outdoor video animations in New York’s Madison Square Park. Click here to read about that project.