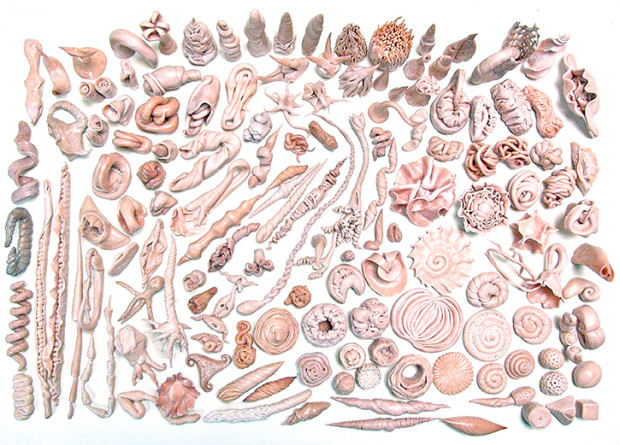 In “The Fossil Whale,” Ishmael continues to think about the task he has undertaken: to write a book that does justice to whales and whaling. “To produce a mighty book,” he declares, “you must choose a mighty theme. No great and enduring volume can ever be written on the flea, though many there be who have tried it.” Ishmael jokes that the job requires big words and thus a big dictionary, in his case “a huge quarto edition of Johnson.” It’s a bonus that Johnson himself possessed “uncommon personal bulk.”

Shall we discuss “penmanship”? Bah. Use “chirography” instead! And let’s make liberal use of hyperbole: “Give me a condor’s quill! Give me Vesuvius’ crater for an inkstand!”

Having spent a lot of time on the present condition of the whale and its hunters, Ishmael now turns to the past, describing prehistoric (“pre-adamite”) whales (and making liberal use of volume 27 of the Penny Cyclopedia). He ends the chapter with a quote from a famous medieval cosmopolitan, Al-Hasan ibn Muhammad al-Wazzan al-Fasi, known more popularly in Europe as “Leo Africanus.” Ishmael calls him “the venerable John Leo, the old Barbary traveller” and quotes from his A Geographical Historie of Africa (1550; English translation 1600) a description of a mosque that al-Wazzam found near Massa on the Atlantic Coast of Africa:

Not far from the Sea-side, they have a Temple, the Rafters and Beams of which are made of Whale-Bones; for Whales of a monstrous size are oftentimes cast up dead upon that shore. The Common People imagine, that by a secret Power bestowed by God upon the Temple, no Whale can pass it without immediate death. But the truth of the Matter is, that on either side of the Temple, there are Rocks that shoot two Miles into the Sea, and wound the Whales when they light upon ’em. They keep a Whale’s Rib of an incredible length for a Miracle, which lying upon the Ground with its convex part uppermost, makes an Arch, the Head of which cannot be reached by a Man upon a Camel’s Back. This Rib … is said to have layn there a hundred Years before I saw it. Their Historians affirm, that a Prophet who prophesy’d of Mahomet, came from this Temple, and some do not stand to assert, that the Prophet Jonas was cast forth by the Whale at the Base of the Temple.

Al-Wazzan, a Moorish diplomat who was captured by Spanish corsairs, taken to Rome, and baptized in 1520, was a man who moved between the early modern Christian and Islamic worlds. He was the subject of the widely read novel Léon, l’Africain (1986; English, Leo Africanus) by the Lebanese-born French writer Amin Maalouf. In her study of the life of Al-Wazzan, Trickster Travels: A Sixteenth-Century Muslim Between Worlds (2006), the historian Natalie Zemon Davis Ishmael writes that Maalouf “created in Leo Africanus/al-Hasan a figure who perfectly represented his own [Maalouf’s] way of rising above constrictive and exclusive identities of language, religion and nation. ‘I come from no country, no city, no tribe,’ his hero says at the opening of the novel. ‘I am the son of the highway, my country is a caravan … all languages, all prayers belong to me.'”

Although Ishmael does not overtly compare himself to Al-Wazzan, instead asking his reader in a direct address at the end of the chapter to contemplate the “Africa Temple of the Whale” and “silently worship there.” Al-Wazzan seems like an apt model for Ishmael himself, who tells us at the outset, “I am tormented with an everlasting itch for things remote. I love to sail forbidden seas, and land on barbarous coasts.” “The Fossil Whale” is read by Elizabeth Bradfield. The illustration is Still Life (2011; polymer clay and high gloss acrylic enamel) by Alice Herrick.