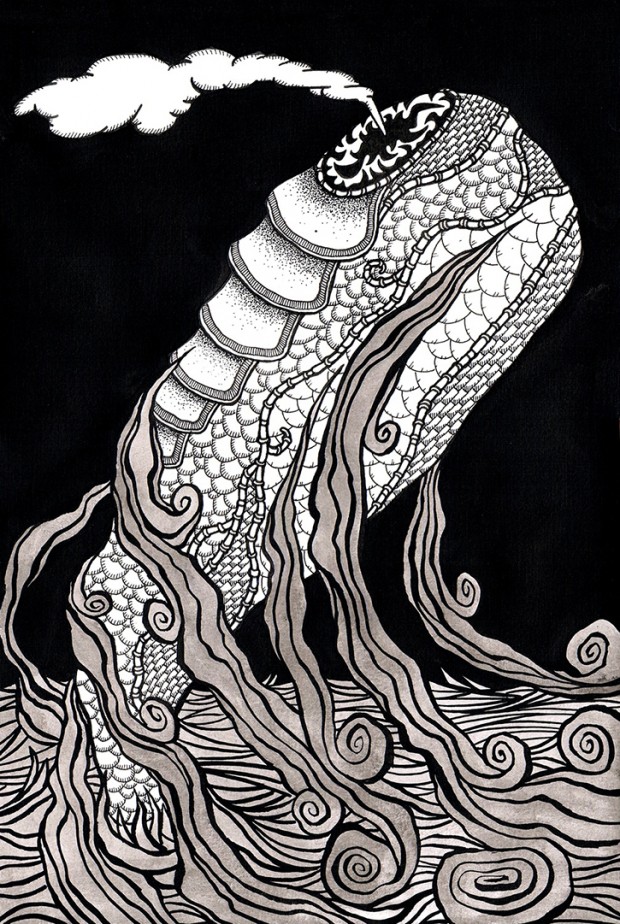 You’ll remember that one of the inspirations for Moby-Dick was the story of the whaleship Essex, which was rammed twice by a sperm whale on the morning of November 20, 1820. The survivors of the wreck were the captain and two mates and the crews of their whale-boats. Electing not to sail to the nearby Marquesas islands for fear that cannibals lived there, those who survived to return whom did so only through the bitter irony of becoming cannibals themselves. The first mate, Owen Chase, wrote an account entitled Narrative of the Most Extraordinary and Distressing Shipwreck of the Whale-Ship Essex (1821). A copy of the book was given to Melville by Chases’s nephew Jack during a gam and Melville would subsequently catch a glimpse of Chase himself during a later meeting of whaleships.

Here is Chase’s description of the whale’s second attack:

I was aroused with the cry of a man at the hatchway, “here he is — he is making for us again.” I turned around, and saw him about one hundred rods directly ahead of us, coming down apparently with twice his ordinary speed, and to me at that moment, it appeared with tenfold fury and vengeance in his aspect. The surf flew in all directions about him, and his course towards us was marked by a white foam of a road in width, which he made with the continual violent thrashing of his tail his head was about half out of water, and in that way he came upon, and again struck the ship. … He struck [the ship] to windward, directly under the cathead, and completely stove in her bows.

Ishmael does not mention the Essex in this chapter: it is mentioned in the “Extract” section at the beginning of the novel and again in “The Affadavit,” but this chapter implicitly makes the argument that Chase’s account of the sinking of the Essex is plausible because of the anatomy of the sperm whale’s head. Ishmael describes how the whale’s head has been ideally formed to serve as a battering ram. 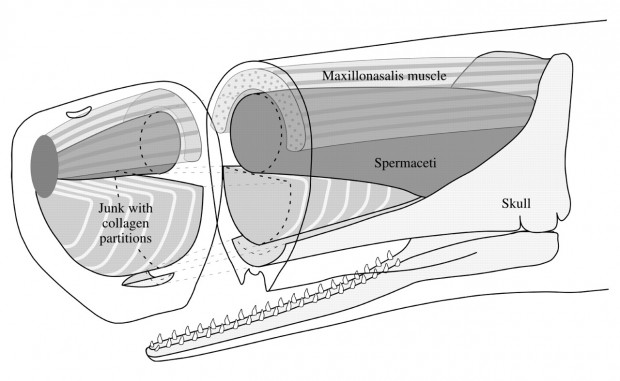 The picture above comes from article “The face that sank the Essex: potential function of the spermaceti organ in aggression” (2002) by David R. Carrier, Stephen M. Deban, andJason Otterstrom, which appeared in the Journal of Experimental Biology. that argues in favor of the idea that the spermaceti organ of the whale evolved to serve as a weapon in combat between whales. Here is the abstract of the article:

Herman Melville’s fictional portrayal of the sinking of the Pequod was inspired by instances in which large sperm whales sank whaling ships by ramming the ships with their heads. Observations of aggression in species of the four major clades of cetacean and the artiodactyl outgroup suggest that head-butting during male—male aggression is a basal behavior for cetaceans. We hypothesize that the ability of sperm whales to destroy stout wooden ships, 3-5 times their body mass, is a product of specialization for male—male aggression. Specifically, we suggest that the greatly enlarged and derived melon of sperm whales, the spermaceti organ, evolved as a battering ram to injure an opponent. To address this hypothesis, we examined the correlation between relative melon size and the level of sexual dimorphism in body size among cetaceans. We also modeled impacts between two equal-sized sperm whales to determine whether it is physically possible for the spermaceti organ to function as an effective battering ram. We found (i) that the evolution of relative melon size in cetaceans is positively correlated with the evolution of sexual dimorphism in body size and (ii) that the spermaceti organ of a charging sperm whale has enough momentum to seriously injure an opponent. These observations are consistent with the hypothesis that the spermaceti organ has evolved to be a weapon used in male—male aggression.

Ishmael, of course, also has another motive: to pave the way for the reader to believe in the events that he will be narrating at the end of his narrative. At the chapter’s end, the reader is implicitly likened to “the weakling youth lifting the dread goddess’s veil at Sais,” a story from Egyptian mythology about a youth who is rendered senseless after lifting the veil of a statue of the goddess Isis. The story is dramatized in Friedrich Schiller’s poem “The Veiled Statue at Sais,” which the editors of the Norton Critical Edition

Here’s the final stanza of the poem:

He speaks, and, with the word, lifts up the veil.
Would you inquire what form there met his eye?
I know not,–but, when day appeared, the priests
Found him extended senseless, pale as death,
Before the pedestal of Isis’ statue.
What had been seen and heard by him when there
He never would disclose, but from that hour
His happiness in life had fled forever,
And his deep sorrow soon conducted him
To an untimely grave. “Woe to that man,”
He warning said to every questioner,
“Woe to that man who wins the truth by guilt,
For truth so gained will ne’er reward its owner.”

In other words, dear reader, are you sure that you can handle the truth about the whale?

The chapter is read for us by Richard Sabin, Collections Manager at the Life Sciences Department, LS Vertebrates Division, at the Natural History Museum in London. Today’s wonderful illustration is Moby-Dick (2011; 8.25? by 12?; ink on watercolor paper) by Matt Kish, whom listeners may know as the author of Moby-Dick in Pictures: One Drawing for Every Page (2011). You can see the illustrations for each page by using this link to visit his visiting his website.