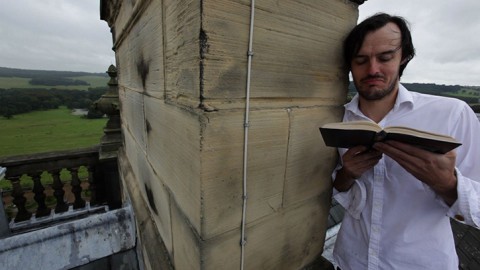 “The Affidavit” is another of those chapters devoted to information about the history of whaling, with Ishmael once again adopting the lawyerly pose that he affected in “The Advocate” in order to make an argument about the verisimilitude of the narrative that he will, at some point, allow to run its course. In my comment on the previous chapter, “The Chart,” I noted that there Ishmael was depicting a scene that he couldn’t actually have seen. For some readers, this switch to omniscience might have the effect of undermining Ishmael’s trustworthiness as a narrator. So Ishmael proceeds to present evidence in “The Affidavit” to support the analysis he presents in “The Chart,” with the aim of making us see that “the foregoing chapter, in its earlier part” — the section depicting Ahab poring over his charts — “is as important a one as will be found in this volume.”

Ishmael is telling us, in other words, how to read the book he is narrating: we are meant to understand it as a realistic narrative no matter how far-fetched the events it relates seem to be. He wants us to Moby Dick as a real, palpable creature, not simply a writer’s device: “So ignorant are most landsmen of some of the plainest and most palpable wonders of the world, that without some hints touching the plain facts, historical and otherwise, of the fishery, they might scout at Moby Dick as a monstrous fable, or still worse and more detestable, a hideous and intolerable allegory.” So Ishmael relates a series of historical anecdotes that demonstrate that sperm whales are dangerous not only because they are such inmense animals, but also because they have been known to act with intention and malice toward the ships that hunt them.

Here Ishmael mentions the story of the Essex, which was famously sunk in 1820 by a sperm whale that seemed to ram the ship intentionally. Ishmael notes that, “after the severest exposure, part of the crew reached the land in their boats.” He vouches for the truth of this version of the story, noting, “I have seen Owen Chace [sic], who was chief mate of the Essex at the time of the tragedy; I have read his plain and faithful narrative; I have conversed with his son; and all this within a few miles of the scene of the catastrophe.” This part of Ishmael’s career parallels Melville’s, who, as a sailor aboard the whaleship Acushnet, met Owen Chase’s son, Jack. The two struck up a brief friendship, and Chase gave Melville a copy of his father’s memoir about the sinking of the Essex and its aftermath.

Ishmael mentions the story of the Essex almost in passing, but for Melville, the story would prove to be haunting: it was one of the primary inspirations for the writing of Moby-Dick. And Ishmael, in using the story of the Essex simply as evidence that sperm whales can act with intent, omits what is most notorious about the story. Although the ship sank near Tahiti, the Captain, two mates, and a number of sailors decided to steer their three surviving whaleboats toward the western shore of South America — some 3,000 nautical miles away — because they feared that Tahiti was home to cannibals. What befell them was the most hideous of situational ironies: seeking to avoid cannibals, the survivors were forced to become cannibals themselves, eating the flesh of their dead companions in order to survive. In the most hideous circumstance of all, in the boat manned by the ship’s captain, which had become separated from the others, the survivors drew lots: one loser would have to die so the others would live, the other loser would have to be the one to pull the trigger. It was the cabin boy, the youngest member of the crew, who ended up giving up his life.

What’s interesting to note is the way in which Melville’s novel reverses the story of the Essex. After a confrontation with a sperm whale, the crew of the Essex faces the specter of cannibalism. But Ishmael faces the specter of cannibalism first in the person of Queequeg, and unlike the crew of the Essex he confronts and ultimately embraces it, instead of avoiding it. The confrontation with the whale comes later, though this chapter foreshadows it with references to a “catastrophe” and a “marvellous [sic] event.”

Finally, in this chapter Ishmael reveals that his voyage on the Pequod is only one of “many others” he’ has made to the Pacific as a whaler more than once and witnessed many seemingly improbable events related to whaling first-hand. Pequod, Indeed, he downplays the story of the eventual confrontation with Moby Dick as merely one of a number of similar stories. suggesting that “not only is the most marvellous event in this book corroborated by plain facts of the present day, but that these marvels (like all marvels) are mere repetitions of the ages; so that for the millionth time we say amen with Solomon — Verily there is nothing new under the sun.”

Ishmael doth protest too much, methinks. For if he has been a-whaling so many times and has his pick of marvels to describe, why is it that he relates the events of his first voyage — when he was but “a green hand at whaling” — at such great length? Is it because, among marvels, the events of this story are the most marvelous?

“The Affidavit” is read by Anthony Caleshu, who is a professor at the School of Humanities and Performing Arts, Plymouth University. The accompanying illustration is a photo, Paul Hilton reading Moby-Dick on the roof of Harewood House (2009) by Paul Rooney. Visit the “Big Reads” site to see a higher resolution version.