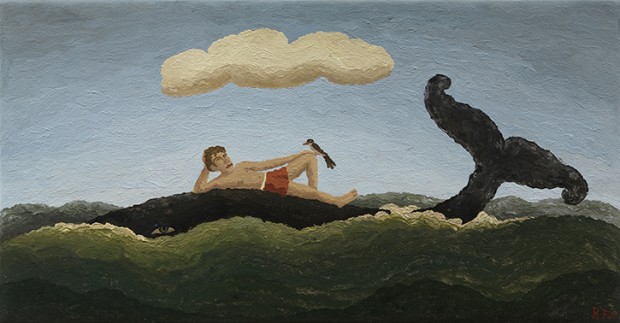 In this chapter, Ishmael gives further attention to the right whale’s head, which he’s already told us lacks the symmetrical dignity of the sperm whale’s head. If the round front of the sperm whale’s forehead may be said to resemble a Roman chariot, the right whale’s head reminds us instead of a shoe — the kind of shoe that might house “that old woman of the nursery tale, with the swarming brood, might very comfortably be lodged, she and all her progeny.”

From fairy tales, Ishmael’s roving mind moves on to other comparisons, thinking of the right whale’s head as a massive tree crowned with a bird’s nest, or as the king of the sea with a crown of barnacles and crabs. He notes the whale’s “hare lip” — a fissure in the mouth that resembles the entrance to a wigwam, serving once, perhaps, as the door through which Jonah was admitted. We are reminded of the use of whalebone in mid-nineteenth-century ladies’ fashions and finally return to a more detailed consideration of the whale’s anatomy.

The discipline with which he leaves us — having ventured through literature, history, religion, and economics — is philosophy:

Can you catch the expression of the Sperm Whale’s there? It is the same he died with, only some of the longer wrinkles in the forehead seem now faded away. I think his broad brow to be full of a prairie-like placidity, born of a speculative indifference as to death. But mark the other head’s expression. See that amazing lower lip, pressed by accident against the vessel’s side, so as firmly to embrace the jaw. Does not this whole head seem to speak of an enormous practical resolution in facing death? This Right Whale I take to have been a Stoic; the Sperm Whale, a Platonian, who might have taken up Spinoza in his latter years.

What interests me about this particular formulation is that Ishmael has identified himself, earlier in the novel, with both the Stoic and the Platonic philosophical traditions. In “Loomings,” he describes the difficulty of adjusting to the experience of whaling by claiming that “The transition is a keen one, I assure you, from the schoolmaster to a sailor, and requires a strong decoction of Seneca and the Stoics to enable you to grin and bear it.” And in “The Masthead,” he describes himself as  a “sunken-eyed young Platonist” who “kept but sorry guard” when atop the masthead: “With the problem of the universe revolving in me, how could I — being left completely to myself at such a thought-engendering altitude, — how could I but lightly hold my obligations to observe all whale-ships’ standing orders, ‘Keep your weather eye open, and sing out every time.'”

But ultimately it is the sperm whale with which Ishmael seems ultimately to identify. Remember that in the first chapter he suggests that whaling is his “substitute for pistol and ball” — suicide by other means. But in making this point he contrasts with Cato, the Roman Stoic philosopher: “With a philosophical flourish Cato throws himself upon his sword; I quietly take to the ship.”

Platonist it is then. And, apparently, sperm whale. Interesting choice of alter-egos aboard the Pequod.

The chapter is read by Ruth Leeney, who is a member of the Namibian Dolphin Project. The illustration is Happy Days (2012) by the Spanish artist Ramiro Fernandez Saus. Click here to see a companion piece. Both of them capture the idea of the sailor as “sunken-eyed young Platonist.”