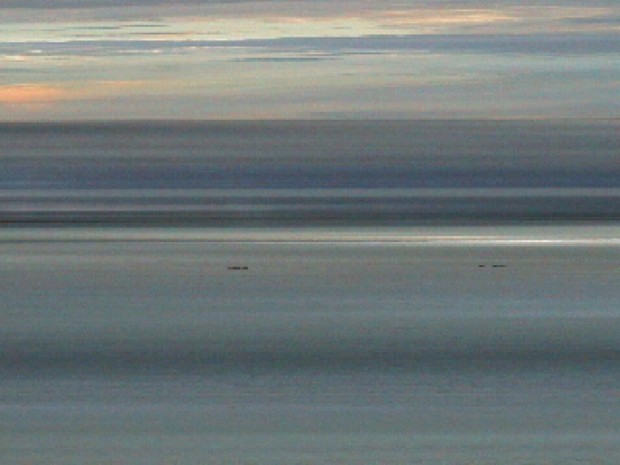 “The Chart” is another chapter in which Ishmael authoritatively reports things that he cannot have witnessed himself, once again playing with the conventions of “personal narrative.” Remember that what you’re reading — or listening to, or both — is in fact a yarn, a whale of a yarn (as it were). Ishmael

Had you followed Captain Ahab down into his cabin after the squall that took place on the night succeeding that wild ratification of his purpose with his crew, you would have seen him go to a locker in the transom, and bringing out a large wrinkled roll of yellowish sea charts, spread them before him on his screwed-down table. Then seating himself before it, you would have seen him intently study the various lines and shadings which there met his eye; and with slow but steady pencil trace additional courses over spaces that before were blank. At intervals, he would refer to piles of old log-books beside him, wherein were set down the seasons and places in which, on various former voyages of various ships, Sperm Whales had been captured or seen.

While thus employed, the heavy pewter lamp suspended in chains over his head, continually rocked with the motion of the ship, and for ever threw shifting gleams and shadows of lines upon his wrinkled brow, till it almost seemed that while he himself was marking out lines and courses on the wrinkled charts, some invisible pencil was also tracing lines and courses upon the deeply marked chart of his forehead.

The chapter goes on to describe the ways in which the mad Ahab applies reason to his hunt for Moby Dick, using charts like this one by Matthew Maury, to determine where he might have the best chance of finding the white whale: 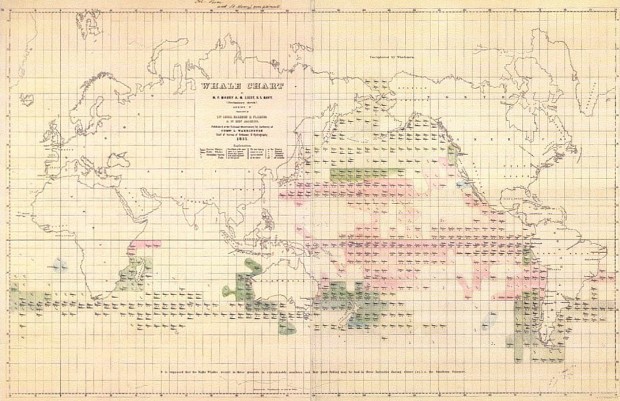 This seemingly mad task — trying to find one whale in all of the world’s oceans — isn’t as unreasonable as it might sound at first, because sperm whales have regular, seasonal feeding grounds, which whalers have noted over years. “Besides,” Ishmael tells us, “when making a passage from one feeding-ground to another, the Sperm Whales, guided by some infallible instinct — say, rather, secret intelligence from the Deity — mostly swim in veins, as they are called; continuing their way along a given ocean-line with such undeviating exactitude, that no ship ever sailed her course, by any chart, with one tithe of such marvellous precision.”

Leaving Nantucket on Christmas Day, might seem at first to be odd timing. If the Pequod were “to make the great passage southwards” around Cape Horn at the tip of South America (the route taken by the whaleship on which Melville had sailed), it would have arrived too late to cruise in the Pacific feeding-ground where Moby Dick was known to be found and where Ahab had encountered him before.” But Ahab isn’t late: he’s early and has the time to go the opposite direction, around Africa’s Cape of Good Hope:

the premature hour of the Pequod’s sailing had, perhaps, been correctly selected by Ahab, with a view to this very complexion of things. Because, an interval of three hundred and sixty-five days and nights was before him; an interval which, instead of impatiently enduring ashore, he would spend in a miscellaneous hunt; if by chance the White Whale, spending his vacation in seas far remote from his periodical feeding-grounds, should turn up his wrinkled brow off the Persian Gulf, or in the Bengal Bay, or China Seas, or in any other waters haunted by his race. So that Monsoons, Pampas, Nor-Westers, Harmattans, Trades; any wind but the Levanter and Simoom, might blow Moby Dick into the devious zig-zag world-circle of the Pequod’s circumnavigating wake.

Ahab may be a monomaniac but his mad single-mindedness has sharpened rather than diminished his intellect. 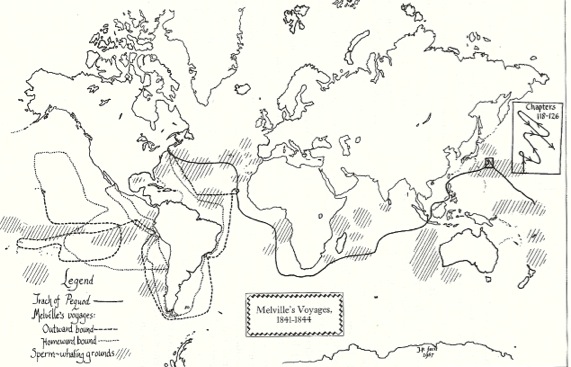 of Moby-Dick, ed. by Hershel Parker and Harrison Hayford.]

Night after night, Ahab pores over his charts, and when he finally falls asleep, his sleep is profoundly perturbed: “Ah, God! what trances of torments does that man endure who is consumed with one unachieved revengeful desire. He sleeps with clenched hands; and wakes with his own bloody nails in his palms.”

What interests me most in the chapter is the long final paragraph that follows this image of self-crucifixion. Here Ishmael takes the language of “principal” and “agent” that Ahab appropriates in “The Quarter-Deck” to describe Moby Dick and tries to turn it back on Ahab itself. Ask yourself whether his description of what happens to Ahab’s “soul” — conceived her in a kind a Whitmanian separation from the “self” (see “Song of Myself,” the lines beginning “I believe in you my soul …”)  — make sense.

And look for references to Milton’s Satan and to a book that Melville that Melville bought during his trip to London in 1849, Mary Shelley’s Frankstein; or, The Modern Prometheus.

“The Chart” is read by Molly McEntee and illustrated with an image from the “Seascapes” series by the British artist Susan Collins. The image is entitled Seascape, Bexhill-on-Sea, 29th October 2008 at 16:55pm (2008; © Susan Collins).