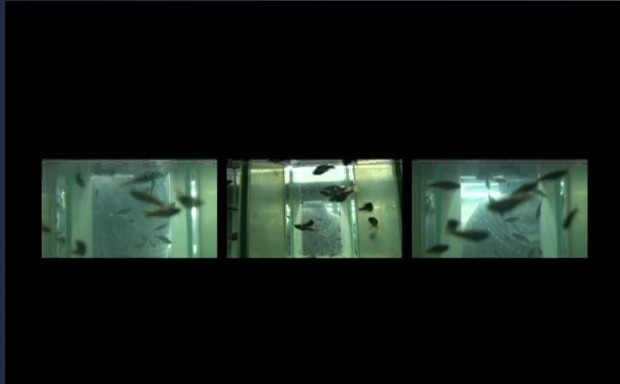 The dramatic mode continues in “Dusk,” with Starbuck taking center stage for a soliloquy: “(By the Mainmast; Starbuck is leaning against it.)”

Starbuck ruminates on the extent to which he has been co-opted by Ahab’s ideological pageant on the quarter-deck:

My soul is more than matched; she’s overmanned; and by a madman! Insufferable sting, that sanity should ground arms on such a field! But he drilled deep down, and blasted all my reason out of me! I think I see his impious end; but feel that I must help him to it. Will I, nill I, the ineffable thing has tied me to him; tows me with a cable I have no knife to cut.

Using a metaphor that recalls the railroad metaphor with which Ahab concluded the previous chapter, Starbuck laments how Ahab, the “madman,” has “drilled deep down, and blasted all my reason out of me.” All volition is gone: “Will I, nill I.” The next metaphor, however, has a strange valence to it: Starbuck imagines himself towed by a cable, as if he were a whaleboat — which would make Ahab the whale. Keep a lookout for further suggestions, as the novel progresses, of parallels between Ahab and his quarry.

Starbuck recognizes that Ahab’s showmanship is full of sophistry, that his apparent overturning of hierarchy in having the mates serve as cup-bearers to the harpooneers and in appealing directly to the crew, thereby sidestepping the mates, is a sham: “Who’s over him, he cries; — aye, he would be a democrat to all above; look, how he lords it over all below! ” And yet, he cannot help himself from feeling a touch of “pity” for Ahab even as he feels full of hate for the old man, because he senses that within Ahab there is “some lurid woe [that] would shrivel me up, had I it. ” And so here is Starbuck’s dilemma: he recognizes something of himself in Ahab and later on will resist the idea of fomenting mutiny lest he become the thing against which he is rebelling.

Starbuck clings to his humanity — “the soft feeling of the human in me” — and the little twinge of commonality that he feels with Ahab suggests that maybe Ahab, too, has his humanities, as Peleg suggested to Ishmael in “The Ship.” Starbuck ends the chapter with a prayer. We’ll see, in the course of time, whether it is answered.

Today’s chapter is read for us by Jeff Lawson. The still above is taken from the video by Deborah Robinson that accompanies the reading. It’s called Fish-eye-1 (2010). Visit the “Big Reads” site to watch it.