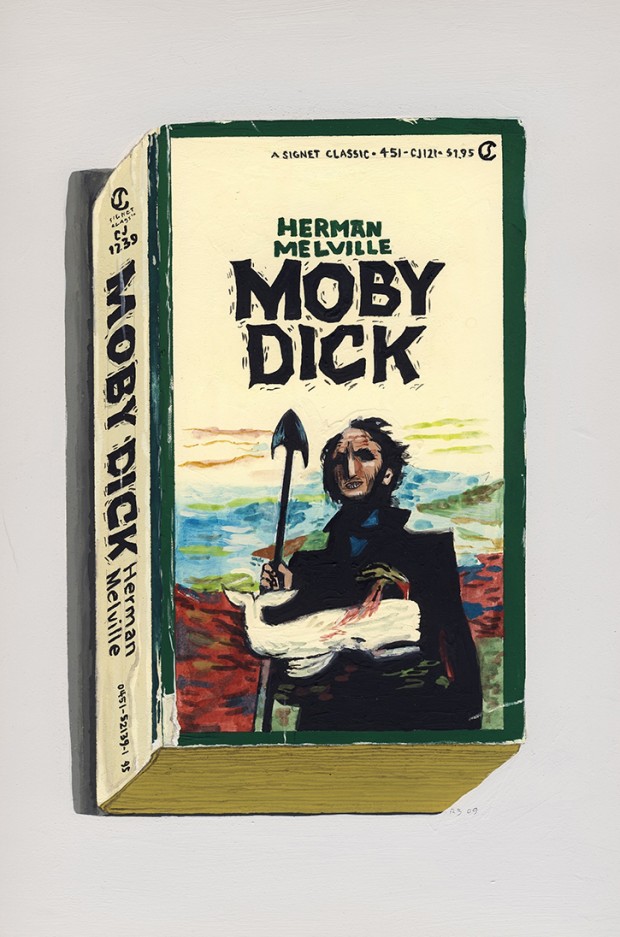 The repercussions of Ahab’s blasphemous ritual are registered textually in the chapters that follow “The Quarter-Deck.” Ishmael disappears from view, and we move from personal narrative to drama. This chapter, like the one before, begins with a stage direction: “(The cabin; by the stern windows; Ahab sitting alone, and gazing out.)” In his magisterial study,  American Renaissance:Art and Expression in the Age of Emerson and Whitman (1941), which did so much to cement Melville’s reputation as the foremost American novelist, F. O. Matthiessen described “Sunset” in this way:

What follows in that chapter of two pages may only be called a Shakespearean soliloquy. That mode became Melville’s most effective means of expressing Ahab’s development, since, isolated in his pride and madness, he tended to voice his thoughts to himself.

He later notes that much of Ahab’s speech to the crew in “The Quarter-Deck” can be printed as blank verse, as can the opening of the “Sunset” chapter:

I leave a white and turbid wake;
Pale waters, paler cheeks, where’er I sail.
The envious billows sidelong swell to whelm
My track; let them; but first I pass.

Matthiessen isn’t convinced that this compulsion to versify the prose is always a good thing: “As it wavers and breaks down again into ejaculatory prose, it seems never to have belonged to the speaker, to have been at best a ventriloquist’s trick. The weakness is similar in those speeches of Ahab’s that show obvious allusions to a series of Shakesepearean characters. The sum of the parts does not make a greater whole; each one distracts attention to itself and interferes with the singleness  of Ahab’s development.”

I love the image of the “iron crown of Lombardy” that Ahab uses. It reminds me Richard II’s dark night of the soul in Shakespeare’s play Richard II, perhaps the most tragic of the Bard’s history plays.

The chapter interests me because of the way in which it presents Ahab’s understanding, at this point in the novel, of predestination. Like Oedipus, he refuses to accept the prophecy that he has heard about himself and determines to make his own destiny: “The prophecy was that I should be dismembered; and — Aye! I lost this leg. I now prophesy that I will dismember my dismemberer. Now, then, be the prophet and the fulfiller one. That’s more than ye, ye great gods, ever were.” Which is pretty much blasphemy in anyone’s theological system.

The paradox of how predestination and free will could exist simultaneously was something with which Puritan theologians struggled, and the nineteenth-century metaphor that Ahab uses to describe his relation to fate is tellingly contradictory:

“Come, Ahab’s compliments to ye; come and see if ye can swerve me. Swerve me? ye cannot swerve me, else ye swerve yourselves! man has ye there. Swerve me? The path to my fixed purpose is laid with iron rails, whereon my soul is grooved to run. Over unsounded gorges, through the rifled hearts of mountains, under torrents’ beds, unerringly I rush! Naught’s an obstacle, naught’s an angle to the iron way!”

In evoking the railroad, Ahab is evoking the very emblem of nineentth-century American ingenuity, industry, and progress. It seems like the ultimate assertion of the human will , the domestication of nature. And Ahab’s quest to destroy Moby-Dick is, as well discuss later, an attempt to reassert humankind’s dominion over Nature. But what kind of agency does a railroad engine actually have? It runs on rails laid in advance, and cannot deviate from its course without the intervention of someone else (the track switcher). Is Ahab’s metaphor, ultimately, about the power of human agency — or the limitations placed on it by external forces? Or perhaps by the internal force of his own obsession?

Is Ahab’s fate ultimately going to be like that of Oedipus? It is precisely in trying to assert his free will and agency that Oedipus falls into the trap laid by fate.

“Sunset” is read for us by Raphaella Fearns. The illustration by Richard Baker, Moby Dick (2009; gouache on paper, 10 1/2?x 12?) fills me with nostalgia, because it’s a representation of the paperback that was the first Moby-Dick I ever owned.