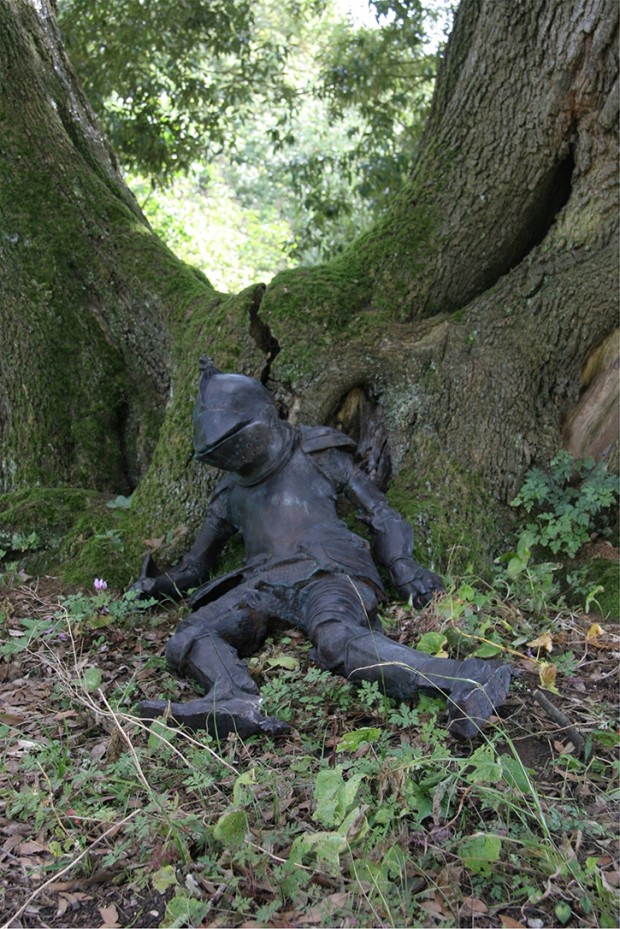 Today, in the first of two chapters called “Knights and Squires,” we begin to meet the crew of the good ship Pequod. The title invokes the ideas of questing and romance that are so important to the novel. Although the entire chapter is devoted to Ishmael’s characterization of the first mate, Starbuck, but we might think of it as offering a template for representation that Ishmael will apply to the rest of the crew, at least those on whom he trains his narrator’s eye.

In case you’re wondering, a certain multinational corporation headquartered in Seattle was, in fact, named after the character. Starbucks was originally founded in 1971 by three partners: English teacher Jerry Baldwin, history teacher Zev Siegl, and writer Gordon Bowker. Apparently, they first considered the name “Pequod,” but at least one of them had reservations, so “Starbucks” it was. One of the more whimsical footnotes in the current Norton Critical Edition

of Moby-Dick glosses the name “Starbuck” as follows:

An old Nantucket family name. In a triumph of modern marketing, the name of the ascetic Starbuck has become associated with exotic coffees and voluptuous additives, as well as baked goods that shame the nautical ‘duff’ or hardtack of Melville’s whale ships.

A comic footnote! Which is better than a footnote that spoils Melville’s comedy. (I’ll complain about that when we get to it.) The “modern marketing,” by the way, didn’t begin until after the teachers and the writer sold the company.

Starbuck will play an important role as events unfold. Like his captain, he has a wife and child ashore. Unlike his captain, he’s a practical man rather than an idealist: “I will have no man in my boat,” he says, “who is not afraid of a whale.” Ishmael tells us that “Starbuck was no crusader after perils.” Whaling is his business, and he means to return home to his wife and child.

Ishmael describes Starbuck in terms that recall the hero described by Ralph Waldo Emerson in his famous essay “Self-Reliance”:

But were the coming narrative to reveal, in any instance, the complete abasement of poor Starbuck’s fortitude, scarce might I have the heart to write it; for it is a thing most sorrowful, nay shocking, to expose the fall of valor in the soul. Men may seem detestable as joint stock-companies and nations; knaves, fools, and murderers there may be; men may have mean and meagre faces; but man, in the ideal, is so noble and so sparkling, such a grand and glowing creature, that over any ignominious blemish in him all his fellows should run to throw their costliest robes. That immaculate manliness we feel within ourselves, so far within us, that it remains intact though all the outer character seem gone; bleeds with keenest anguish at the undraped spectacle of a valor-ruined man. Nor can piety itself, at such a shameful sight, completely stifle her upbraidings against the permitting stars. But this august dignity I treat of, is not the dignity of kings and robes, but that abounding dignity which has no robed investiture. Thou shalt see it shining in the arm that wields a pick or drives a spike; that democratic dignity which, on all hands, radiates without end from God; Himself! The great God absolute! The centre and circumference of all democracy! His omnipresence, our divine equality!

It’s passages like this one that led the critic F. O. Mattheissen to laud Moby-Dick in his canon-making book American Renaissance: Art and Expression in the Age of Emerson and Whitman (1941) for its commitment to democratic values.

Ishmael wrns that he will, as his narrative continues, be “ascrib[ing] high qualities” to “mariners, renegades and castways,” a phrase that serves as the title of an indispensable study of the novel by the critic C. L. R. James whose reading of the novel was almost diametrically opposed to Matthiessen’s. James sees in Melville a genius who understood the perversion of democracy in the wake of industrial capitalism. James knew well what it meant to be a “renegade” and a “castaway”: the study was written while he was jailed in New York City awaiting a deportation hearing.

Today’s chapter is read by Jake Phillips and the accompanying illustration is a photograph of the bronze sculpture Armour Boy by the Welsh artist Laura Ford. The statute is one of a series of pieces that depict child-size knights who have fallen in battle. Visit the site to see a high resolution version of the photograph.