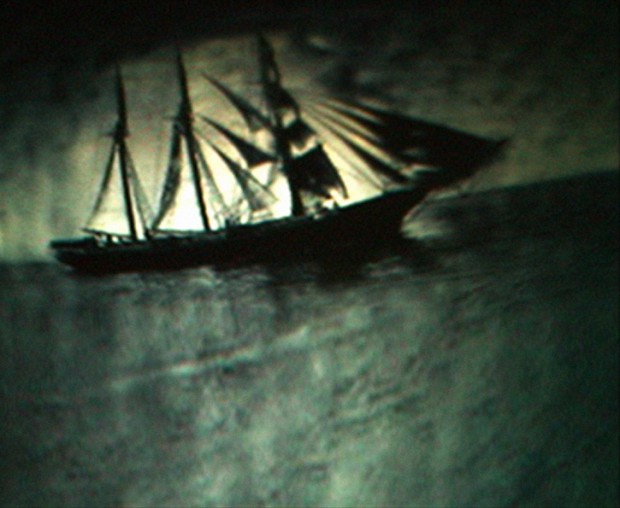 Writing about “The Advocate” on October 9, which happens to be my birthday, is a bit of serendipity since the chapter makes reference both to my alma mater — Harvard — and my current area of research and teaching: cosmopolitanism. One of the things about a whaling voyage, particularly at the outset, is that for long stretches of time, not much happens. The ship falls into its daily routine, and the days slide into one another until a whale is spotted and the chase is on. In the Norton Critical Edition

of the novel, this chapter falls on p. 97. We’ve still got a long way to go before “The First Lowering” on p. 181. And, in a way, what seems to many readers like the novel’s oddly digressive style may well be Ishmael’s attempt to reproduce the temporal experience of whaling: whalemen have a lot of time on their hands, which accounts for the development of the art of scrimshaw aboard whaleships.

So, now that he and Queequeg are “fairly embarked in this business of whaling,” Ishmael can turn his attention away from the daily routine of the ship and away from personal narrative in order to offer up a bit of philosophy or, at least, personal opinion. Here he assumes the guise of an “advocate” — in other words, a lawyer — who will defend “the business of whaling” — against various charges that have been leveled against it.

After asserting that whalemen are every bit as heroic as the soldiers whom “the world invariably delights to honor,” Ishmael sounds a note that resonates throughout the novel: “if the idea of peril so much enhances the popular conceit of the soldier’s profession; let me assure ye that many a veteran who has freely marched up to a battery, would quickly recoil at the apparition of the sperm whale’s vast tail, fanning into eddies the air over his head. For what are the comprehensible terrors of man compared with the interlinked terrors and wonders of God!” Ishmael is suggesting more than that the whale is an awe-inspiring example of Nature’s handiwork. He’s also laying the foundation for the idea that the whale — and Moby Dick in particular — is an agent of divine judgment. These ideas will be explored in vivid detail in the great chapter called “The Quarter-Deck,” which is fast approaching.

Meanwhile, Ishmael is interested less in war than in peace, and he promotes the idea that the industry of whaling has been a force for the advancement of cosmopolitan ideals:

I freely assert, that the cosmopolite philosopher cannot, for his life, point out one single peaceful influence, which within the last sixty years has operated more potentially upon the whole broad world, taken in one aggregate, than the high and mighty business of whaling. One way and another, it has begotten events so remarkable in themselves, and so continuously momentous in their sequential issues, that whaling may well be regarded as that Egyptian mother, who bore offspring themselves pregnant from her womb. It would be a hopeless, endless task to catalogue all these things. Let a handful suffice. For many years past the whale-ship has been the pioneer in ferreting out the remotest and least known parts of the earth. She has explored seas and archipelagoes which had no chart, where no Cook or Vancouver had ever sailed. If American and European men-of-war now peacefully ride in once savage harbors, let them fire salutes to the honor and glory of the whale-ship, which originally showed them the way, and first interpreted between them and the savages.

Ishmael here aligns himself with the cosmopolite philosopher by providing that philosopher with the salient example that he has been missing: for Ishmael it is not too outlandish to believe that the way to what Immanuel Kant called “perpetual peace” might be pioneered by whaleships.

Ultimately, for Ishmael (who like Melville was a school-teacher who did not attend a college), whaling provides the ultimate worldly education. Thinking about posterity, he ends the chapter by proclaiming:

And, as for me, if, by any possibility, there be any as yet undiscovered prime thing in me; if I shall ever deserve any real repute in that small but high hushed world which I might not be unreasonably ambitious of; if hereafter I shall do anything that, upon the whole, a man might rather have done than to have left undone; if, at my death, my executors, or more properly my creditors, find any precious MSS. in my desk, then here I prospectively ascribe all the honor and the glory to whaling; for a whale-ship was my Yale College and my Harvard.

The closing lines are an example of the kind of narrative self-consciousness that frequently marks the novel, which become poignant when one remembers how quickly Melville’s great hopes for the novel were dashed against the lee shore critical opinion and readers’ expectations. The reference to Ishmael’s “creditors” in the passage above is an example of the wry humor of the chapter, which is somewhat tongue-in-cheek — but not entirely.

One of the charges that Ishmael examines in the course of the chapter is that “The whale has no famous author, and whaling no famous chronicler.” Ishmael refutes that charge by citing the examples of the Book of Job, Alfred the Great, and Edmund Burke. More than 160 years later, we know that the hidden hope that lies behind those sentences has been realized by the very book in which they are enshrined.

“The Advocate” is read for us by James Woudhuysen. The evocative but untitled illustration is Anne Hamilton. Visit the “Big Reads” site to see a high resolution version.