Remembering the Great One

It pleases me that the Los Angeles Kings won the Stanley Cup this year — and not just because, as a diehard Ranger fan, I can never root for the New Jersey Devils in a Stanley Cup Final.

No, I’m pleased because I have a soft spot for Wayne Gretzky. (What hockey fan who ever had the privilege of watching him play doesn’t?) The Kings’ triumph was the fruition of a process that began in 1988 when Gretzky was traded by the Edmonton Oilers (whom he had led to four Stanley Cup championships) to the Kings. The trade caused heartache in Canada — one MP sought to have the government intervene to block the trade — but it became an opportunity for the NHL to broaden its appeal to fans not only on the West Coast but in the U.S. generally.

I began watching hockey in 1973, when the NHL still only had 16 teams. By the time I started college in the fall of 1979, the league had grown to 22 teams, having added the Washington Capitals and the Kansas City Scouts in 1974, and four teams from the defunct WHA — the Hartford Whalers, the Quebec Nordiques, the Winnipeg Jets, and the Oilers — in 1979. I rarely had occasion to see Gretzky when he came to the NHL; he played for a Western conference team, and I was a fan of an Eastern conference team (the Rangers) living in an Eastern Conference city (Boston).

Gretzky finished his career in New York, playing three seasons from 1996-1999, and watching him even then, in the twilight of his career, was a thrill. I marveled at the way he dipsy-doodled after carrying the puck over the blue line, passing it a trailing teammate and completely throwing off the defending team. I marveled at the way he set up behind his opponents’ net moving the puck around, waiting for the moment when he could pass to an open teammate or dart around to the front himself. Commentators called that area Gretzky’s “office.” 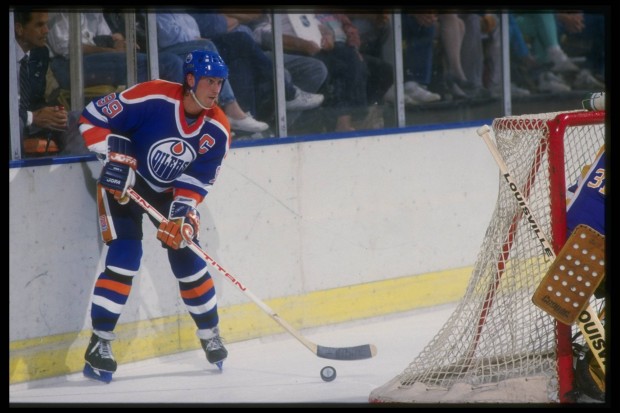 I reveled in Gretzky’s reunion with the Rangers’ captain Mark Messier in 1996 and lamented when Messier bolted for the Vancouver Canucks the next season. Gretzky’s last two years with the Rangers were difficult: the team was undergoing a transition and failed to make the playoffs either year. Gretzky soldiered through it all with grace and aplomb.

I still remember watching Gretzky’s final game in my small apartment in Washington Square Village, a 2-1 loss to the Pittsburgh Penguins in which Gretzky notched an assist on a goal by Brian Leetch. Jaromir Jagr, who then seemed like Gretzky’s heir apparent, scored the decisive goal. For that final game, the league gave permission for the number “99” to be painted behind each net in a tribute to Gretzky’s signature play.

Gretzky’s comments about that game later on were characteristically gracious. In an interview with Scott Morrison of “Hockey Night in Canada,” he said: “My last game in New York was my greatest day in hockey…Everything you enjoy about the sport of hockey as a kid, driving to practice with mom and dad, driving to the game with mom and dad, looking in the stands and seeing your mom and dad and your friends, that all came together in that last game in New York.”

George Kalinsky’s now iconic picture of Gretzky waving to the Rangers’ fans that day in Madison Square Garden is one of my favorite sports pictures. 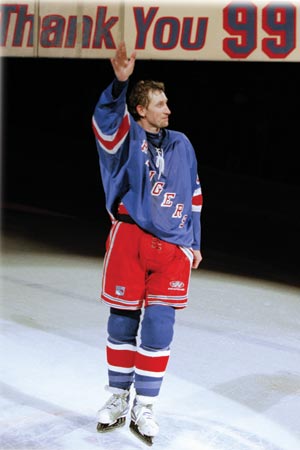 I have only one Rangers replica jersey. It’s back in my storage space in New York — a number “99” jersey. I think maybe I’ll dig it out and take it for a twirl on the ice here or in Dubai this fall.

I hope that Gretzky enjoyed dropping the ceremonial first puck before the third game of this year’s final and that he drew some satisfaction from what the Kings achieved this year. If it couldn’t be the Rangers, I’m glad it was the Kings.

More: read Sean Hartnett’s remembrance of the Gretzky’s years with the Rangers, published earlier this year on the occasion of the Great One’s 51st birthday.

[Photo credit: Gretzky in his “office” during a game against the Los Angeles Kings during the 1986-87 season: ALLSPORT USA/Getty Images]