As I write in the waning hours of June 20, we are still 3 hours from the June solstice, which (according to the Seasons Calculator at timeanddate.com) is due to take place locally at 3:08 GST on June 21.

I grew up calling it the “summer solstice,” but that, I now realize, reflects my  Northern Hemispherocentrism. The correct term is “June Solstice” (after all, it’s winter down below the equator).

Here in the Northern Hemisphere, of course, the June solstice is the longest day of the year and the traditional start of summer. There’s a nice article at timeanddate.com that tells you all about it. And National Geographic can tell you why the solstice is actually “early” this year.

Even though the solstice is the traditional start of summer in the N.H., when you’re on a university teaching schedule, summer generally begins in mid-May (when grades are turned in). Some of our students started their summers, for all intents and purposes, rather earlier than that.

Most of us professor-types don’t equate “summer” with “vacation,” however, contrary to what many U.S. lawmakers may believe. Au contraire: for us it’s “the time when we can get ‘our own’ work done.” There’s usually some “vacation” involved at some point, but it’s rarely guilt-free. Most of us professor types get the sinking feeling, once the Fourth of July hits, that “SUMMER IS PRACTICALLY OVER AND I’VE GOTTEN NOTHING DONE.” Ah, the demands of scholarship!

Here in Abu Dhabi, of course, we don’t have the sharply defined season that they have back in New York. A New Yorker would think that it’s pretty much summer all the time here. Winter in Abu Dhabi is like May or June in New York, on those days when the humidity is low and there’s no rain. Summer is like the worst, most humid but still rainless New York day in late July or August, but with a lot of extra degrees of temperature heaped on.

My colleagues in New York are writing “Stay cool” to one another in their e-mails today, because it’s nearly 100 F back there in the City.

Well, it’s nearly 100 F here in Abu Dhabi too — the difference is that it’s  nearly midnight! 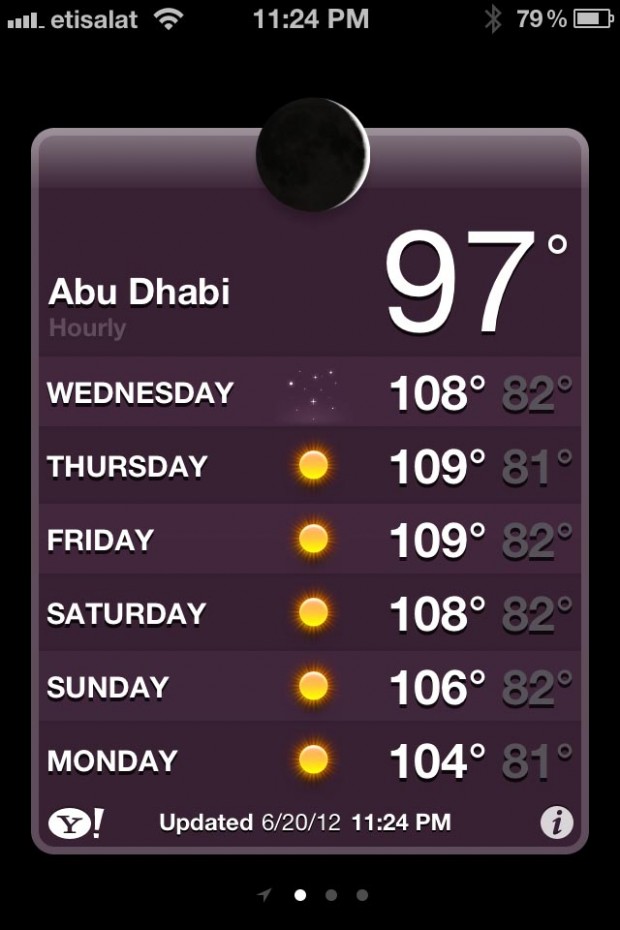 Happy Summer everyone! (And don’t, worry, NYUAD colleagues: Marhaba Week is still more than 2 months away!)