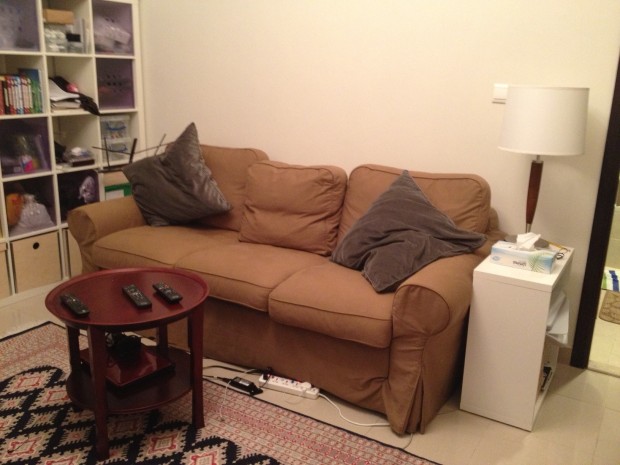 Well, the good news is that I don’t have to sleep on the couch tonight and then wake up to the sound of my iPhone alarm at 4:00 a.m.

The bad news: I really wanted to have a reason to sleep on the couch tonight and then wake up to the sound of my iPhone alarm at 4:00 a.m. as I’d been doing roughly every other night since mid-April (with the exception of the week that Wife was away on business in New York).

Let me state straightaway that the reason for my sojourns on the sofa had nothing to do with marital discord or excessive snoring. (I’m told I do snore on occasion, but not with sufficient frequency or volume to warrant banishment to another room.) No, my voluntary relocation to the couch was a matter of devotion: to my wife and to the New York Rangers hockey team. I’ve been following the Rangers through good times and bad since 1973, and I remember the heady days of the 1994 Stanley Cup run as if they were yesterday rather than eighteen (gasp!) years ago. So when the team began to look like actual contenders for this year’s Cup, I determined to show my devotion by getting up to watch the games on nhl.com. Almost all of the games would be evening games, with start times of 7:00, 7:30, or 8:00 p.m. EDT — which translates to 3:00, 3:30, or 4:00 a.m. Gulf Standard time.

But Wife has trouble getting back to sleep these days if awakened in the middle of the night, so off to the couch I went. I’d had some experience with this practice, having spent nearly two months on the couch when my younger son was a few months old and developed a tendency to wake up in the middle of the night, consolable only by his mother and none too quick to fall back asleep. No point in both of us being up at all hours, Wife argued.

Waking up in the middle of the night to watch a hockey game is fine when your team wins, as the Rangers did ten times between April 12 and May 26, sometimes thrillingly. But when they lose — well, it puts a real damper on your day. And through two seven-game series the Rangers provided quite a number of bad days mixed in with the good.

Even though the Rangers found themselves down 3 games to 2 in their third-round series against the New Jersey Devils and gave up two goals in the first period of Game Six on May 26, I fully expected them to win that game and the next and to be playing in the finals tonight against the Los Angeles Kings. I mean, the signs were all there: hadn’t the Rangers gone down two goals in 1994’s Game Six against the Devils, before Alexei Kovalev got them on the board and then Mark Messier almost single-handedly made good on what was later billed as his “guarantee” of victory? So when the Rangers 2012 captain Ryan Callahan tied up the game in the second period, I felt certain that the Rangers would take the lead in the third period and cap it off with an empty-netter.

Not to be. History did not repeat itself. Instead, the Devils managed to exorcize an old ghost. The Devils may have won three Stanley Cups after the Rangers won theirs in 1994, but in none of those runs did the Devils have to defeat the Rangers to advance.

In truth, the Rangers always seemed a step behind the Devils in this year’s series, even in the games that they won, perhaps the result of having played so many games in the previous two rounds. But you had the feeling (if you were a Rangers fan) that they’d find a way, particularly when the dominated long stretches late in Games 5 and 6. But that go-ahead goal remained elusive, and as I warned my older son (whom I’d awakened to catch the third period of Game 6), lots of domination without scoring often results in a sudden chance for the other team.

So tonight I go to bed at my usual hour, and tomorrow I will awaken at my usual hour, which happens to be 6:00 a.m. Probably in time to catch the third period of Kings-Devils. Here’s hoping that I wake up to a commanding Kings’ lead.