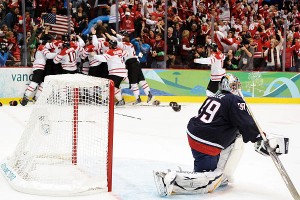 I watch professional sports for the narratives they produce. In the pilot for the series Friday Night Lights, which is about big-time football in a small Texas town, the coach’s daughter, who is reading Moby-Dick in her English class, tells her father: “Moby-Dick is actually the perfect metaphor for this town. The cold black sea representing the season in all its uncertainties. The magical white whale is the Holy Grail.” Her dad gets the reference and realizes that if she’s right, then he’s Ahab.

I knew I would like the show once I heard those lines, not only because I love Moby-Dick, but also because I agree with Julie’s suggestion. A sports season is a narrative, sometimes dull, sometimes compelling, sometimes even sublime. The same is true for a single game or contest. And what I call is “the athletic sublime” is a climactic narrative moment when a player lives up to and exceeds all expectations.

Take today’s Olympic Gold Medal game, for example. If you’d been watching a film that dramatized its events, you’d have called it unbelievable, even corny. Team Canada, under tremendous pressure to win the gold medal at an Olympics held on Canadian soil, had lost to Team USA earlier in the tournament, forcing them to play an extra game in order to make the quarterfinals. They’d almost blown a 3-0 lead to Slovakia in the final seconds of its semifinal match, and tonight they did blow a 2-0 lead, as Zach Parise, the most dynamic U.S. player throughout the tournament, scored the equalizer with some 20 seconds left and the US goalie pulled for an extra skater.

I was due at an English Department event earlier in the evening, but stayed at home watching until the end of regulation. But, as I was walking along 14th Street, I noticed the game on a widescreen television in a nail salon and paused to watch. I’d told our babysitter that the four-on-four format for the overtime would favor Canada, which had some highly skilled skaters on its roster, most notably Sidney Crosby, the so-called “Next One,” the heir apparent to “the Great One,” Wayne Gretzky.

Crosby was mostly a non-factor during the tournament, perhaps due to the fact that Team Canada was built for an old-fashioned Canadian game that emphasized fierceness over than flair: this year, the tournament was being played on NHL-sized rinks which are smaller than the international rinks usually used in the Olympics. I always love watching the Olympic tournament precisely because the larger rinks bring out the artistry of the skilled player, with fleet passing and deft skating trumping crunching bodychecks. Not so this year, but as a result Crosby didn’t seem to find a way to shine.

Until, with seven minutes gone in the overtime, Crosby finds the puck on his stick after a quick cycle and pass from Jarome Iginla. Canada, as I suspected, had been dominating the overtime. A flash of Crosby’s stick, and the puck was behind goalie Ryan Miller. Canada had its goal. Miller would be named the tournament MVP, but it was Crosby who turned out to be larger-than-life.

I would have preferred a U.S. win, which would have made Parise’s goal one of the most significant moments in the history of U.S. hockey, maybe even in U.S. international athletics.

But it’s a better story this way.

[Photo: Harry How/Getty Images from the account of the game posted at espn.com]