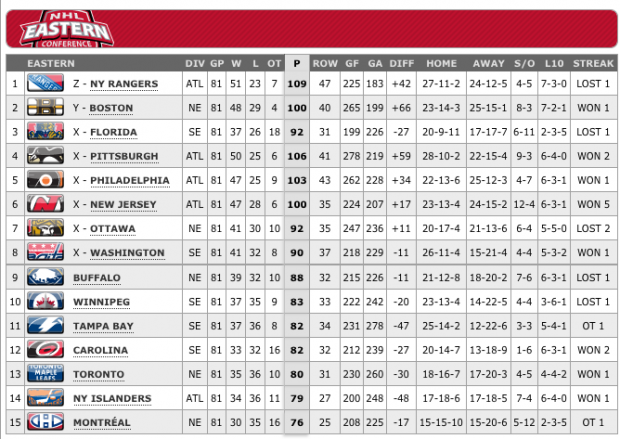 I may be living in the Middle East, but I’m still a dyed-in-the wool New Yorker.

And it’s a rare moment for a New York sports fan of my persuasion: both of my favorite teams are in first place. That would be the New York Rangers (hockey) and the New York Mets (baseball). It won’t last, so I’m savoring the moment.

I’ve been following the Rangers since 1973, suffering through many ups and downs. This year, though, the Rangers have had a spellbinding season, after quite a number of recent disappointments. They’ve built a team around a core of younger players mixed with a few bona fide stars: goalie Henrik Lundquist and forwards Marian Gaborik and Brad Richards. Here’s the best thing about the team: it’s talented and gritty, as shown by its commitment to blocking shots. (Would you put your body, even in hockey pads, in front of a slap shot traveling at about 100 mph?) With two games left in the season, they clinched first place in their conference, guaranteeing home-ice advantage in the playoffs until the Stanley Cup Finals. And, who knows, if they win tomorrow, they might even get that. The Rangers last clinched first place in the Eastern Conference in 1994, the magical spring in which they won the Stanley Cup for the first time in 40 years. They have a very good chance to repeat that feat this year, though as every hockey fan knows, the Stanley Cup playoffs is a second season altogether, grueling and unpredictable. But wouldn’t it be glorious, if Madison Square Garden could witness a moment like this one again:

I’ve been following the New York Mets even longer — since 1969 when I was in second grade and watched them win the World Series on a black-and-white television in the hallway of my elementary school. I’ve suffered a lot because of the Mets too, as readers of this blog know from my post “The Crypto-History of the Historic Collapse of the New York Mets.” (I really should update that post to take the humiliation of the Bernie Madoff era into account!) But today they’re in first place, having won their home opener 1-0 behind the pitching of Johann Santana and David Wright. The possibilities seem limitless.

Let me dream a bit. I’m well aware that the team’s spring training record was an abysmal 9-20-2, the 20th a loss to the Yankees in a game that the Mets were leading until the 7th inning. So, starting tomorrow, it’s probably all down hill. But right now, it looks like this:

Thanks to the magic of twenty-first century technology, I can stream the teams’ games in HD over the internet by subscribing to Gamecenter at nhl.com and to mlb.tv. The picture quality is amazingly good — good enough to watch on my big LED HD television. Afternoon baseball games turn into night games here, which is fine, but those 7:00 p.m. hockey starts are going to take their toll. (We’re 8 hours ahead, so you do the math.) But, hey, our school year ends in mid-May, and I fully expect the Rangers to be playing well beyond that. And if they do, I’ll be getting up at 3:00 a.m. cheerfully.